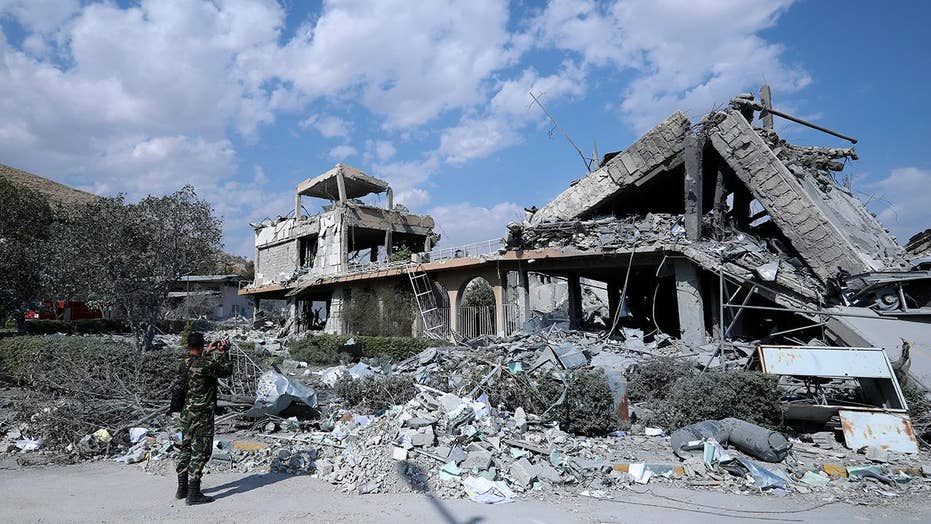 Is another US airstrike on Syria imminent?

Officials in Syria and Russia allegedly blocked investigators from entering the scene of a suspected chemical attack, a watchdog group said Monday.

The Organization for the Prohibition of Chemical Weapons (OPCW) said that officials from both countries have cited “pending security issues” for preventing the independent watchdog from entering Douma, the Syrian city where U.S. and French authorities believe a poison gas attack occurred on April 7.

US MISSILE ATTACK ON SYRIA CAPTURED IN STUNNING PENTAGON VIDEO

Instead of inviting them to enter the city, Syrian officials have offered them the chance to interview 22 people as witnesses, Ahmet Uzumcu, Director-General of OPCW, told an executive council meeting of the group on Monday.

He added that he hoped "all necessary arrangements will be made ... to allow the team to deploy to Douma as soon as possible."

Israel is closely monitoring the events in Syria in the aftermath of the U.S. airstrikes; David Lee Miller reports from Golan Heights, Israel near the Syrian border.

The U.S. and France, along with Syrian activists, rescuers and medics, have said the poison gas attack in Douma, led by the regime of Syrian President Bashar al-Assad, killed at least 40 people and injured more than 500, a rebel-held town located roughly 6 miles northeast of the Syrian capital of Damascus.

President Trump labeled Assad’s actions, which resumed amid an offensive by Syrian government forces after the collapse of a truce, “are not the actions of a man,” but “are the crimes of a monster instead.”

In response to the attack, U.S., U.K. and French forces launched precision military strikes in Syria, targeting three locations which the Pentagon said made up the heart of Assad’s programs to develop and produce chemical weapons.

Russian Deputy Foreign Minister Sergei Ryabkov suggested Monday that OPCW inspectors couldn’t get quick approval to visit the site of the alleged attack because of airstrikes from the West.

A man rides past destruction in the town of Douma, the site of a suspected chemical weapons attack, near Damascus, Syria, Monday, April 16, 2018. (AP Photo/Hassan Ammar)

"As far as I understand, what is hampering a speedy resolution of this problem is the consequences of the illegal, unlawful military action that Great Britain and other countries conducted on Saturday," Ryabkov said.

However, United Nations spokesman Stephane Dujarric said the U.N. has "provided the necessary clearances for the OPCW team to go about its work in Douma. We have not denied the team any request for it to go to Douma,” and U.N. Secretary-General Antonio Guterres last week reaffirmed his support for an OPCW investigation.

Government forces and Russian troops have been deployed in Douma, which is now controlled by the Syrian government. Opposition activists have said the troops might have removed any evidence of chemical weapons' use, a claim Russian Foreign Minister Sergey Lavrov has called false.

Discussions over the suspected site of the chemical attack come after Syrian state-run television reported that Syrian air defenses were confronting a new “aggression” over Homs, where the Shayrat Air Base is located, but did not say who carried out the alleged airstrikes.

But Pentagon spokesman Marine Maj. Adrian Rankine-Galloway told Fox News on Monday that “There are no US or Coalition operations in that area [Homs],” adding: “We don’t have anything additional to provide.”

Fox News’ Lucas Tomlinson, Kathleen Joyce, along with The Associated Press, contributed to this report.