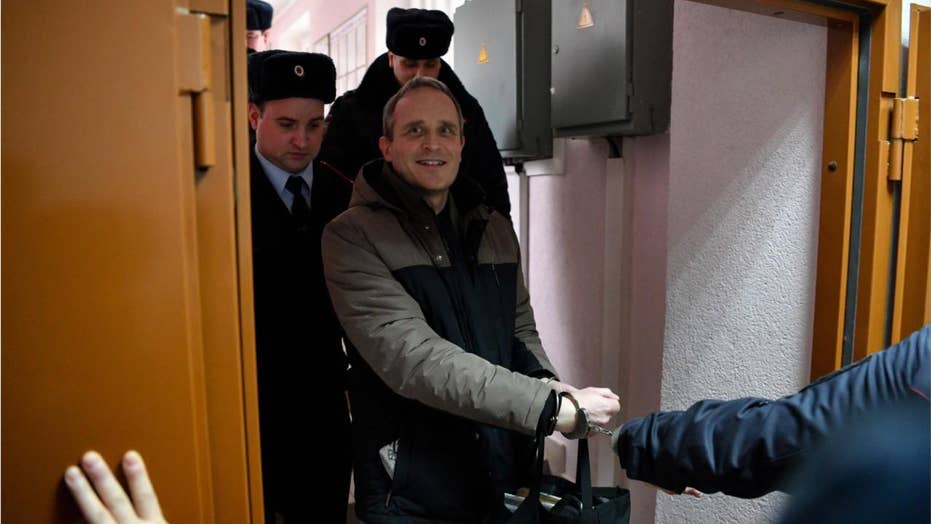 Russia sentences Jehovah's Witness to 6 years in prison for 'extremism'

Dennis Christensen was arrested in May 2017 after a police raid on his congregation just south of Moscow. He was found guilty of extremism.

"I do not agree with this judgment, it's a big mistake," Christensen told reporters after being led away in handcuffs in the city of Oryol.

His wife Irina Christensen added: "I'm really sad that such a thing is happening in Russia, very sad. The same thing could happen to any of us."

Russia banned Jehovah's Witnesses in 2017 and declared the religious group an extremist organization. Nearly 100 of the church's members face charges and there are currently about 20 members in prison and awaiting trial.

Christensen, a 46-year-old builder, was leading a local Bible reading when he was arrested. He is the first member of the Jehovah's Witness to be sentenced for extremism, Tanya Lokshina, the Moscow-based associate director for Human Rights Watch’s Europe and Central Asia division, told The Washington Post.

“Six years in jail for peacefully practicing your own religion is something that comes right out of the history book on Soviet dissent,” Lokshina said. “It sends a very strong signal to all those who are ready to stand up that there will be no mercy.”

Yaroslay Sivulsky, a representative of the European Association of Jehova's Witnesses, said Christensen will appeal the decision.

“We deeply regret the conviction of Dennis Christensen,” Sivulsky said in a statement. “An innocent man who did not commit any real crime was convicted. It is sad that reading the Bible, preaching, and living a moral way of life is again a criminal offense in Russia.”

The religious group got a glimmer of hope in December when President Vladimir Putin publicly pledged to look into the reported persecution of Jehovah’s Witnesses, calling extremism charges against the religion’s adherents “nonsense.”

But Putin’s spokesman Dmitry Peskov, when asked about the case after the verdict, was unable to say if Putin had looked into the matter and had no comment on the ruling Wednesday.

Amnesty International has said that it considers Christensen and other Jehovah’s Witnesses on trial as prisoners of conscience.

Christensen’s lawyer Anton Bogdanov said that he will likely file an appeal within 10 days after discussing the matter with his client.

“The man was sentenced to six years behind bars, because he, along with others of the same religious beliefs, read the Bible and spread their religious views,” Bogdanov said.