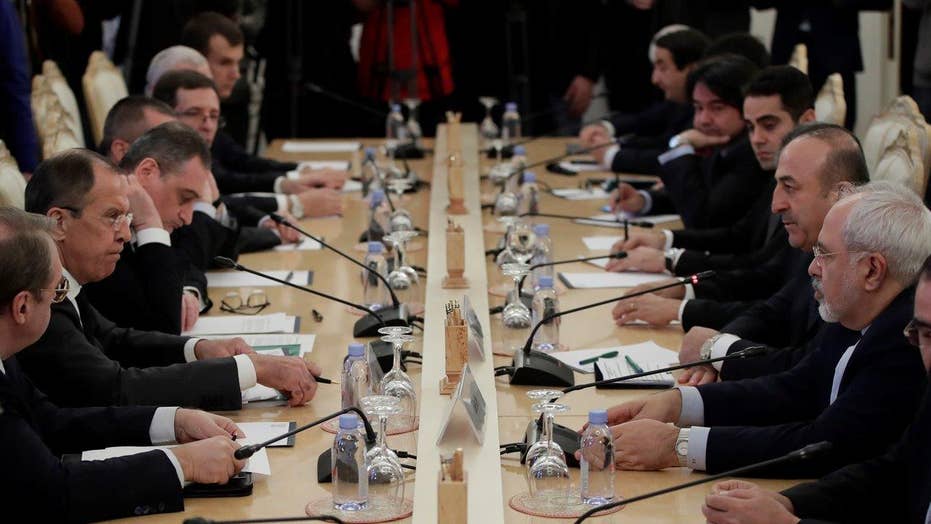 US not invited to Syria talks in Moscow

BEIRUT – Russia, Iran, and Turkey are ready to act as guarantors to a future settlement between the Syrian government and the opposition, Russian Foreign Minister Sergey Lavrov said Tuesday, as hundreds more residents left the opposition's last foothold in eastern Aleppo.

The announcement from Moscow underscored Turkey's position as a key broker in the Syria conflict, after it mediated last week's agreement with Russia to have the opposition surrender its presence in Aleppo, Syria's largest city.

The United States was notably absent from the meeting between the foreign ministers of Turkey, Russia, and Iran.

Moscow is a staunch ally of Syrian President Bashar Assad, while Ankara sponsors the rebels seeking to topple him.

The talks in the Russian capital were a sign that the two countries wanted to keep their ties on track after the dramatic assassination of Russia's ambassador to Turkey the previous night by an Ankara policeman. After killing his victim, the shooter cried out, "Don't forget Aleppo! Don't forget Syria!" — a reference to Moscow's role in backing Syria's assault on the city politically and militarily with airstrikes.

In Aleppo, a fleet of buses entered east Aleppo again Tuesday afternoon to evacuate the remaining rebels and civilians from the city, activists said.

Opposition media activist Ahmad Primo said the fleet could well be the last one to leave the city. He spoke to The Associated Press from the Rashideen crossing between government and rebel-held territory in the Aleppo countryside. Primo estimated 2,000 people remain awaiting evacuation.

The Britain-based Syrian Observatory for Human Rights said 60 buses were sent to pick up 3,000 gunmen and civilians remaining.

Residents from eastern Aleppo and the Syrian opposition say the evacuation amounts to forced displacement. Months of devastating Syrian and Russian air raids that destroyed buildings, hospitals and schools in the enclave — and reduced much of eastern Aleppo to rubble — left the residents with little choice but to flee.

The precise number of people seeking evacuation — and who have already left — has never been clear.

Observatory head Rami Aburrahman said 17,000 civilians and 5,000 fighters have left; the International Committee of the Red Cross, which has overseen the evacuations, said 25,000 have left; and the Turkish Foreign Ministry's figure is 37,000.

Lavrov said in Moscow that the evacuations could continue for another one or two days.

Abdurrahman said the fate of 70 pro-government fighters taken prisoner by rebels over the course of four years of fighting over the rebel enclave remains unknown. He says they were supposed to be handed over to the government as part of an agreement to allow the opposition to evacuate the city

The Lebanese militant group Hezbollah, which is fighting alongside Syrian President Bashar Assad forces, warned the remaining residents in the rebel enclave on Tuesday to leave "as quickly as possible" in statements broadcast by a Hezbollah media arm.

Dmitry Peskov, the spokesman for Russian President Vladimir Putin, said the killing of Russian Ambassador Andrei Karlov in the shooting Monday night in Ankara plays into the hands of those who want to derail peace talks for Syria and "drive a wedge between Russia and Turkey."

The development followed a U.N. Security Council resolution that was agreed on Monday night to send observers to monitor the exodus.

Syrian state media meanwhile said several more buses had arrived to the government-controlled Aleppo countryside after evacuating the sick and wounded from the rebel-besieged Shiite villages of Foua and Kfarya.

The swap evacuations are part of the Aleppo cease-fire deal; Syrian rebels besieging the two villages agreed to allow over 2,000 people to leave from there in exchange for the government allowing civilians and rebels to leave eastern Aleppo.

The taking of all of eastern Aleppo would mark Assad's greatest victory since the 2011 uprising against his family's four-decade rule, but the cost has been staggering. Thousands of people have been killed and hundreds of thousands more have been displaced, many of whom may never return.

Also, Syria's civil war is far from over; the opposition still controls the northwestern Idlib province and pockets of territory elsewhere in the country, while the Islamic State group rules a large swath of the northeast.