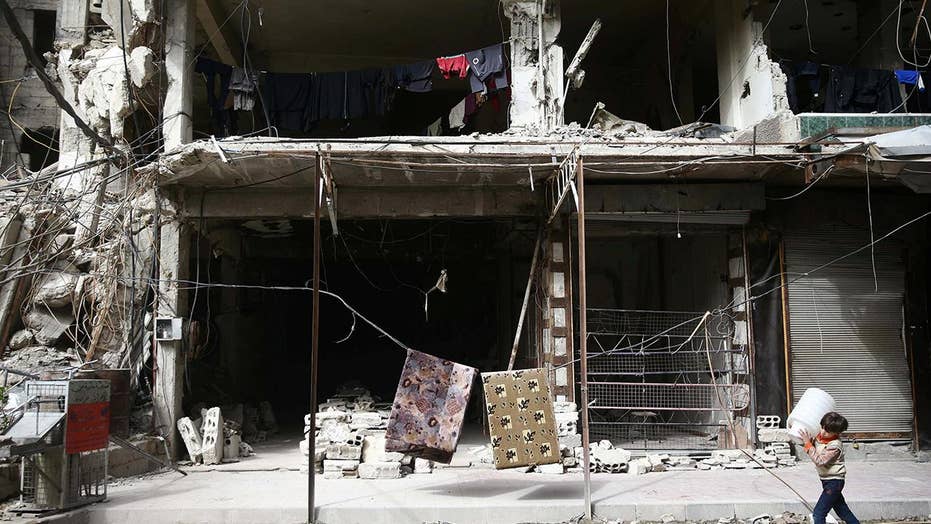 Relentless strikes by government forces in Syria has led to crisis in Eastern Ghouta; Conor Powell reports from Jerusalem.

Russia used a procedural vote to halt a United Nations Security Council meeting from taking place Monday on the human rights crisis in Syria -- but other members including the United States outmaneuvered the Russians by calling for an informal meeting.

Russia, which has consistently protected its ally Syria in the council chamber, claimed that the issue of human rights was not a subject on the council’s agenda and forced a vote. The council could not reach nine votes for the meeting to proceed; China, Kazakhstan and Bolivia voted with Russia while the three African members on the council abstained.

While obviously angered by the Russian vote, France, Britain, Sweden and the U.S. called for an informal Security Council meeting where all who wanted to listen to a briefing on the human rights situation in Syria could do so.

At the informal meeting, the U.N. Human Rights commissioner, Prince Zeid Ra’ad Al Hussein, criticized the Security Council for not doing enough for Syria. “The Security Council has not lived up to the sacrifice of these heroes in Syria, it has not taken decisive action to defend human rights and prevent further loss of life despite the absolutely shameful conduct that has marked this conflict from the outset,” he said.

Al Hussein said the Syrian regime’s siege of Eastern Ghouta “involved pervasive war crimes,” noting “the use of chemical weaponry, enforced starvation as a weapon of warfare and the denial of essential and life-saving aid.”

French Ambassador to the U.N. Francois Delattre, who chaired the meeting, said that just three convoys had gotten through to those in need since U.N. Security Council resolution 2401 passed last month, calling for a humanitarian ceasefire.

U.S. Representative to the U.N. Economic and Social Council Kelley Currie responded, “The depth of depravity to which the Syrian government and its backers will sink is unfathomable. Of course, for a regime that is willing to systematically torture its own people, its own children, starving them is nothing.”

She continued, “The Assad regime, along with its backers in Moscow and Tehran, should immediately adhere to the Resolution 2401 ceasefire, cease their hostilities, and allow unfettered humanitarian access.”

Britain’s U.N. Ambassador Jonathan Allen said Russia’s claim that Human Rights was not a topic for the Security Council was wrong and noted that the ceasefire resolution specifically referenced the importance of human rights and international human rights law.

Allen said he was not surprised that Russia did not want the Security Council to meet on Syria, saying, “The truth of what is happening in Syria is deeply uncomfortable for all who protect Assad.”

The letter threatened action if there was no immediate change. It said, “If Member States do not implement this resolution, it is imperative that this Council immediately pursue decisive action to achieve a full cessation of hostilities throughout Syria, to facilitate humanitarian access, and to protect the Syrian people.”

Since Security Council Resolution 2401 was passed, some 1,700 civilians have been killed in Eastern Ghouta, according to Syrian monitoring groups. On Monday, opposition groups reported that napalm was unleashed on civilians killing up to 60 people.

U.S. Ambassador to the United Nations Nikki Haley announced last week that the U.S. has been working on a new draft resolution that would seek to implement an immediate ceasefire. So far that draft resolution has not been put up for a vote but diplomats tell Fox News it could come up for a vote sometime this week.