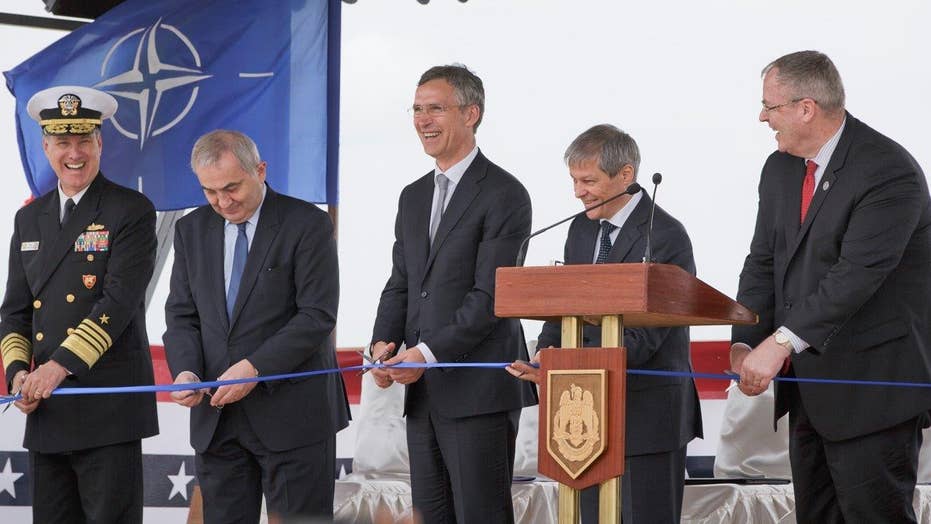 US activating missile shield base in Romania angers Russia

The Dnepr Missile Launch Detection System is located in Crimea, which Russia took over from Ukraine in 2014. Once upgraded, it would be able to detect hypersonic, ballistic and cruise missiles from the Mediterranean and Black Seas, Pravda reported.

Moscow had cried foul over the NATO program, even though U.S. officials said it would fend off missile threats from Iran. "The threat is gone, but the creation of the missile defense system is continuing," President Vladimir Putin said Friday.

The NATO system includes a site in Romania that became operational Thursday and a site in northern Poland where U.S. and Polish officials broke ground Friday for a facility due to be ready in 2018.

Putin said Russia "will do everything needed to ensure and preserve the strategic balance, which is the most reliable guarantee from large-scale military conflicts," but will not get drawn into an arms race.

In another potential response, the military has talked about stationing its state-of-the art Iskander missiles to Russia's westernmost Baltic outpost of Kaliningrad, which borders NATO members Poland and Lithuania. Last year, the missiles were airlifted there during military maneuvers in a demonstration of their swift deployment capability, but were pulled back to their permanent base after the drills.

The Iskander missiles, which have a range of up to 300 miles, would put most of Poland in reach if deployed from the Kaliningrad region.

Dmitry Rogozin, a deputy prime minister in charge of military industries, said after the meeting with Putin that Russia will use technologies that would allow it to "neutralize any threat with minimal resources." He didn't elaborate.

Russia has long described the U.S.-led missile shield as a top security challenge. Russian military officials have said while the current system doesn't pose a threat to Russia's massive nuclear missile force, it could erode the nation's nuclear deterrent when it grows more powerful in the future.

"They aren't defensive systems, they are part of the U.S. strategic nuclear potential deployed on the periphery, in eastern Europe," Putin said. "Now, after the deployment of those missile defense elements, we will have to think about how we can fend off the threats to the Russian Federation's security."