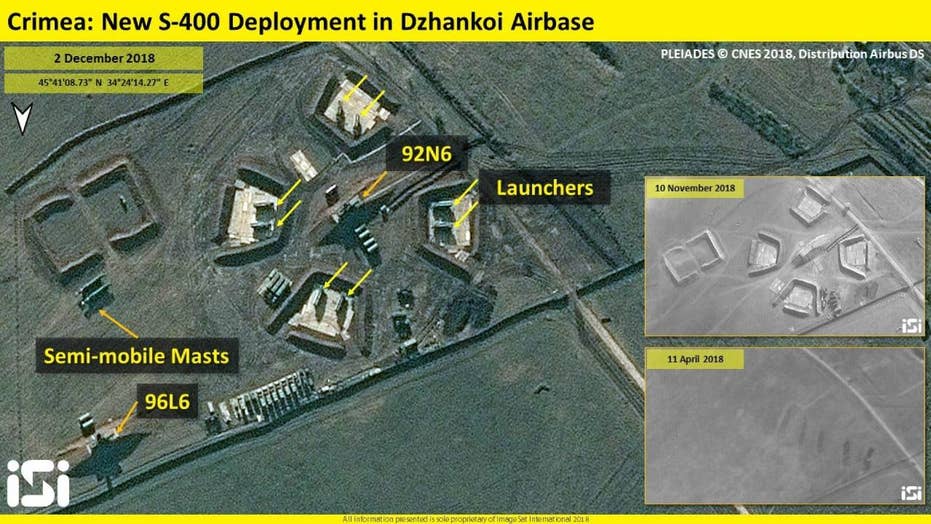 The intelligence report by ImageSat International indicates that the infrastructure for the S-400 battery was prepared in recent months, a long time before last weekend's naval encounters that sparked new tension between Russia and Ukraine.

The images showed a bare ground in April 2018, and construction by November 10 – two weeks before the recent escalation.

The infrastructure for the S-400 battery was prepared in recent months, a long time before the incident that sparked the new tension between Russia and Ukraine. (ImageSat International)

The image captured Sunday confirms the deployment. The eight launchers of the S-400 battery are divided into four, which are located in the southwest area of the airbase -- as well as two radar systems and several trucks nearby. One of them is suspected to carry S-400 missiles.

The mobile S-400 missile has a range of up to almost 250 miles and can climb to an altitude of almost 19 miles. It's intended to bring down a variety of aerial threats, from aircraft to cruise and ballistic missiles.

The images show a bare ground followed by construction – before the recent escalation between Russia and Ukraine. (ImageSat International)

On November 28, 2018, the Russian defense ministry issued a statement, days after Russian warships seized multiple Ukrainian naval vessels, escalating the conflict with Ukraine over the land Russia annexed in 2014.