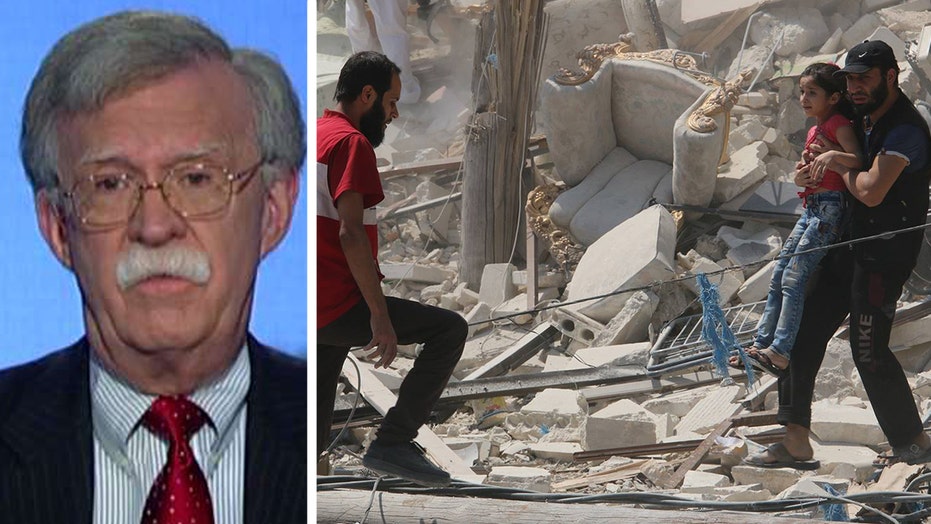 Bolton blasts WH as talks break down with Russia over Syria

EXCLUSIVE: Russia has deployed an advanced anti-missile system to Syria for the first time, three US officials tell Fox News, the latest indication that Moscow continues to ramp up its military operations in Syria in support of President Bashar al-Assad.

It comes after Russia's actions led to the collapse of a cease-fire and the cut-off of direct talks with the U.S.

While Moscow’s motives are not certain, officials say the new weapon system could potentially counter any American cruise missile attack in Syria.

Components of the SA-23 Gladiator anti-missile and anti-aircraft system, which has a range of roughly 150 miles, arrived over the weekend “on the docks” of a Russian naval base along Syria’s Mediterranean coastal city of Tartus, two US officials said.

It is the first time Russia has deployed the SA-23 system outside its borders, according to one Western official citing a recent intelligence assessment. The missiles and associated components are still in their crates and are not yet operational, according to the officials.

The U.S. intelligence community has been observing the shipment of the SA-23 inside Russia in recent weeks, according to one official.

While the purpose is not clear, one US official asked sarcastically, “Nusra doesn’t have an air force do they?” speaking about the Al Qaeda-linked group in Syria.  The Islamic State also does not fly any manned aircraft or possess cruise missiles, in a sign that Russia is directing its actions to protect itself against any potential attack from the United States or its allies.

The SA-23 can fire two different types of missiles. A smaller missile is used against aircraft and cruise missiles and is known by NATO as Gladiator. The larger missile is used against intermediate-range ballistic missiles and jamming aircraft and is known as Giant. Both missiles use the same type of warhead containing over 300 pounds of explosives, according to military-today.com.

Three years ago, President Obama weighed military action against the Assad regime’s chemical weapons facilities as well as airbases housing the regime’s attack helicopters and jets. US Navy ships in the eastern Mediterranean were prepared to launch Tomahawk cruise missiles in a limited strike to cripple the regime.

Russia deployed a separate air defense system, the S-400, to Syria after a Russian jet was shot down by a Turkish warplane last November.  Since the S-400 deployment, the U.S. military has been careful about flying  manned aircraft inside the range of the system, despite repeated pledges by the US military that its airstrikes in Syria are focused on ISIS, not the Assad regime.

Monday, the Pentagon announced it conducted an airstrike potentially killing a “prominent” al-Qaeda linked operative in Syria.  Officials said they were still assessing the strike and have not released the name of their target.

Hours after the State Department announced it was cutting off talks with Moscow, President Vladimir Putin said he had suspended a Russia-U.S. deal on the disposal of weapons-grade plutonium. Putin's decree released by the Kremlin cited Washington's "unfriendly actions."

Top US officials have recently accused Russia and the Syrian regime of indiscriminant bombing in Syria using incendiary and bunker busting bombs on civilians. Two weeks ago, a UN aid convoy was bombed, killing dozens of aid workers attempting to deliver critical supplies to the more than 200,000 Aleppo residents trapped inside the eastern portion of the city, once Syria’s most populated. In the past week, hundreds of civilians, including children, have been killed, according to local reports.

Russia began its air campaign in Syria on Sept. 30, 2015 following a weeks-long buildup of fighter jets and attack aircraft.  Long-range bombers flying from Russia and Iran have also been used to attack Syrian rebels, some backed by the United States.

Days after Russian bombs started falling in Syria, President Obama predicted that Russia and Iran would find themselves mired in a “quagmire.”

“[A]n attempt by Russia and Iran to prop up Assad and try to pacify the population is just going to get them stuck in a quagmire. And it won’t work,” he told reporters in a White House press conference on Oct. 2, 2015.

On Friday, the one-year anniversary of the Russian strikes, the State Department acknowledged that Russia had succeeded in its goal of propping up the Assad regime.

“It is a grim anniversary…It is hard not to assess that they have succeeded in bolstering the regime,” said Mark Toner, a State Dept. spokesman.