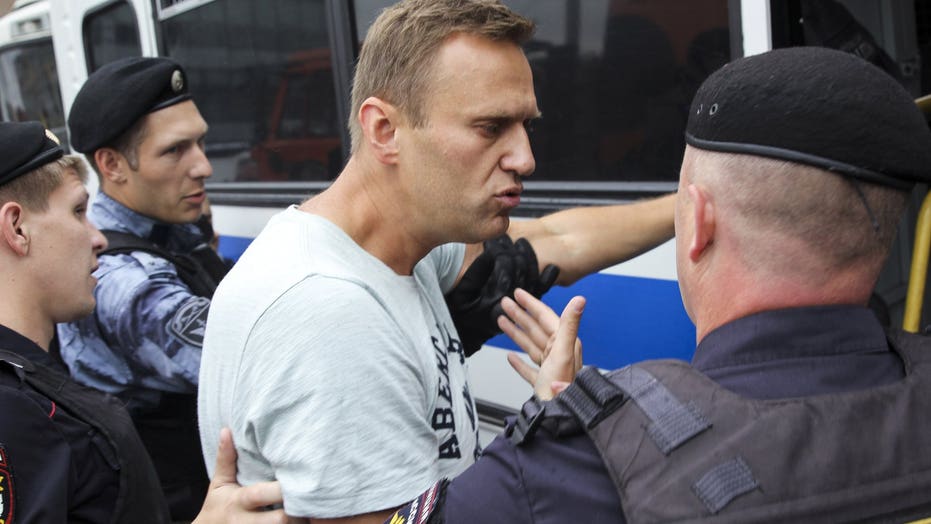 Russian authorities arrested Alexei Navalny, President Vladimir Putin’s fiercest critic, along with hundreds of other protesters who took to the streets following the arrest of a journalist.

The mass arrests on Wednesday came after thousands of people participated in an unauthorized rally in support of freedom of the press and investigative journalist Ivan Golunov who was arrested on drug charged but later released after the government admitted there was no evidence he committed a crime.

Police officers detain a protester during a march in Moscow, Russia, Wednesday, June 12, 2019. Police and hundreds of demonstrators are facing off in central Moscow at an unauthorized march against police abuse in the wake of the high-profile detention of a Russian journalist. (AP Photo/Pavel Golovkin)

“We should not stand down, even if Ivan is free. There are a number of other people in his situation in this country,” said Maxim Reznik, a member of the St. Petersburg City Council who attended a smaller demonstration in that city.

Police said over 200 people were arrested during the Moscow demonstration, though independent groups say the figure was more than 400.

The Interior Ministry said those arrested are facing charges that could bring up to 20 days in jail, according to state news agency Tass.

Police officers detain a protester during a march in Moscow, Russia, Wednesday, June 12, 2019. Police and hundreds of demonstrators are facing off in central Moscow at an unauthorized march against police abuse in the wake of the high-profile detention of a Russian journalist. More than 20 demonstrators have been detained, according to monitoring group. (AP Photo/Pavel Golovkin)

For Navalny, the 42-year-old arch nemesis of Putin and leading opposition leader, the possible jail sentence is a daily reality. He has already served numerous jail sentences for spearheading a series of unsanctioned protests across Russia.

The protester said the June 6 arrest of Golunov on bogus charges of dealing synthetic stimulants was a set-up as retaliation for his reporting on Moscow City Hall and the city’s crime-ridden funeral industry.

Prominent Russian investigative journalist Ivan Golunov, cries as he leaves a Investigative Committee building in Moscow, Russia, Tuesday, June 11, 2019. In a surprising turnaround, Russia's police chief on Tuesday dropped all charges against a prominent investigative reporter whose detention sparked public outrage and promised to go after the police officers who tried to frame the journalist as a drug-dealer. (AP Photo/Pavel Golovkin)

Police initially circulated photos of drugs allegedly taken in the journalist’s apartment, but later confessed that the images came from another case. Defense lawyers, meanwhile, said Golunov’s fingerprints weren’t on any of the drug packets allegedly found in his apartment.