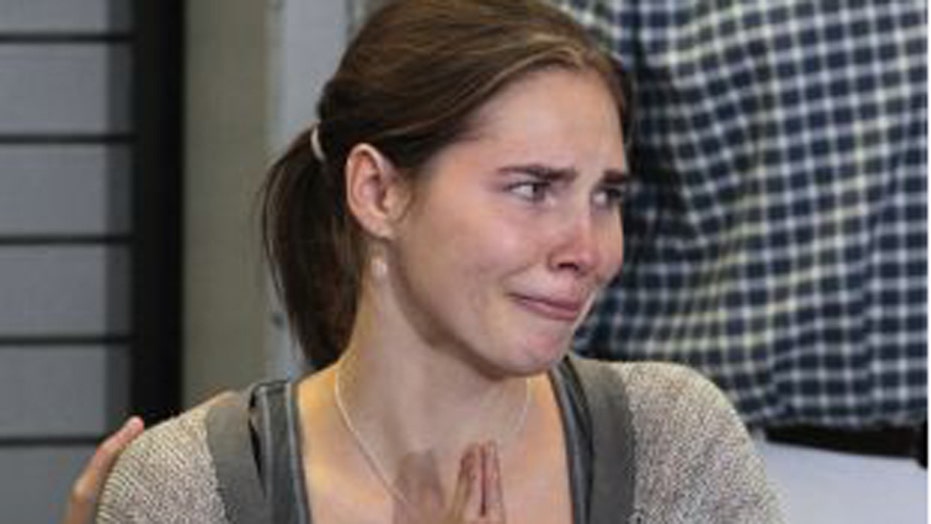 ROME – U.S. student Amanda Knox and her former Italian boyfriend have to wait another day to learn if they must stand trial yet again in Italy for the 2007 murder of her roommate.

Italy's top Court of Cassation put off until Tuesday morning its announcement of its decision on whether to definitively confirm their 2011 acquittals or throw out those verdicts and order what would be the their third trial.

Neither of the two came to court in Rome on Monday to follow the latest stage in their case. Knox was waiting for the decision in her home state of Washington, while her co-defendant and former boyfriend, Raffaele Sollecito, stayed in northern Italy to continue his studies.

The court heard six hours of arguments Monday and spent several hours deliberating that and a handful of other cases before announcing it would issue its decision at 10 a.m. (0900 GMT) Tuesday.

Italian prosecutors have asked the high court to throw out the acquittals for the murder of 21-year-old British student Meredith Kercher and order a new trial.

Kercher's body was found in November 2007 in her bedroom of the house she shared with Knox and other roommates in Perugia, an Italian university town with popular with foreign students. Her throat had been slashed.

Prosecutors have alleged that Kercher was the victim of a drug-fueled sex game gone awry Knox and Sollecito have denied wrongdoing, claiming they weren't even in the house the night of the murder.

The high court generally gives its rulings the day it hears arguments. But prosecutor general Luigi Riello told reporters that "in very complex cases, it happens" that the court takes another day.

A lawyer for Sollecito, Giulia Bongiorno, said the delay perhaps meant the court wanted `'more time to reflect" before its ruling.

Sollecito's father shrugged off the suspense.

"We have waited so many years, one night is not going to make a difference," said Francesco Sollecito after some 12 hours in the courthouse, most of that time spent standing quietly in the back of the courtroom during final pleas by both sides. He said he hadn't yet spoken by phone with his son, who was in the northern city of Verona.

Knox, meanwhile, was waiting anxiously in Seattle to hear if her long legal battle was finally over, or if another chapter still needed to be written.

"She's carefully paying attention to what will come out," attorney Luciano Ghirga told reporters. "This is a fundamental stage. The trial is very complex." Ghirga had left the courthouse when deliberations began. He had left for the day by the time the court stunned fellow lawyers by saying they'd have to wait another day.

Knox, now 25, and Sollecito, who turns 29 on Tuesday, were arrested shortly after Kercher's body was found in a pool of blood.

In a first trial, both were convicted and given long prison sentences: 26 years for Knox, 25 for Sollecito. An appeals court acquitted them in 2011, criticizing virtually the entire case mounted by prosecutors. The appellate court noted that the murder weapon was never found, said that DNA tests were faulty and that prosecutors provided no murder motive.

After nearly four years behind bars in Italy, Knox returned to her hometown of Seattle and Sollecito resumed his computer science studies, following the degree he successfully earned while studying in prison.

Knox is now a student at the University of Washington, according to her family spokesman, Dave Marriott.

Although the court on Monday heard gruesome details, including how Kercher choked on her own blood, it will not rule on the guilt or innocence of the defendants. Its sole task is to decide if the appellate trial was properly conducted.

If the Cassation Court upholds the acquittals, that ends the case for Knox and Sollecito.

But if it agrees with prosecutors that the appellate court erred -- for instance, by not allowing sufficient forensic evidence tests, as Riello contended in court Monday -- it throws out the acquittals.

It would then order a new appeals trial. In that case, that trial would be held by an appellate court in Florence, since the smaller town of Perugia only has one appellate court and it cannot hear the same case again.

Should a new trial be ordered, Italian law cannot compel Knox to return. The appellate court hearing the case could declare her in contempt of court but that carries no additional penalties.

It is unclear what would happen if she was convicted in a new appeals trial.

"If the court orders another trial, if she is convicted at that trial and if the conviction is upheld by the highest court, then Italy could seek her extradition," Knox's lawyer Carlo Dalla Vedova said.

Italy is not obliged to seek her extradition but it could decide to do so. It would then be up to the United States to decide if it honors the request. U.S. and Italian authorities could also come to a deal that would keep Knox in the United States.

Riello, the prosecutor general, argued before the court that there were ample reasons "not to bring down the curtain on the case."

Riello contended the appellate court was too dismissive in casting aside DNA evidence that led to the conviction in the lower court, arguing that another trial could make way for more definitive testing.

An attorney for Kercher family members also argued for a new trial. The lawyer, Francesco Maresca, contended that the appellate court tried to have it both ways by saying that it didn't have the scientific expertise to decide the worth of forensic evidence but also deciding which tests to order.

Defense attorneys said they were confident the acquittals would be upheld.

"We know Raffaele Sollecito is innocent," said his attorney, Giulia Bongiorno, who called the entire case "an absurd judicial process."

Before the court, Bongiorno argued there was an "unending series of errors by scientific police" in how they handled evidence in the case, including the fact that the crime scene had been disturbed "and possibly contaminated" during the investigation.

Bongiorno noted that a key piece of evidence - a clasp from Kercher's bra -- had been found 1 meter (yard) away from its original position in the bedroom when police forensic experts had gone back to the crime scene 47 days after their original inspection.

A young man from Ivory Coast, Rudy Guede, was convicted of the slaying in a separate proceeding and is serving a 16-year sentence. Kercher's family has resisted theories that Guede acted alone.

The same court also heard arguments in Knox's appeal of her slander conviction for having accused, after police interrogation, a local pub owner of carrying out the killing. The man was held for two weeks based on her allegations, but was then released for lack of evidence.

Riello argued that conviction should stand because "you cannot drag in an innocent person while exercising your right to a defense."

Knox's lawyer Dalla Vedova said the slander verdict should be thrown out because she was questioned without a lawyer even though police essentially treated Knox as a suspect in their 14 hour interrogation session.

"The girl was confused, worn out," her lawyer told the court. Dalla Vedova added that while Knox was alone, 36 investigators signed the interrogation sheet.

Because of time served in prison before the appeals level acquittals, Knox didn't have to serve any time for the slander conviction.