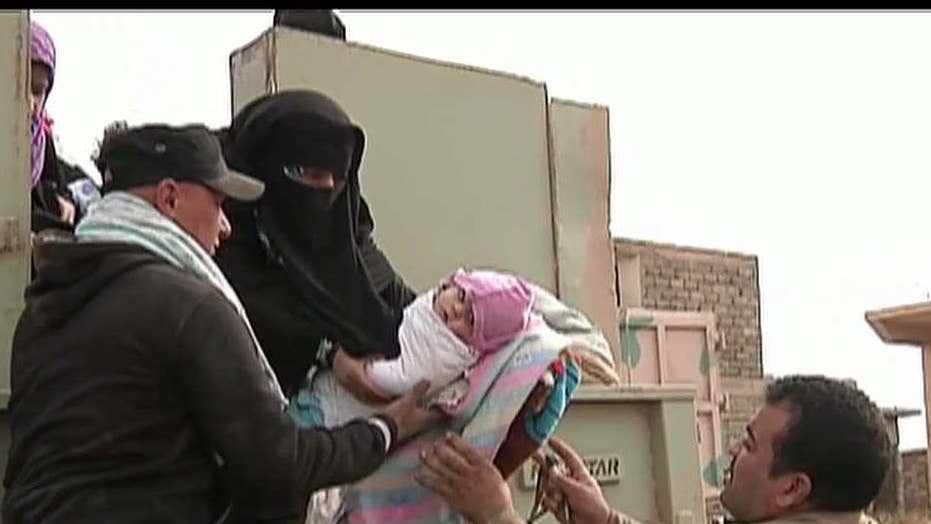 The area was supposed to have been cleared of ISIS days ago. The Gogjali district just on the Mosul city line is the main gateway into the fight against the terror group and was the first to be cleared.

But on this dusty and windy day, during a brief stop in the neighborhood, it still felt quite in the battle mix.

We heard one explosion on one side of the road. And then we heard another the other way. U.S. jet fighters circle above above. Apache helicopters buzzed by.

REPORTER'S NOTEBOOK: WINNING A TOWN BACK FROM TERROR

Driving by us, heading deeper into the city, vehicle after vehicle of Iraqi troops. Some looked very young and green. Some had the look on their faces that they did not really know what they were about to get into.

We also saw several vehicles carrying U.S. military, most certainly Special Forces, driving into the fight. They have been acting as forward spotters for U.S. air strikes, but also helping directly in the difficult urban anti-terror warfare. American boots definitely “on the ground” in this fight.

Coming out of the fight, ambulances carrying the wounded, and one private car containing injured civilians.

“You wanted to go to the front?,” one Iraqi soldier demanded of us angrily, “this is what is happening there!”

We saw first-hand more anti-ISIS efforts by Iraqi forces. Open-back trucks came to the staging area transporting civilians fleeing the fight. Iraqi troops helped women and children down to get them ready for another bus ride to a nearby refugee camp.

But the men, especially fighting-age men, were separated out, sat on the ground and their identification cards taken to be checked against an Iraqi government militant database.

There have been several incidents reported of ISIS fighters trying to mix in with the refugee flow to escape capture. I was told this pretty sophisticated system has nabbed several ISIS members.

As for the residents of the Gogjali area who are trying to stick it out, life is not easy. The neighborhood is pretty much devastated and locals rush to get any supplies brought in. “We need water,” one man demanded. Another was carrying medicine brought in by a relief agency.

And another man had a broader outlook. Looking at the few kids around us he noted, “These kids need to go school.”

Thanks to the twisted regime of ISIS, in charge since 2014, he noted the children have not been to school in years.

From the look on their faces, they haven’t had much fun either.