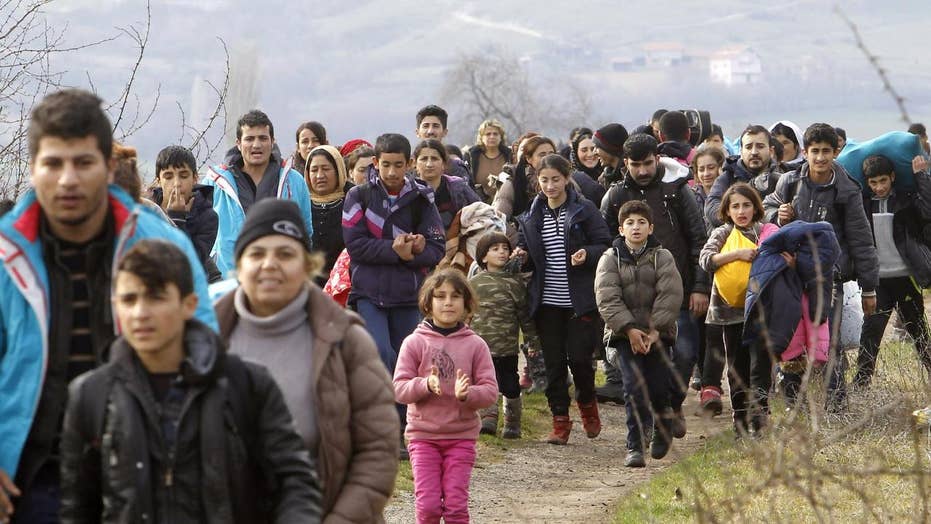 Number of refugees crossing from US to Canada soars

People seeking asylum are leaving America for Canada in unprecedented numbers. They pour in from around the globe. Some have been in the United States for just days or weeks. Others for years.

"Most of the people want to come to Canada to become Canadian citizens," said Enrique Gasse, a constable with the Royal Canadian Mounted Police (RCMP.)

More than 13,000 have crossed illegally this year, according to Canadian government data. That's more than five times the number intercepted by the RCMP in 2016.

The summer surge was dramatic, particularly in Quebec, where authorities set up a temporary camp near the border. In Montreal, officials briefly converted the former Olympic Stadium into a shelter.

NO GUARANTEE OF RESIDENCE FOR MIGRANTS FLEEING US FOR CANADA

More than 5,700 asylum seekers crossed illegally in August alone, avoiding checkpoints and the risk of being sent back to America. Most simply walk in, crossing where a rural dead end in New York meets the Canadian border.

A group of Haitian asylum seekers sit with shopping bags outside the Olympic Stadium, which was temporary used as a shelter for asylum seekers, in Montreal, Quebec, Canada August 2, 2017. (REUTERS)

Advocates say it's the contrast between the Trump administration's hardline stance on immigration vs. the welcoming image projected by Canadian Prime Minister Justin Trudeau that drives many migrants to Canada – though the country does warn there is no guarantee that status will be granted.

"The government has been accused of misleading migrants and telling them that things would be easier than they might sound," said immigration lawyer Guillaume Cliche-Rivard.

Still, he said, many migrants have few options.

Trudeau is slated to visit Washington next week but the official focus of his meeting with President Trump is expected to be on international security and trade as NAFTA negotiations continue. (AP)

"When we compare what's going on in the states, even though there is uncertainty about Canada, the uncertainty is still less than what they might be facing in the states,” he said. “When you have a lose-lose situation, you may choose the one that you're less losing."

Outside a YMCA in Montreal where migrants are housed, it's a melting pot of cultures. Families from Syria gather alongside men from Haiti and Africa. All await hearings to determine their fate.

Many stopped in America first but believe their best shot at refuge lies in Canada.

One man told us he fled his home country after his life was threatened for opposing the practice of female genital mutilation.

"My hope for the future is to seek a better life," he said. "A better future. A place where I can be free."

Trudeau is slated to visit Washington next week but the official focus of his meeting with President Trump is expected to be on international security and trade as NAFTA negotiations continue.