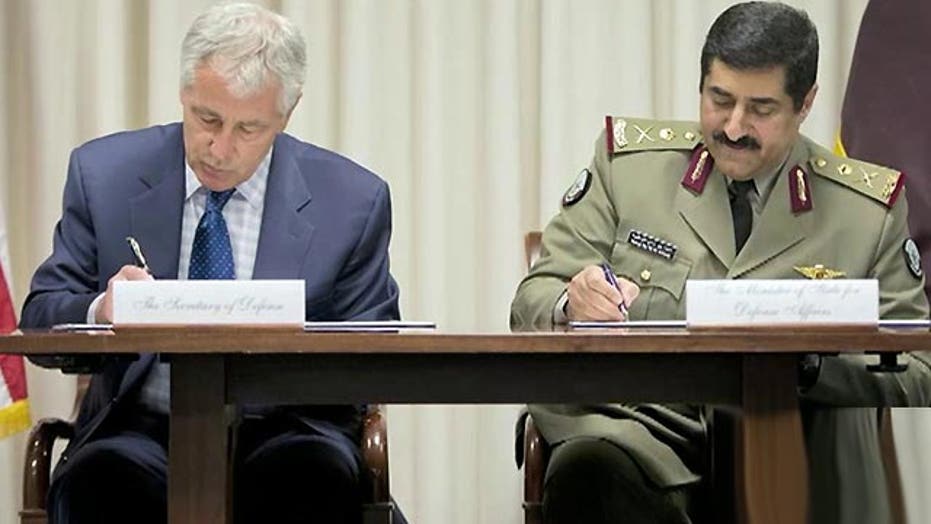 If the Middle East were one big room, Qatar would be the elephant, according to a growing number of regional experts who believe the oil rich emirate is propping up violent jihadists around the globe even as it poses as a U.S. ally and would-be broker of peace.

Israel has long complained of Qatar's alleged duplicity, accusing it of meddling, bankrolling Hamas in Gaza, exporting radical Islamic terrorism through its tight links to the Muslim Brotherhood and Al Nusra. And a German official recently suggested that Qatar may also play a role in funding Islamic State, the savage extremist group behind the beheading of U.S. journalist James Foley.

"You have to ask who is arming, who is financing ISIS troops? The key word there is Qatar - and how do we deal with these people and states politically?" German Development Minister Gerd Muller said last week.

"Qatar does not support extremist groups, including ISIS, in any way," he said in an emailed statement. "We are repelled by their views, their violent methods and their ambitions. The vision of extremist groups for the region is one that we have not, nor will ever, support in any way."

Indeed, Qatar was one of the first Middle Eastern countries to condemn Foley's murder, saying it was "a heinous crime that goes against all Islamic and humanitarian principles, as well as international laws and conventions."

Previous statements from U.S. officials indicate that they know Qatar has a multi-faceted role in the region.

“Qatar, a longtime U.S. ally, has for many years openly financed Hamas, a group that continues to undermine regional stability,” Undersecretary for Terrorism and Financial Intelligence David Cohen told the Center for New American Security on "Confronting New Threats in Terrorist Financing" in March. “Press reports indicate that the Qatari government is also supporting extremist groups operating in Syria. To say the least, this threatens to aggravate an already volatile situation in a particularly dangerous and unwelcome manner.”

Qatar is a U.S. “frenemy,” according to Jonathan Schanzer, of the Foundation for Defense of Democracies. On one hand, it hosts the biggest U.S. military base in the Middle East at Al Udeid; invests tens of billions of dollars in the U.S and across the globe in a bid to make itself indispensable and acts as the ‘white knight’ intermediary in hostage negotiations.

On the other hand, Qatar is arming and funding Hamas in Gaza, brazenly fueling violent Arab uprisings including the brief and bloody reign in Egypt of the Muslim Brotherhood and is long alleged to be arming vicious rebel groups in Libya, Mali, Syria, Iraq, and Tunisia.

“Qatar is trying to cozy up to everyone," Meir Dagan, former head of Israel’s Mossad intelligence agency, warned the U.S. in a 2010 cable revealed by Wikileaks. "I think that you should remove your bases from [Qatar]. [The Qataris] owe their security to the presence of the Americans.”

Noting that Saudi Arabia, Bahrain and the United Arab Emirates have all recalled their ambassadors from Qatar, Mort Klein, president of the Zionist Organization of America, called for Qatar to be designated a state sponsor of terrorism.

"If we can get that done, then we can stop [the sale of U.S.] defense equipment and arms to Qatar.," Klein said. "There is an $11 billion deal to Qatar right now to sell them Apache helicopters, Patriot missiles, anti-tank rockets and such. This [designation] would enable both Israeli and Arab victims of Hamas attacks to sue Qatar in the United States.”

Klein is also working to try to suspend the FAA license for Qatar government-owned airline Qatar Airways to operate in the United States, but admits that getting enough U.S. politicians to speak out is a challenge.

Qatar’s policy of involving itself in so many different spheres on the world stage might finally be catching up with the tiny Gulf state that has a native population of just 250,000. The more Qatar seeks the limelight, the more scrutiny it attracts, and a growing number of informed observers around the world appear to increasingly believe that Qatar's two-faced foreign policy posture is being exposed.

“There are simply too many links, this network is too great, for us to pretend these are isolated instances of misguided individuals operating independently of government policy; or that this is merely part of talking to all sides in an argument,” Martin Samuel of Britain’s Daily Mail noted earlier this year. “Qatar has systematic and long-standing associations with some extremely dangerous people and information to support these allegations are established and in the public domain.”