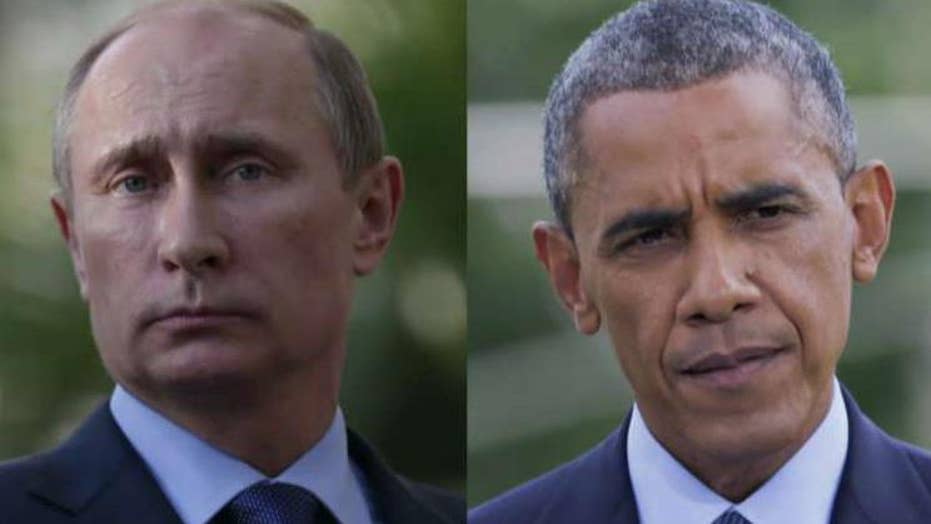 In a sharp departure from Russia's previous strategy of responding to U.S. sanctions in kind, President Vladimir Putin said Friday he would not kick out American diplomats -- one day after President Barack Obama moved to expel 35 Russian intelligence operatives.

TRUMP RESPONDS TO SANCTIONS AGAINST RUSSIA, SAYS IT'S TIME TO 'MOVE ON'

Putin said he was already looking ahead to the incoming Trump administration -- but he vowed that Moscow would stand firm. "Although we have the right to retaliate, we will not resort to irresponsible 'kitchen' diplomacy but will plan our further steps to restore Russian-U.S. relations based on the policies of the Trump administration," he said in a statement.

The Russian president described the White House actions as "unfriendly," but suggested he would take the high road. "We will not expel anyone. We will not prevent their families and children from using their traditional leisure sites during the New Year's holidays. Moreover, I invite all children of U.S. diplomats accredited in Russia to the New Year and Christmas children's parties in the Kremlin."

OPINION: OUTRAGED OBAMA WILL NEED TO DO MORE TO WORRY OUR CYBER ENEMIES

Russia's embassy to the U.S. tweeted that it would send a special airliner to pick up the operatives.

For 🇷🇺diplomats and their families to leave the US, an aircraft of the Rossiya Special Flight Squadron will be sent to the US pic.twitter.com/XJVixx1Am0

Earlier Friday, Putin's top deputies pushed for a much stronger response. Foreign Minister Sergey Lavrov called for Russia to kick out a group of U.S. diplomats, and suggested blocking the Americans from using their summer retreat on the outskirts of Moscow and a warehouse south of Moscow. Prime Minister Dmitry Medvedev charged earlier in the day that the outgoing administration has become immersed in "anti-Russian death throes."

The sanctions that President Obama announced Thursday marked the strongest action his administration has taken to date to retaliate for a cyberattack -- this one linked to the U.S. election.

"All Americans should be alarmed by Russia's actions," Obama said, adding, "Such activities have consequences."

But President-elect Donald Trump said it was "time for our country to move on to bigger and better things."

Still, in the face of newly public evidence, Trump suggested he was keeping an open mind. "In the interest of our country and its great people, I will meet with leaders of the intelligence community next week in order to be updated on the facts of this situation," he said.

In a bid to expose Moscow's cyber aggression, the U.S. released a detailed report about Russia's hacking infrastructure. It said the report was designed to help computer specialists identify compromised systems and prevent more hacking. And Obama said more action was coming.

"These actions are not the sum total of our response to Russia's aggressive activities," the president said in a statement released while he was vacationing in Hawaii. The U.S. has previously left open the possibility it could mount a covert retaliatory strike.

Fox News' Mike Maltas and The Associated Press contributed to this report.