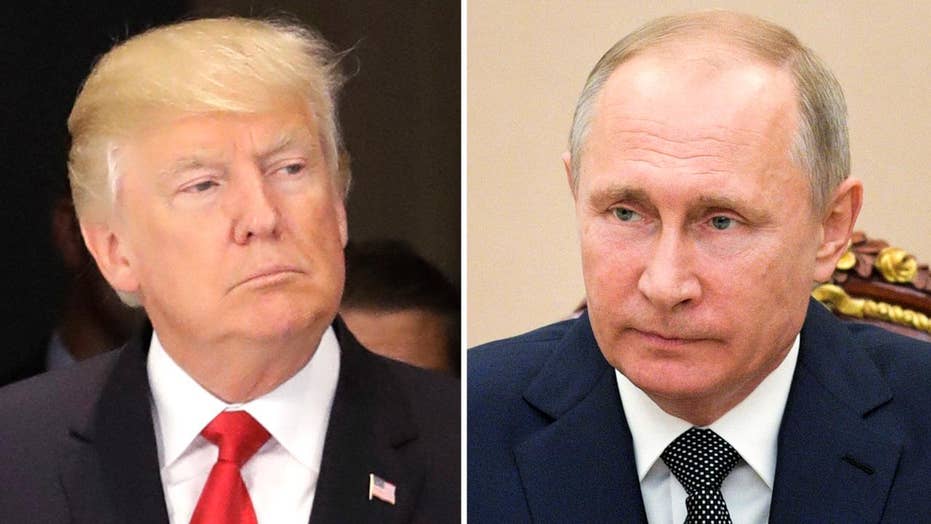 MOSCOW – For Russian President Vladimir Putin, a meeting with U.S. counterpart Donald Trump on the sidelines of the Group of 20 summit in Germany offers a long-sought opportunity to negotiate a rapprochement with Washington. But controversy over the Trump campaign's ties with Russia will loom over the talks, making any agreements unlikely.

Rarely in recent history has a meeting of two heads of state generated so much excitement, anxiety and hope.

The Kremlin views Friday's encounter as a watershed moment that could ease Russia-West tensions. Some in the U.S., meanwhile, worry that Trump could make unjustified concessions to Russia.

Amid investigations into possible collusion with Moscow by Trump's campaign, any deal with Putin would expose Trump to more criticism. And if the two fail to get along, that would further exacerbate tensions between Moscow and Washington and put them on a collision course in regions around the world.

"If Putin comes to the conclusion that even if Russia and the U.S. reach agreement, Trump would be unable to implement it for domestic policy reasons, he would lose interest in seeking an agreement," said Dmitri Trenin, the director of the Carnegie Moscow Center.

Putin, a KGB veteran who once described himself as an "expert in personal communications," always focuses closely on trying to establish warm ties with his counterparts. Kremlin-watchers say Putin meticulously prepares for meetings with foreign leaders, studying their track records and personal habits.

"He believes that personalities — not states, armies or companies — determine the course of global events," Trenin said.

Fyodor Lukyanov, the head of the Council for Foreign and Defense Policies, said even if Putin and Trump develop a good rapport, Trump's ability to deliver on his promises will be a key factor for the Russian leader.

"If Putin has a positive view, as a minimum he will give (Trump) more time to sort things out," he said. "But he could possibly conclude that he (Trump) may not succeed in sorting things out and, moreover, doesn't really want an honest deal. If Putin decides it's not going to work, he will drop all constraints."

The tense environment for the Trump-Putin meeting contrasts with the Kremlin's early expectations.

The Kremlin was very pleased with Trump's presidential victory, since he promised to improve ties with Russia and praised Putin during the campaign. It had hoped for a quick meeting after Trump's inauguration in January, but U.S. congressional and FBI investigations into links between Trump campaign aides and Russia blocked an early encounter.

In the last few months, Moscow's hopes that Trump could act to lift the sanctions imposed on Russia over the Ukrainian crisis have withered. Putin and his lieutenants have also become increasingly impatient about U.S.-Russia ties remaining at a freezing point.

"We realize that the situation is difficult and relations with Russia have become hostage to the U.S. political infighting, but so what?" Putin foreign affairs adviser Yuri Ushakov said this week. "We have difficulties of our own."

Russia and the U.S. have struggled to even set a specific time for Friday's meeting and the White House says there's "no specific agenda" for it. When the two presidents finally sit down for a talk, sharp differences remain on a wide range of issues, from Syria and the Ukrainian crisis to nuclear arms control.

While Trump has said the U.S. and Russia could pool efforts to fight the Islamic State group in Syria, Moscow's firm support for Syrian President Bashar Assad makes any agreement unlikely.

Moscow responded angrily when Trump ordered a missile strike on a Syrian base in April after a chemical attack blamed on Assad's forces, and was also vexed by the U.S. downing of a Syrian warplane in June. After last month's incident, the Russian military suspended a hotline with the U.S. to prevent mid-air incidents and warned that it would track U.S.-led coalition aircraft as potential targets over Syria.

And when the White House warned last week that Assad was preparing for another chemical attack and would "pay a heavy price" if he launches it, Russia responded by offering the Syrian ruler a tour of its air base.

Even though the Russian and U.S. militaries in Syria have worked out a way to avoid collisions, the situation could grow more unstable if Putin and Trump fail to get along, Trenin warned.

Bitter differences over Ukraine haven't been resolved. Some U.S. lawmakers have been pushing the White House to approve the delivery of weapons to the Ukrainian military in response to Moscow's support for separatists in eastern Ukraine — a move that would cross a red line for the Kremlin.

Also clouding Friday's meeting are Washington's concerns about Russian violations of a landmark Cold-War era nuclear arms deal. Moscow has rejected those claims and instead accused the U.S. of breaching the pact.

The only issue where observers think a deal could be made is President Barack Obama's decision in December to shut down Russian Embassy compounds in Maryland and on Long Island, New York. The Kremlin emphasized this week that it has shown remarkable restraint by failing to respond tit-for-tat and warned that its patience is running out.

U.S. officials have indicated that Washington expects Moscow to make some trade-offs in exchange for the two properties, but analysts in Moscow say the Kremlin isn't prepared to bargain on this.

"I would be surprised if Vladimir Putin offers any concessions in exchange for restoring what Russia sees as its inalienable rights," Trenin said. "If no agreement is reached, Russia will take retaliatory measures, which could trigger new U.S. moves."