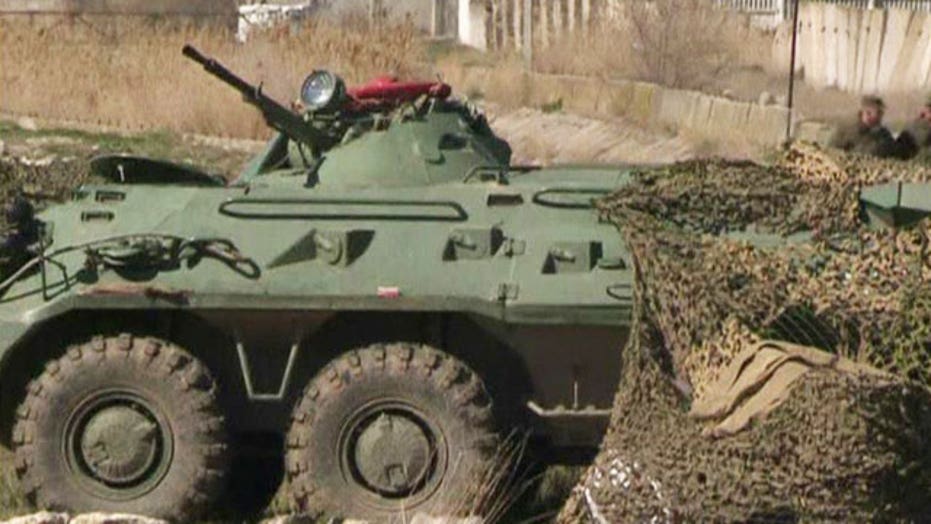 Russian President Vladimir Putin ordered troops deployed near Ukraine to return to their home bases Monday, but NATO says it sees no evidence of a pullback, as violence persisted in the eastern part of the country.

The Kremlin said in a statement that Putin had ordered Defense Minister Sergei Shoigu to withdraw forces involved in "planned spring drills" in Rostov, Belgorod and Bryansk provinces, to their “places of permanent deployment.”

The three regions border Ukraine and the move would signal Moscow may be ready to de-escalate the worst crisis in its relations with the West since the Cold War. Russian troops’ presence on the border increased tensions after Russia's annexation of Crimea in March and raised fears among some Ukrainians and Westerners that Russia could invade to support pro-Moscow separatists.

The Kremlin statement neither addressed how many troops would be pulled out from the three regions nor did it specify a time element for the withdrawal. The troop movement would be easily verifiable by Western intelligence, but so far the U.S. and NATO say they have seen no sign of a pullout.

On Monday, NATO Secretary General Anders Fogh Rasmussen reiterated that the military alliance has "not seen any evidence at all that the Russians have started withdrawal of troops from the Ukrainian border."

"I strongly regret that because a withdrawal of Russian troops would be a first important contribution to de-escalating the crisis," Rasmussen added, according to a BBC report.

White House spokesman Jay Carney echoed the NATO comments about a Russian pullback in Ukraine, a move Russia has offered but not followed through on before.

"We've been clear about our call for the Russian military to deescalate the tension there. So such a withdrawal would be welcome. At this point we've seen no indication of any movement which has been the case, as you note, several times before," Carney told reporters Monday.

NATO has said about 40,000 Russian troops have been deployed near the border with Ukraine, and Putin has reserved the right to send forces in to protect Russian-speakers if necessary, Reuters reported.

Putin said on May 7 that forces had been withdrawn from the frontier, but NATO and the U.S. said there were no signs of reductions.

Rasmussen said the U.S.-led alliance remains open to speaking to Moscow and has proposed meeting with Russian representatives in the NATO-Russia Council next week.

"We're open to a political dialogue," Rasmussen said. But Moscow has not yet replied, he said.

Monday’s statement suggests an attempt to ease tensions with the West and avoid another round of crippling sanctions. The U.S. and the European Union have slapped travel bans and asset freezes on members of Putin's entourage over Russia's annexation of Crimea. They threatened to target entire sectors of the Russian economy with sanctions if Russia tries to derail Ukraine's presidential vote set for Sunday.

Ukraine's Foreign Ministry said it was checking the information about the troops' withdrawal and urged Moscow to also cancel an air force exercise, set to take place in southwestern Russia between Wednesday and Sunday. It said the exercise -- which would involve more than 70 combat aircraft, including Tu-22M long-range bombers -- would fuel tensions during the vote.

Pro-Russian rebels, who have seized government buildings in eastern Ukraine and fought government troops, have declared two sprawling provinces independent and vowed to block Sunday's vote. Ukraine and the West have accused Russia of fueling the mutiny – which Russia has denied. Violence between the two sides has left dozens of people dead in recent weeks, but the rebels have not taken part in EU-brokered talks to defuse the crisis.

Facing Western pressure, Putin supported a peace plan for settling the crisis, which was brokered by the Swiss chairmanship of the Organization for Security and Cooperation in Europe.

The OSCE road map aims to halt the violence and de-escalate tensions ahead of the vote, by offering an amnesty for those involved in the unrest and urging talks on decentralization and the status of the Russian language. The OSCE also has sent an observer mission for the election.

The first roundtables under the plan were held in Ukraine last week, but the government refused to invite representatives of rebels in the east, whom it dubbed "separatists" and "terrorists."

Even though the Russian Foreign Ministry has criticized the roundtables for failing to include the government's foes, Putin welcomed them as an attempt to establish dialogue.

Foreign Minister Sergey Lavrov on Monday also sounded warmer regarding the discussions, calling them a "step in the right direction."

Putin and Lavrov urged the Ukrainian authorities to immediately end a military operation in eastern Ukraine, where fighting continued Monday. Pro-Russian insurgents fired on a Ukrainian Army check-point near a television tower outside the eastern city of Slovyansk, killing one soldier and wounding three, Ukraine's defense ministry said.

AP journalists witnessed mortar fire hitting the village of Andriyivka, just outside Slovyansk. While it was impossible to confirm who fired the mortars, the shelling appeared to come from the Ukrainian government troops' positions, damaging a gas main running across a field and onto local residents' lands. The pipeline caught fire, but no residents were hurt.

Meanwhile, the latest polls show pro-Western billionaire Petro Poroshenko to be the favorite in Sunday’s presidential election in Ukraine. Poroshenko has deep business interests in Russia, and could make a clear negotiating partner, which may affect steps toward stability in the region, The New York Times reported.

Poroshenko has recently struck a conciliatory tone, promising to repair Ukraine-Russian relations at a news conference Sunday. The confection magnate known as “the Chocolate King” said he opposed holding a referendum on Ukrainian membership in NATO and promised to provide security and jobs if elected.

On a recent campaign stop, Poroshenko focused on stability in Ukraine. “A new way of life means that the priority of any government, any authority should be to create new jobs. Our first goal is to guarantee security to all who live in Ukraine, to lead us out of the state of military tension,” he said.