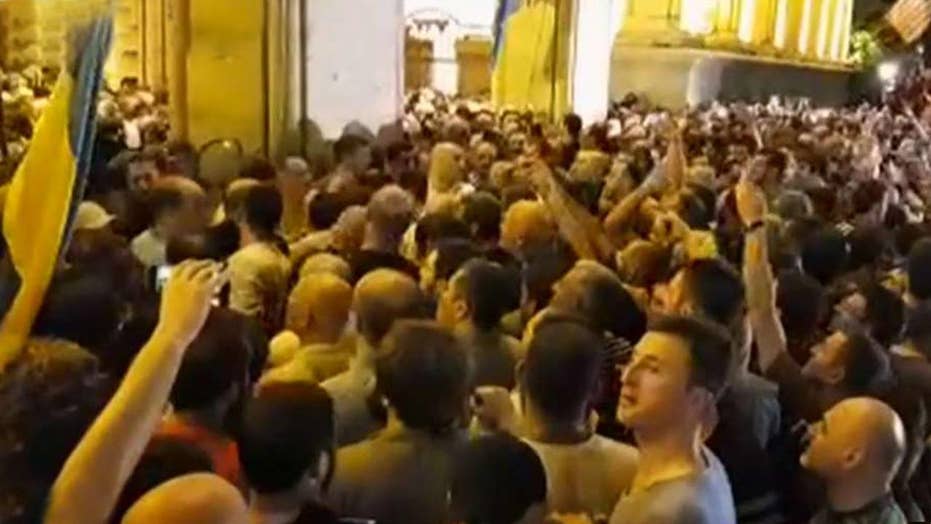 Thousands rally against the visit of a Russian lawmaker.

A visit by a Russian lawmaker to the Georgian capital of Tbilisi prompted thousands of protesters to try to storm Parliament on Thursday.

Sergei Gavrilov, a member of Russia's Duma, was addressing delegates inside the building as part of an assembly of legislators from Orthodox Christian countries. His appearance sparked massive protests from Georgians who resent Russia and see it as an occupying force.

Police held back protesters trying to enter the building and pushed back another surge two hours later.

In this image from video, thousands of protesters gather outside the Parliament in Tbilisi on Thursday.  (AP Photo)

Hatred of Russia among Georgians has become common since both countries fought a war in 2008.

Georgia lost the territories of Abkhazia on the eastern coast of the Black Sea and South Ossetia, and resentment has grown. Gavrilov supports independence for the regions and is a supporter of Russian President Vladimir Putin, who is despised by many Georgians.

During Thursday's chaos, members of the country's opposition parties marched into the assembly and took over the speaker's podium.

“Where is Gavrilov? Where is the occupier? Show him to me,” said Elene Khoshtaria, a member of the European Georgia Party who was draped in the Georgian national flag, according to Eurasianet.

Opposition demonstrators gather in front of Georgian Parliament to call for the resignation of the speaker on Thursday. (AP Photo/Shakh Aivazov)

“Today we, the members of Parliament, will defend the parliamentary hall from the Russian occupiers,” said Salome Samadashvili, member of the United National Movement, as she stood next to Khoshtaria.

Irma Nadirashvili, also of the of United National Movement, added, "This meeting will not continue until the Russian delegation leaves this chamber."

The two nations broke off diplomatic relations following their military conflict, but steps have been taken to normalize relations. Animosity toward Russia is still popular in Georgia, and any visit by the Russians often prompts resentment.