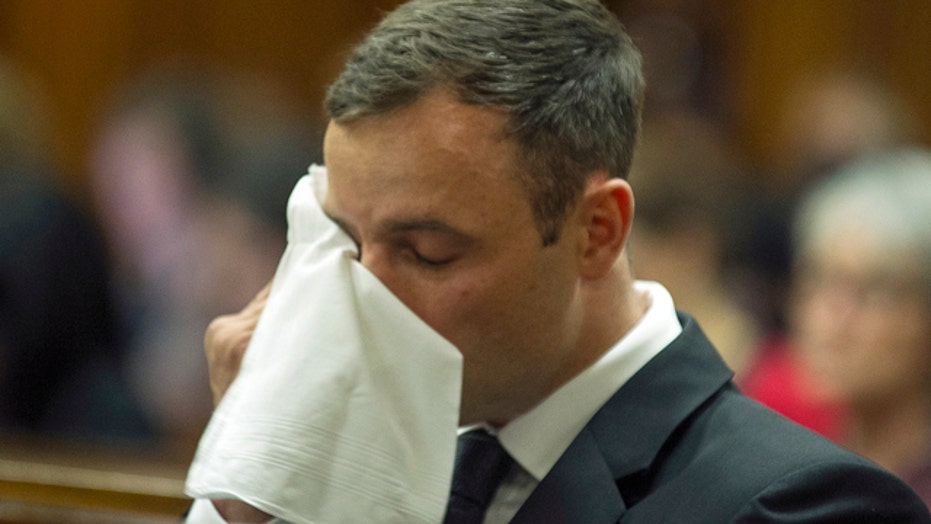 PRETORIA, South Africa – The devastating hollow-point bullets fired by Oscar Pistorius from his powerful handgun "ripped" through Reeva Steenkamp's body, the chief prosecutor said Friday at the end of the athlete's sentencing hearing, urging a judge to send him to prison for at least 10 years.

"When I think about that, it must have been horrific," prosecutor Gerrie Nel said.

Judge Thokozile Masipa is expected to announce Pistorius' sentence on Tuesday after she found him guilty last month of culpable homicide for negligently killing Steenkamp, but acquitted him of murder.

Nel and chief defense lawyer Barry Roux presented their final arguments for sentencing on Friday, summing up the testimony in the weeklong hearing.

Nel said to Judge Masipa: "the minimum term that society will be happy with is 10 years in prison."

It was the first time prosecutors have said what sentence they are seeking for the double-amputee Olympic runner for shooting his girlfriend.

Culpable homicide is comparable to manslaughter and Masipa has a wide range of options on Pistorius' sentence. She could issue a suspended jail sentence and a fine, order the 27-year-old Paralympic champion to go under house arrest, or send him to prison for up to 15 years.

Nel said Pistorius should never be allowed to own a firearm again after he was also convicted on another charge of unlawfully firing a gun in a public place in a restaurant incident in early 2013, weeks before Steenkamp's killing.

Pistorius' lawyers have argued for a three-year sentence of occasional house arrest and community service and no jail time, saying Pistorius has suffered emotionally and financially already, and would be under duress in prison because of his disability as a double amputee.

Nel called a house arrest sentence "shockingly disproportionate" to what Pistorius did in the pre-dawn hours of Valentine's Day last year when he shot four times with his 9 mm pistol through a toilet cubicle door in his home, hitting Steenkamp in the head, arm and hip.

"The deceased died in a small cubicle behind a closed door," Nel said. "Three bullets ripped through her body."

Later, Nel said "this is a serious matter. The negligence borders on intent."

Pistorius' chief defense lawyer Roux said the world-famous athlete did not act with any "deviousness" when he killed Steenkamp, and acted while feeling extremely vulnerable and anxious. Pistorius testified he mistook Steenkamp for a dangerous intruder in his home and claimed the shooting was a tragic accident.

"The accused's actions were to some extent dominated by vulnerability and anxiety," Roux said to the red-robed judge who will decide Pistorius' fate. "When you come to sentence ... you have to look at the actions with his frame of mind."

Roux said there was also "no conscious unlawfulness" from Pistorius. He described Pistorius' suffering, both emotional and financial, since the Feb. 14, 2013 shooting.

"He's lost everything," Roux said of Pistorius, once an inspirational figure who became the first amputee to run at the Olympics in 2012. "He was an icon in the eyes of South Africans."

Pistorius at one point cried as he sat, his head bowed, on a wooden bench behind his lawyer.

"He's not only broke, but he's broken. There is nothing left of this man," Roux said. He said that Pistorius "hasn't even the money to pay for legal expenses. He has nothing left."