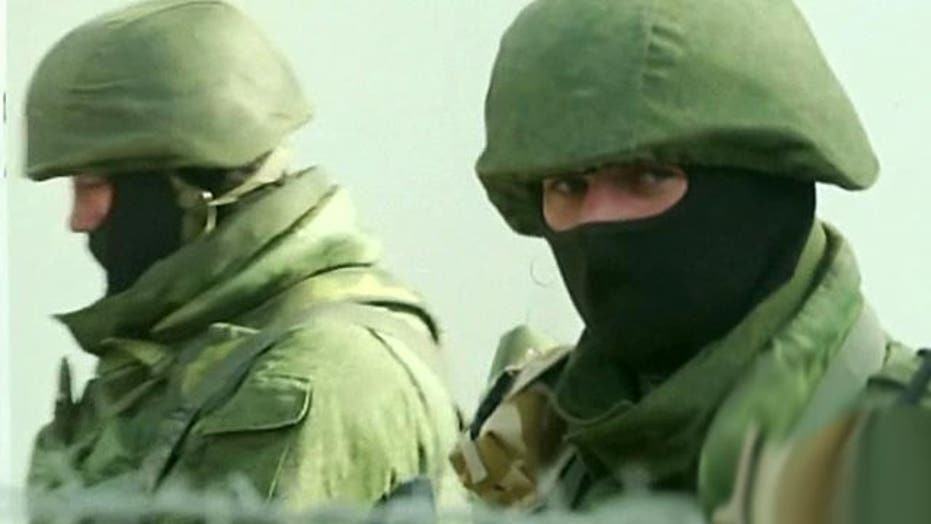 Next phase of Russia's 'takeover' of Crimea

Pro-Russian crowds seized two Ukrainian warships Thursday and Ukraine said its troops were being threatened in Crimea as it prepared to pull its troops and their families from the region.

Shots were fired but there were no casualties as the Ukrainian corvette Khmelnitsky was seized in Sevastopol, according to an AP photographer at the scene. Another ship, the Lutsk, was also surrounded by pro-Russian forces.

National Security and Defense Council secretary Andriy Parubiy said that Ukraine will seek U.N. support to turn Crimea into a demilitarized zone as it prepares to relocate as many as 25,000 soldiers and their families to the Ukrainian mainland.

Thousands of Ukrainian soldiers and sailors are trapped on military bases, surrounded by heavily armed Russian forces and pro-Russia militia.

"We are working out a plan of action so that we can transfer not just servicemen, but, first of all, members of their family who are in Crimea, quickly and effectively to mainland Ukraine," Parubiy said.

Russia's State Duma lower house of parliament on Thursday overwhelmingly approved the treaty to annex Crimea from Ukraine, Reuters reported.  The Federation Council upper house will hold a vote on Friday, completing ratification of the treaty that was signed
by Russian President Vladimir Putin on Tuesday.

Humbled but defiant, Ukraine lashed out symbolically at Russia by declaring its intent to leave the Moscow-dominated Commonwealth of Independent States, a loose alliance of 11 former Soviet nations. The last nation to leave the group was Georgia, which fought a brief war with neighboring Russia in 2008 and ended up losing two separatist territories.

Ukraine has been powerless to prevent Russian troops from taking control of Crimea. Crimea's absorption came after a hastily organized referendum in which the population voted in favor of seceding from Ukraine and joining Russia.

President Barack Obama said Thursday the U.S. is levying a new round of economic sanctions on individuals in Russia, both inside and outside the government, in retaliation for the Kremlin's actions in Ukraine.

Obama says he has also signed a new executive order that would allow the U.S. to sanction key sectors of the Russian economy.

The new penalties mark the second round of economic sanctions the U.S. has levied on Russia this week.

Minutes after Obama introduced the new sanctions, Russia said it has imposed entry bans on nine U.S. lawmakers and officials in retaliation.

The list includes John Boehner, the speaker of the House of Representatives, Robert Menendez, the head of the Senate Foreign Affairs Committee, other senators and administration officials.

European Union leaders said Thursday they would widen the number of people hit with a travel ban and frozen assets in response to Russia's annexation of the Crimea peninsula, and announced plans to scrap a scheduled EU-Russia summit.

French President Francois Hollande said "there was supposed to be a summit between EU and Russia that cannot happen in these circumstances."

Chancellor Angela Merkel told the German parliament that EU leaders would increase the number of people affected by asset freezes and travel bans -- initially at 21 politicians and military commanders -- and reiterated that if the situation worsens, the EU is prepared to move to another level, which would include economic sanctions.

British Prime Minster David Cameron said that the two-day summit was to center just as much on strengthening Ukraine's fledgling government, calling on the 28 EU nations' need to bolster the new Ukrainian authorities with political commitments and economic aid.

The EU is Russia's biggest trading partner, and Russia is the EU's third-largest partner, mostly thanks to exports of raw materials such as oil and gas. Because of the multi-billion trade exchanges, any step toward economic sanctions will not be taken lightly.

EU nations had already canceled the preparation of a G-8 summit set for June in Sochi and, as a second phase, on Monday imposed the first round of visa bans and asset freezes on 21 people linked to the widely condemned annexation.

Hollande's announcement to scrap a bilateral summit was a natural extension.

"I hope by then, we'll have de-escalated" with Moscow, he said.

At the same time, the EU leaders planned to give the new government in Kiev all the support it could.

Yatsenyuk arrived in Brussels to sign a political agreement Friday with EU leaders, underscoring the commitment of Europe to the new leadership in Kiev.

UN Secretary-General Ban Ki-moon visited Moscow on Thursday and will go to Ukraine on Friday.

Ban said at a meeting with Putin Thursday that he was "deeply concerned'" by the situation involving Ukraine and Russia, Reuters reported.