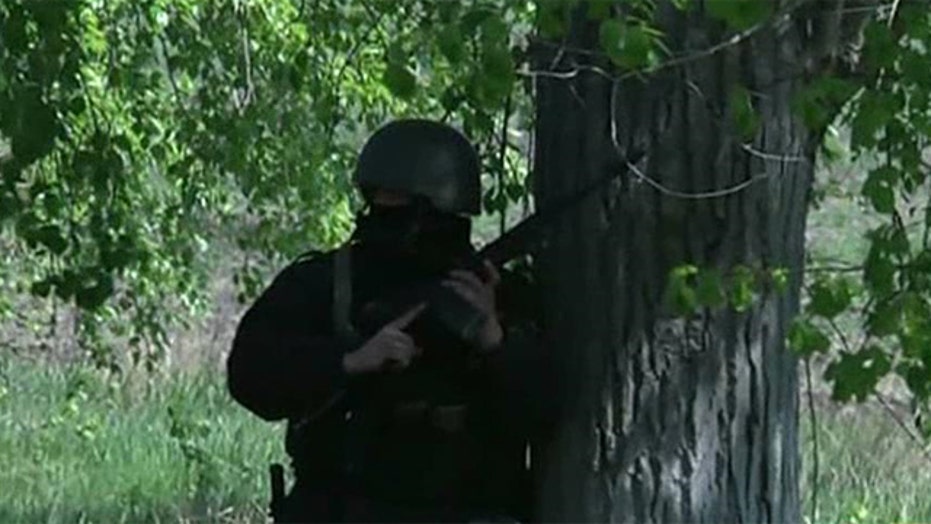 Outside Slovyansk, a city some 90 miles west of Russia, Ukraine government forces continued operations to form a security cordon as it attempts to quell unrest threatening to derail planned elections on May 25.

Vyacheslav Ponomarev, self-proclaimed people's mayor of Slovyansk, described the detained observers as "captives" and said that they were officers from NATO member states.

"As we found maps on them containing information about the location of our checkpoints, we get the impression that they are officers carrying out a certain spying mission," Ponomarev said.

Ukraine's state security service said the observeRs were being held in "inhuman conditions in the basement of the terrorists' headquarters," according to Reuters, further indicating that one needed medical attention.

The German-led, eight-member team was traveling under the auspices of the Organization of Security and Cooperation in Europe when they were detained. Germany's Defense Ministry said it had had lost contact with the team, which it said included five Ukrainians.

Tim Guldimann, the OSCE's special envoy for Ukraine, told German public radio WDR on Saturday that "efforts are being made to solve this issue." He declined to elaborate.

A German government source reportedly told Reuters "a negotiating team from the OSCE is on the way to the region," but would not specify exactly where the team was headed.

In a statement released on Saturday, Russia's Foreign Ministry said it was taking "all measures to resolve the situation," but blamed the authorities in Kiev for failing to secure the safety of the team.

"The security of the inspectors is wholly entrusted to the host party," the statement said. "Hence it would be logical to expect the current authorities in Kiev to resolve preliminary questions of the location, actions, and safety of the instructors."

Kiev blamed a Russian special forces operative for the kidnapping and said the detainees are being used as a "human shield," Reuters reported.

"We are urgently checking their activities, where they were and what they are doing," Yevgeny Gorbik, a separatist, told Reuters of the detainees, later adding that "it's not up to me to decide," what will happen to the team members.

The United States and other nations in the Group of Seven said in a joint statement released Friday night by the White House that they plan to impose additional economic sanctions on Russia in response to its actions in Ukraine.

The West has accused Russia of using covert forces to encourage unrest in Ukraine and says Moscow has done nothing to pressure pro-Russian militias to free police stations and government buildings in at least 10 cities across the region.

"Instead, it has continued to escalate tensions by increasingly concerning rhetoric and ongoing threatening military maneuvers on Ukraine's border," G-7 leaders said in a statement.

"We have now agreed that we will move swiftly to impose additional sanctions on Russia."

Condemning Russia's earlier annexation of the Ukrainian Black Sea region of Crimea, the G-7 said: "We will now follow through on the full legal and practical consequences of this illegal annexation, including but not limited to the economic, trade and financial areas."

An EU source said ambassadors from 28 European Union member states would meet Monday in Brussels to agree on a "list of 'Stage 2' sanctions" to add to the list of Russian officials and pro-Russian leaders in Ukraine who have already been sanctioned with EU asset freezes and travel bans.

Ukraine's acting prime minister, Arseniy Yatsenyuk, traveled to Rome on Saturday to meet with Pope Francis and Italian Premier Matteo Renzi. Francis gave Yastenyuk a fountain pen, telling him, "I hope that you write 'peace' with this pen."

Yastenyuk replied: "I hope so, too."

Yatsenyuk went on to the basilica in Rome popular with Ukrainian Catholics. He lit a candle and held a moment of silence for those killed in Ukraine's unrest.

In a briefing with reporters, he lashed out at Moscow, saying Russian military aircraft violated Ukrainian air space late on Friday.

"The only reason is to provoke Ukraine to strike a missile and to accuse Ukraine of waging a war to Russia," he said, and asked Russia "not to provoke and not to support Russian-led terrorists... in eastern and southern Ukraine. We ask Russia to leave us alone."

The Russian Ministry of Defense denied claims, first raised by the U.S. on Friday, that its aircraft had crossed the border with Ukraine, a spokesman told state news agencies on Saturday.

On one road leading west of the nearby town of Sviatohirsk, more than two dozen troops in black fatigues unloaded from the vehicles and stopped drives in the passing traffic, frisking passengers and inspecting vehicles for weapons.

Ukraine's acting president this week ordered security forces to resume operations in the country's east after the bodies of two people allegedly abducted by pro-Russia insurgents were found and a military aircraft was reported to have been hit by gunfire.

That came despite an international agreement calling for all sides in Ukraine to refrain from violence and for demonstrators to vacate public buildings. It did not specifically prohibit security operations, but Ukraine suspended an earlier so-called "anti-terrorist operation" after the accord.

Washington deployed 150 paratroopers to Lithuania on Saturday. A total of 600 U.S. troops have now arrived in Poland and the former Soviet Baltic states.

"As threats emerged, we see who our real friends are,'' Lithuanian President Dalia Grybauskaite said as she greeted the troops at the Siauliai air base.

Lithuanian President Dalia Grybauskaite said the presence of U.S. troops would "repel those who encroach on stability in Europe and peace in the region."