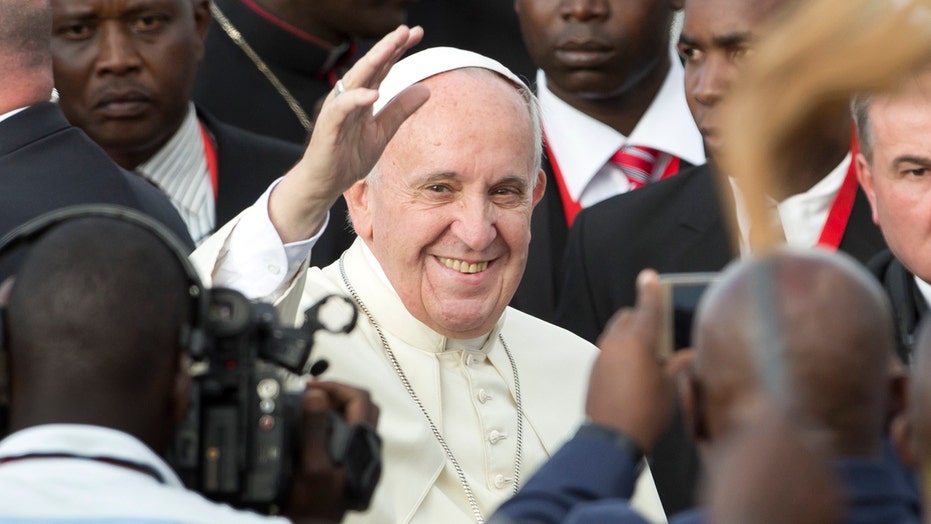 Security beefed up as Pope Francis arrives in Kenya

Brushing aside security concerns, Pope Francis arrived in Kenya on Wednesday on his first-ever trip to Africa and urged Kenyans to work for peace and forgiveness amid a wave of extremist violence on the continent that threatens to disrupt his trip.

Francis was received upon arrival at Nairobi's airport by President Uhuru Kenyatta and a throng of traditional dancers and singers at the start of a six-day pilgrimage that will also take him to Uganda and the Central African Republic, a country wracked by fighting between Christians and Muslims.

Asked en route if he was concerned about his own safety, Francis responded with his typical wry humor: "I'm more worried about the mosquitoes."

But he sounded a far more serious note in his speech to Kenyatta and the country's diplomatic corps at Nairobi's State House, urging all Kenyans to work for peace and forgiveness to heal ethnic, religious and economic divisions.

"Experience shows that violence, conflict and terrorism feed on fear, mistrust and the despair born of poverty and frustration," he told the audience, which applauded him warmly. "Ultimately, the struggle against these enemies of peace must be carried on by men and women who fearlessly believe in, and bear honest witness to, the great spiritual and political values which inspired the birth of the nation."

Francis didn't refer explicitly to the April 2 attack by Islamic extremists that left 150 people dead at a mostly Christian university in Garissa. But he is likely to insist on the need for interfaith dialogue Thursday when he meets with Christian and Muslim leaders, and later with young Kenyans struggling to live their faith amid the menace of the Somalia-based al-Shabab extremist group responsible for the Garissa attack.

Kenyatta didn't refer to al-Shabab either, but spoke generally about the threat posed by Islamic extremists, who on Wednesday struck Tunisia after attacks in recent days in Mali and Paris.

"As we fight this war, recent events around the world have indeed taught us that we must do even more to bring unity and understanding between faiths, between ethnicities, between races but also between nations," he said.

Francis is aiming to bring a message of peace and reconciliation to Africa, but is also stressing some issues close to his heart including the need to fight poverty, protect the environment and encourage good governance. Thousands of people lined his motorcade route, snapping photos as he whizzed by with their cell phones.

Francis urged Kenya's political, social and economic leaders to work with "integrity and transparency" for the common good, a clear reference to Kenya's poor record with corruption. Transparency International ranked Kenya a lowly 145 out of 174 countries in its 2014 corruption perception index, and Kenyatta this week described corruption as a national security threat to East Africa's largest economy.

"I ask you in particular to show genuine concern for the needs of the poor, the aspirations of the young, and a just distribution of the natural and human resources with which the Creator has blessed your country," Francis said.

Kenyatta, for his part, said corruption was the major challenge facing the country. His rule has come under criticism for a lack of high-level prosecutions of officials accused of corruption.

On the eve of Francis' arrival, he replaced six ministers who vacated office after they were accused of corruption.

"Kenya's future depends on upholding the highest standards of integrity in governance, in inclusivity and in the protection of peace," Kenyatta said.

After visiting Nairobi's Kangemi slum Friday, Francis heads to Uganda where he'll pray at the shrine to the country's famous martyrs and celebrate a Mass.

Some uncomfortable issues may arise: The church's opposition to condoms as a way to fight AIDS, and its support of local legislation criminalizing homosexuality are chief among them.

But on the whole, the pope's visit to Africa is meant to tell the African church that it matters, said the Rev. Robert Dowd, professor of political science at the University of Notre Dame. "It has a crucial role to play in promoting justice and peace in societies where governments are not always accountable or responsive."

The Vatican has long looked to Africa as the future of the church, given the proportion of Africans in the world population of Catholics increased from 7 percent to 16 percent between 1980 and 2012, according to a report this year by the Center for Applied Research in the Apostolate, a research center affiliated with Georgetown University in the United States.

Francis, though, may also issue some tough love words to local clergy, who tend to let missionaries get their hands dirty working with society's outcasts while diocesan priests and bishops live somewhat removed from the hardships of daily life. The Vatican has also long fought to keep its African clergy celibate.

The pope is due to arrive Sunday in Bangui, Central African Republic, for the most delicate part of the trip. The country has been highly volatile since early 2013, when Muslim rebels overthrew the president of a decade. Unprecedented sectarian violence followed and has continued to flare despite the presence of more than 11,000 peacekeepers and police.