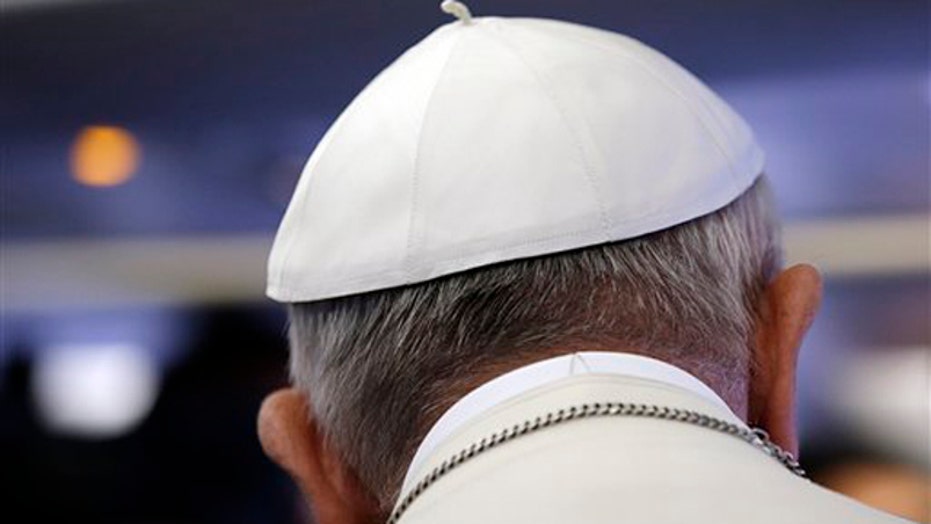 Pope Francis will travel to the city of Guayaquil on Ecuador's coast Monday to celebrate Mass, as South America's first pontiff visits his home continent with a message of compassion for the weak and respect for the planet.

He will then hold a lunch with a group of fellow Jesuits.

The highlight of the encounter will likely be his reunion with the Rev. Francisco Cortes, a Jesuit affectionately known as "Padre Paquito," to whom the Argentina-born pope, then the Rev. Jorge Mario Bergoglio, entrusted his seminarians on study trips to Ecuador years ago.

In a recent interview with The Associated Press, Cortes couldn't fathom that Bergoglio remembered him, much less made a point of coming to have lunch.

"I don't know what to ask him," the soon-to-be 91-year-old Cortes said. "He said he wanted to see me and I'm amazed that he's coming. For the first time, I have known a pope."

Pope Francis returned to his native home of South America on Sunday to begin his eight-day tour that will take him to some of the continent's most impoverished countries.

Latin America's first pope is bringing a message of solidarity with the poor in Ecuador, Bolivia and Paraguay but will not be making a stop in his native country of Argentina.

Children in traditional dress greeted Pope Francis at Quito's Mariscal Sucre airport in Ecuador, the wind blowing off his skullcap and whipping his white cassock as he descended from the plane following a 13-hour flight from Rome. He personally greeted and kissed several indigenous youths waiting for him on the side of the red carpet.

In a speech in front of President Rafael Correa, he immediately signaled key themes: the need to care for society's most marginal, ensuring socially responsible economic development and, turning to Ecuador specifically, defending "the singular beauty of your country."

"From the peak of Chimborazo to the Pacific coast, from the Amazon rainforest to the Galapagos Islands, may you never lose the ability to thank God for what he has done and is doing for you," he said.

He added that "special attention must be paid to our most fragile brothers and the most vulnerable minorities."

The Pacific nation of 15 million is home to more than 20,000 plant species as well as the Galapagos Islands, which inspired Charles Darwin's theory of evolution in 1535.

Thousands lined the motorcade route that would take Francis to the Vatican ambassador's residence, many hopeful the pope will have a calming effect on a country that has seen recent street protests.

Some people shouted "Out! Out! Out!" at Correa as the papal motorcade traveled from the airport to the capital. Correa has been buffeted for nearly a month by the most serious protests against his left-leaning government of his more than eight years in power.

"We are living difficult moments in our country," she said, "and Francis brings a bit of joy."

Francis is to preside over two big open-air Masses in his three days in Ecuador — one in the steaming Pacific port of Guayaquil on Monday, the other Tuesday in the capital on the site of the city's former airport.

Francis' stops later include a violent Bolivian prison, a flood-prone Paraguayan shantytown and a meeting with grass-roots groups in Bolivia, the sort of people he ministered to in the slums of Buenos Aires as archbishop.

Crowds are expected to be huge. While the countries themselves are small, they are fervently Catholic: 79 percent of the population is Catholic in Ecuador, 77 percent in Bolivia and 89 percent in Paraguay, according to the Pew Research Center.

Beyond the major public Masses in each country, Vatican organizers have scheduled plenty of time for the pope to meander through the throngs expected to line his motorcade route.

In September, Pope Francis is visiting Cuba as well as multiple cities in the United States.