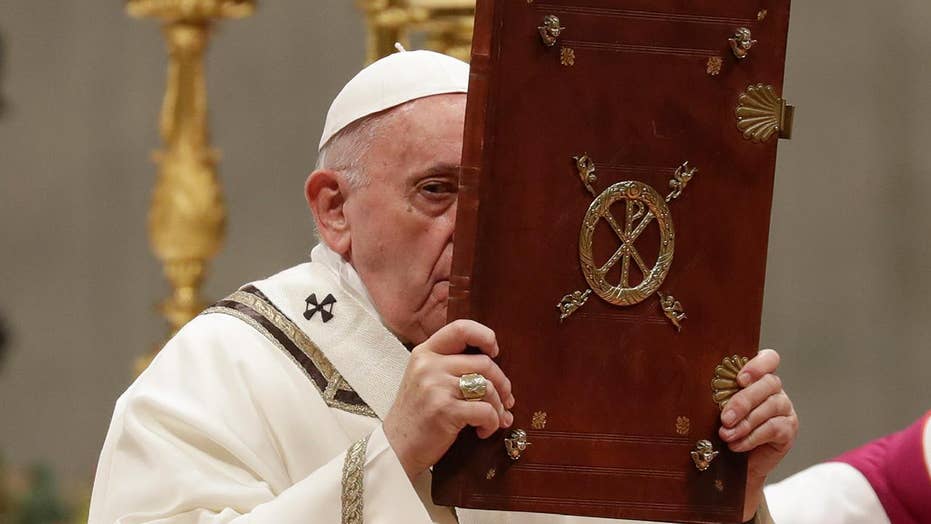 Pope calls on people around the world to remember the good in all humans and to help those trapped amid conflict; Trey Yingst reports.

Pope Francis did not approve the ordination of married men to address the Catholic Church's priest shortage in the Amazon, but instead wrote a climate change-focused "love letter to the Amazonian rain forests and its indigenous peoples," according to the Associated Press.

The Holy See sidestepped the bishops' recommendation to consider ordaining married men and women deacons in the Amazon, where the faithful living in remote communities can go months or years without Mass.

Instead, he urged bishops to pray for more priestly vocations and send missionaries to the region, according to the document called the "Beloved Amazon," released by the Vatican Wednesday.

“This urgent need leads me to urge all bishops, especially those in Latin America, not only to promote prayer for priestly vocations, but also to be more generous in encouraging those who display a missionary vocation to opt for the Amazon region,” Francis wrote, disappointing progressives and offering relief to conservatives who have long accused the pope of heresy.

Francis dismissed suggestions that ordaining women to any ministry would serve them or the church. While agreeing that women should have greater decision-making and governance roles, Francis argued  they must find “other forms of service and charisms that are proper to women.”

After meeting with bishops from the Amazon's nine countries to discuss global warming and ministering to their flock last year, the first Latin American pope dedicated the entire first half of the document to the “injustice and crime” committed against the Amazonian peoples and its environment by local governments and foreign corporate interests, illegal mining and extraction industries.

“We cannot allow globalization to become a new version of colonialism,” he wrote.

The document is his second on global warming since his 2015 environmental encyclical, "Praised Be," in which he blasted wealthy countries and multinational corporations for destroying the world's natural resources and profiting off the extremely poor in the remote communities.

The pope said the Amazonian church should have social justice at the forefront of its spirituality and called on them to incorporate indigenous traditions and cultures into the ministry, including song and dance, myth and festivals, and urged patience when confronted with apparently pagan practices and symbols.

“A missionary of souls will try to discover the legitimate needs and concerns that seek an outlet in at times imperfect, partial or mistaken religious expressions, and will attempt to respond to them with an inculturated spirituality,” he wrote.