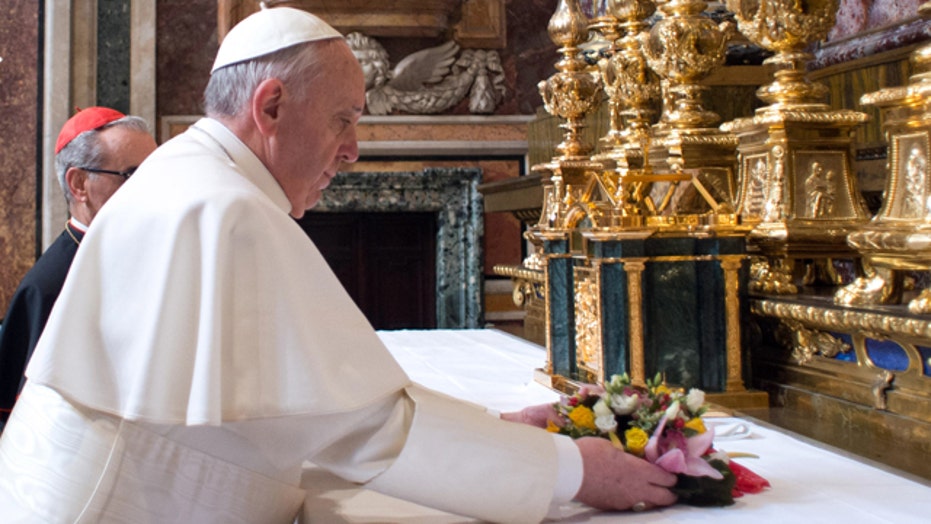 A look at Pope Francis on first full day as pontiff

Former ambassador to the Vatican speaks out

Pope Francis held his first mass as leader of the Catholic Church Thursday, urging cardinals that the church should stick to its roots and avoid modern temptations.

In his first homily at the Sistine Chapel, Jorge Mario Bergoglio, the 76-year-old Argentine cardinal who was elected pope by his peers on Wednesday, warned that the church risked becoming a "pitiful" non-governmental organization unless it goes through spiritual renewal and focuses on the message of Jesus Christ, Sky News reports.

"If we do not confess to Christ what would we be?" Francis said. "We would end up a pitiful NGO. What would happen would be like when children make sand castles and then it all falls down."

Francis and all the cardinals in attendance wore light yellow robes over their cassocks, while the new pope spoke in Italian without notes.

Earlier Thursday, Francis stopped by his hotel to pick up his luggage and pay the bill himself and praying at Rome's main basilica dedicated to the Virgin Mary.

He entered the St. Mary Major basilica through a side entrance just after 8 a.m. and left about 30 minutes later.

"He spoke to us cordially, like a father," Father Ludovico Melo, a priest who prayed with Pope Francis, told Reuters. "We were given 10 minutes' advance notice that the pope was coming."

After becoming the first pontiff from the Americans, Francis had told a crowd of some 100,000 people packed in rain-soaked St. Peter's Square just after his election that he intended to pray Friday to the Madonna "that she may watch over all of Rome."

Bergoglio chose the name Francis, drawing connections to the humble 13th-century saint who saw his calling as trying to rebuild the church in a time of turmoil.

Benedict's longtime aide, Monsignor Georg Gaenswein, accompanied Francis to the visit Thursday morning at St. Mary Major. In addition to being Benedict's secretary, Gaenswein is also the prefect of the papal household and will be arranging the new pope's schedule.

Like many Latin American Catholics, Francis has a particular devotion to the Virgin Mary, and his visit to the basilica was a reflection of that. He prayed before a Byzantine icon of Mary and the infant Jesus, the Protectress of the Roman People.

"He had a great devotion to this icon of Mary and every time he comes from Argentina he visits this basilica," said one of the priests at the basilica, the Rev. Elio Montenero. "We were surprised today because he did not announce his visit."

He then went into the main altar area of the basilica and prayed before relics of the manger in Bethlehem where Jesus is said to have been born — an important pilgrimage spot for Jesuits.

Members of his flock were charmed Thursday when Francis stopped by the Vatican-owned residence where he routinely stays during visits to Rome.

The Rev. Pawel Rytel-Andrianek, who teaches at the nearby Pontifical Holy Cross University and is staying at the residence, said he didn't just come to get his luggage, noting that anyone could have come to get his suitcases.

"He wanted to come here because he wanted to thank the personnel, people who work in this house," he said. Francis met with the staff in the dining room. "He greeted them one by one, no rush, the whole staff, one by one," Rytel-Andrianek said, noting that the pope knew everyone by name.

"People say that he never in these 20 years asked for a (Vatican) car," he said. "Even when he went for the conclave with a priest from his diocese, he just walked out to the main road, he picked up a taxi and went to the conclave. So very simple for a future pope."

Francis has also spoken by phone with Benedict, who became the first pope to resign in 600 years and has been living at the papal retreat in Castel Gandolfo. Francis was expected to visit him this week, but a Vatican spokesman, the Rev. Thomas Rosica, said Francis wouldn't make the trip to Castel Gandolfo on Thursday, and probably wouldn't go Friday, either.

The visit is significant because Benedict's resignation has raised concerns about potential power conflicts emerging from the peculiar situation of having a reigning pope and a retired one.

As the long-time archbishop of Buenos Aires, Francis has spent nearly his entire career at home in Argentina, overseeing churches and shoe-leather priests. In choosing a 76-year-old pope, the cardinals clearly decided that they didn't need a vigorous, young pope who would reign for decades but rather a seasoned, popular and humble pastor who would draw followers to the faith and help rebuild a church stained by scandal.

Chants of "Long live the pope!" arose from the throngs of faithful, many with tears in their eyes. Crowds went wild as the Vatican and Italian military bands marched through the square and up the steps of the basilica, followed by Swiss Guards in silver helmets and full regalia.

Francis appeared on the balcony of St. Peter's Basilica just after a church official announced "Habemus Papum" -- "We have a pope" -- and gave Bergoglio's name in Latin.

"Ladies and Gentlemen, good evening," he said to wild cheers before making a reference to his roots in Latin America, which accounts for about 40 percent of the world's Roman Catholics.

Francis asked for prayers for himself, and for retired Pope Emeritus Benedict XVI, whose resignation paved the way for the conclave that brought the first Jesuit to the papacy.

"You know that the work of the conclave is to give a bishop to Rome," Francis said. "It seems as if my brother cardinals went to find him from the end of the earth. Thank you for the welcome."

Bergoglio has shown a keen political sensibility as well as the kind of self-effacing humility that fellow cardinals value highly, according to his official biographer, Sergio Rubin. He showed that humility on Wednesday, saying that before he blessed the crowd he wanted their prayers for him and bowed his head.

"Good night, and have a good rest," he said before going back into the palace.

In a lifetime of teaching and leading priests in Latin America, which has the largest share of the world's Catholics, Francis has been known for modernizing an Argentine church that had been among the most conservative in Latin America.

Like other Jesuit intellectuals, Bergoglio has focused on social outreach. Catholics are still buzzing over his speech last year accusing fellow church officials of hypocrisy for forgetting that Jesus Christ bathed lepers and ate with prostitutes.

Francis, the son of middle-class Italian immigrants, is known as a humble man who denied himself the luxuries that previous Buenos Aires cardinals enjoyed. Bergoglio often rode the bus to work, cooked his own meals and regularly visited the slums that ring Argentina's capital.

He came close to becoming pope in 2005, reportedly gaining the second-highest vote total in several rounds of voting before he bowed out of the running in the conclave that elected Pope Benedict XVI.

American Cardinal Timothy Dolan gave an inside glimpse into the drama of the conclave in his talk at the American seminary.

When the tally reached the necessary 77 votes to make Bergoglio pope, Dolan said, the cardinals erupted in applause. And when he accepted the momentous responsibility thrust upon him -- ''there wasn't a dry eye in the place," Dolan recounted.

After the princes of the church had congratulated the new pope one by one, other Vatican officials wanted to do the same, but Francis preferred to go outside and greet the throngs of faithful. ''Maybe we should go to the balcony first," Dolan recalled the pope as saying.

Elected on the fifth ballot, Francis was chosen in one of the fastest conclaves in years, remarkable given there was no clear front-runner going into the vote and that the church had been in turmoil following the upheaval unleashed by Benedict's surprise resignation.

In choosing to call himself Francis, the new pope was linking himself with the much-loved Italian saint from Assisi associated with peace, poverty and simplicity. St. Francis was born to a wealthy family but later renounced his wealth and founded the Franciscan order of friars; he wandered about the countryside preaching to the people in very simple language.

He was so famed for his sanctity that he was canonized just two years after his death in 1226.

Francis will be installed officially as pope on Tuesday, on the feast of St. Joseph, patron saint of the universal church, according to Vatican spokesman Lombardi.

Lombardi, also a Jesuit, said he was particularly stunned by the election given that Jesuits typically shun positions of authority in the church, instead offering their work in service to those in power.

But Lombardi said that in accepting the election, Francis must have felt it "a strong call to service," an antidote to all those who speculated that the papacy was about a search for power.

In an interesting twist the Jesuits were expelled from all of the Americas in the mid-18th century. Now, a Latin American Jesuit has been elected head of the 1.2-billion strong Catholic Church.