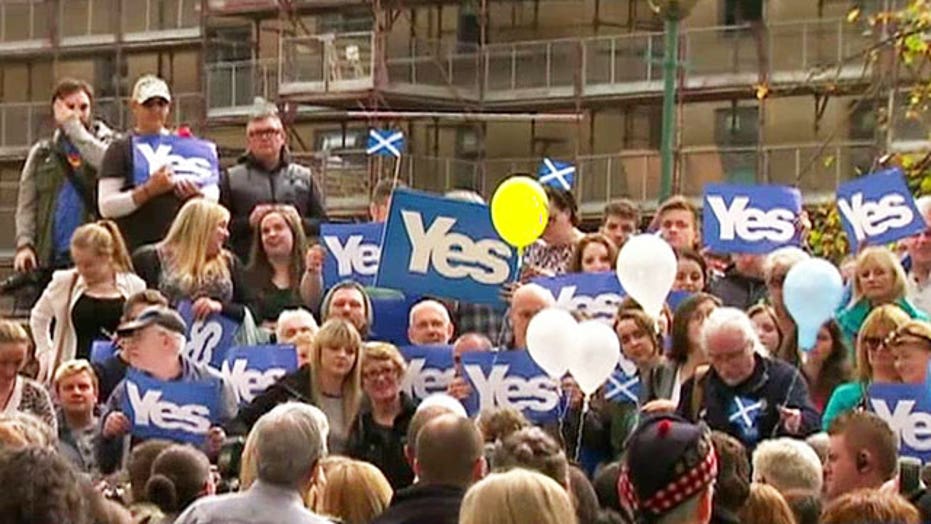 Would a yes vote lead to a domino effect in Europe?

The Better Together campaign in Scotland is retaining a marginal lead, according to a new poll that puts No on 52% and Yes on 48%.

The YouGov poll of 1,300 people on the issue of Scottish independence for The Sun and The Times was taken over Tuesday to Thursday.

It covered a period when the leaders of the three main parties all visited Scotland and former Prime Minister Gordon Brown stepped up his involvement in the drive to keep the union.

Thursday was considered a good day for the No campaign as several independent heavyweights expressed their concerns if Scotland was to vote to become a separate country.

Asda and John Lewis said the increased costs of operating in an independent Scotland would inevitably be passed on to the consumer, leading to higher prices.

RBS, which has been based in Scotland since 1727 and employs 11,500 people there, also confirmed it would be moving its headquarters to London if Scotland voted for independence.

The International Monetary Fund (IMF), meanwhile, said a vote for independence could have a negative effect on the markets in the short-term because of "uncertainty".

The Yes campaign, led by Scotland's First Minister Alex Salmond, had been buoyed at the weekend with one YouGov poll putting it marginally ahead of former Chancellor Alistair Darling's Better Together.

There had been fears that a poor performance by David Cameron, Ed Miliband and Nick Clegg, who all travelled north of the border on Wednesday, could result in Yes gaining further ground.

It was also not known how Mr Brown's intervention, in support of the No campaign, would go down with the electorate.

The former premier spoke to Sky News on Sunday and made a speech on Monday setting out an alternative timetable to give the Scottish Parliament more control over finance, welfare and taxation, in the event of a No vote.

Asda CEO Andy Clarke said on Thursday: "If we were no longer to operate in one state with one market and - broadly - one set of rules, our business model would inevitably become more complex. We would have to reflect our cost to operate here.

"This is not an argument for or against independence, it is simply an honest recognition of the costs that change could bring."

A poll released on Thursday, by Survation, found 53% were expected to vote No, and 47% yes. This was unchanged from August 28.