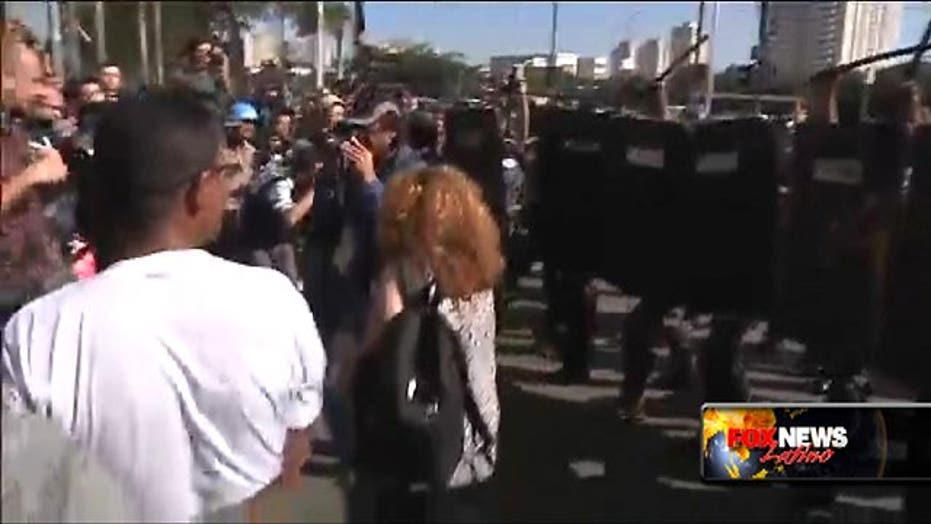 "A bomb went off literally one meter from me and exploded right on my leg," Bernard, a protester who refused to provide his last name. "We were doing nothing, we were just in front of them."

Police fired flash bang grenades and tear gas into the crowd of about 200 protesters about 15 kilometers from the stadium slated to host the opening match of the World Cup.

A number of the protesters, angered at the spending for World Cup projects, were injured in the melee in a confrontation with the civil police of São Paulo, who protesters said "were out of control."

The protests continued later in the morning as workers from the city's metro workers union and members of Brazil's communist party clashed at the Tauapé train station.

Demonstrators lit fires in the street to crest a barrier between themselves and civil police forces firing more tear gas and rubber bullets into the group.

Police and military forces had been on standby to address any disruptions that threaten to mar the kickoff of the 2014 World Cup Thursday afternoon when host nation Brazil takes on Croatia.

Security has been one of the major concerns for the Brazilian government, as an estimated 3.7 million visitors descend on the South American nation for the world’s largest sporting event. Officials have deployed 170,000 security forces, including federal troops, police and private security guards, to the host cities – more boots on the ground than the U.S. had during the height of the Iraq war - but strikes and demonstrations and fears of violent crime still loom over the tournament.

“There are always security considerations when you have urban areas that aren’t used to having a concentration of people over a short amount of time and also where passions run so high,” Cynthia Arnson, director of the Latin American Program at the Woodrow Wilson International Center for Scholars, told Fox News Latino.

The Brazilian government has not skimped on the cost of protecting fans and citizens during the Cup, spending $855 million on security measures alone – five times more than the $175 million South Africa spent when it hosted the tournament four years ago.

And the security investment can be seen and heard in host cities across Brazil.

Naval vessels patrol the beaches of Ipanema and Copacabana in Rio de Janeiro, and police helicopters are on constant patrol over the city. In São Paulo, a heavy police presence has been established in tourist zones in an effort to deter protesters from disrupting any of the festivities surrounding the opening ceremony and Brazil-Croatia match.

The country’s defense ministry has Army, Navy and Air Force personnel on high alert for any disturbances and has declared the air space within an 11-mile radius of the stadiums a no-fly zone from an hour before matches up to four hours following the games.

“We hope there are no incidents during FIFA World Cup activities, but we have taken precautions and are prepared to do our part,” Celso Amorim, Brazil’s defense minister said in a press release. “The integration between Defense and the Ministry of Justice is one of the pillars of this plan.”

Besides the stadiums, Brazilian law enforcement has also stepped up its security measures at major tourist attractions. At Rio de Janeiro’s Christ the Redeemer statue, the city’s municipal guard has added people to help protect the estimated 5,000 people who visit the hilltop site every day.

“We are taking many precautions to make sure everyone who comes here is safe and enjoys their stay here,” Jorge Murta da Silva, a spokesman for Rio de Janeiro’s municipal guard told Fox News Latino.

Petty crime, however, is still an issue in the city, with the area leading up to the statue being particularly dicey.

“We got mugged the other day hiking up the trail,” Suzanne McGavin of Australia, told FNL. “They took all our money and our cameras.”

The massive security spending – along with the enormous costs of building the stadiums and facilities to host the World Cup – is part of the reason why so many angry Brazilians have taken to the streets in the run-up to the tournament.

The protests that began in earnest last year around the time of the FIFA Confederations Cup, which was held in Brazil, and have diminished in size but not in frequency.

In Rio de Janeiro on Monday, the city’s teachers took to the streets in front of the World Cup’s media headquarters to protest low wages; subway workers briefly threatened a walkout and on Wednesday demonstrating taxi drivers blocked a section of Copacabana, causing major traffic congestion.

Also on Wednesday, check-in counter clerks, baggage handlers and janitorial staff who have been demanding raises of at least 5.6 percent for several months voted to strike starting at midnight. The work stoppage will affect Rio's Galeao international airport as well as the Santos Dumont airport, which connects Rio to other Brazilian cities.

The airport strike came only hours after some 1,500 subway workers in the city voted against going back on strike over a pay dispute. They had suspended their walkout on Monday amid a popular backlash and government pressure.

In the northern city of Natal, where the United States plays its first game on Monday against Ghana, bus drivers seeking a 16 percent pay increase will stay home Thursday for at least 24 hours.

“The World Cup provided a kind of synthesis for all of these different issues, partly because the World Cup is a national tournament so the stadiums are going up everywhere,” Dave Zirin, author of “Brazil’s Dance With the Devil: The World Cup, the Olympics and the Fight for Democracy,” told FNL.

“Every community had a bone to pick and say, ‘Well, wait a minute. Why are hundreds of millions of dollars being poured into this stadium when we have these particular needs?’”

Some experts, however, argue that the unrest in the final hours before the World Cup starts will not hinder the celebration. Citing the problems that Russia faced before hosting the Winter Olympics earlier this year in Sochi, the Wilson Center’s Arnson said that despite the issues of security and infrastructure Brazil will be able to successfully host the Cup and eventually the 2016 Summer Olympic Games.

“And there are going to be many rough spots, but, at the end of the day, I think that the games will show Brazil as a country that is struggling on many fronts, but also has many capacities, as well as a vibrant culture, and a vibrant democracy.”