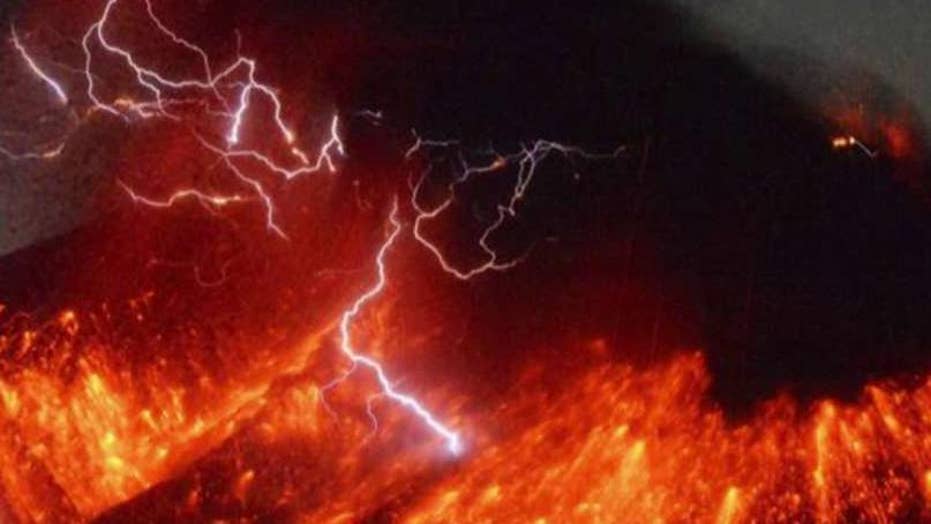 One of Japan's most active volcanos erupted spectacularly Friday evening with a fiery blast that sent lava rolling down its slope.

Japan's Meteorological Agency said Sakurajima on the southern island of Kyushu erupted at around 7 p.m.

Japanese television showed an orange burst out of the side of the volcano, near the summit, accompanied by lightning-like flashes. Dark gray smoke billowed into the sky.

The Meteorological Agency banned entry to the area, expanding an existing no-go zone around the crater to a 1.2-mile radius, according to public broadcaster NHK. There were no immediate reports of injuries.

He said rocks spewing out of the crater were expected to fall within the 1.2-mile zone from the crater. Smoke and ash rose 1.2 miles into the air, about half the height measured in 2013 in one of the mountain's biggest explosions in recent years, he said.

"I don't think there will be any serious impact from the explosion," Ishihara said. "But of course we must keep monitoring the volcanic activity."

The Japanese archipelago sits atop the Pacific "Ring of Fire," an arc of volcanoes and fault lines in the Pacific Basin, and has more than 100 volcanoes. The 2014 eruption of Mount Ontake in central Japan killed 57 people.