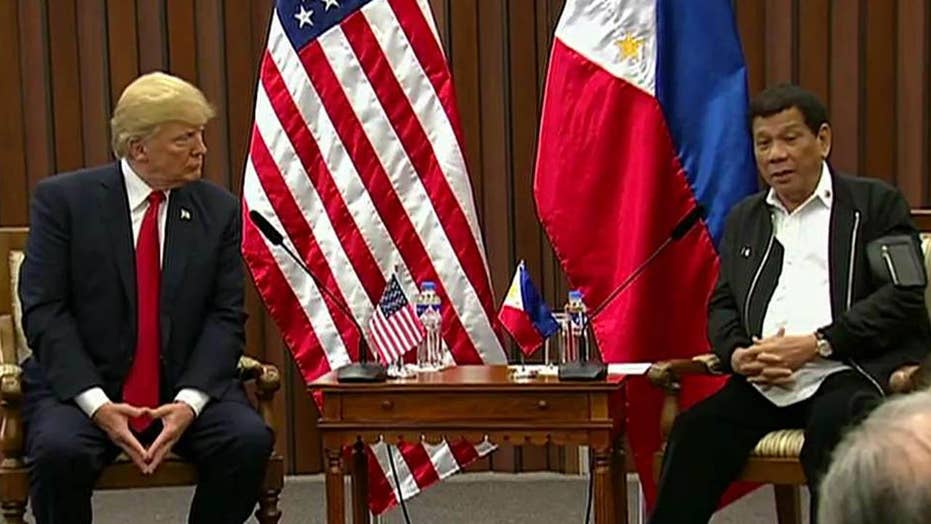 The Philippines notified the United States on Tuesday it would end a major security pact allowing American forces to train in the country – a pivotal move under President Rodrigo Duterte, who threatened to pull out of the agreement after his key ally's U.S. visa was terminated.

Foreign Secretary Teodoro Locsin announced on Twitter that he notified the U.S. Embassy in Manila that the Philippines is pulling out of the 1998 Visiting Forces Agreement (VFA). The accord allows American forces, along with U.S. military ships and aircraft, to rotate through Philippine military bases for roughly 300 joint exercises annually with Filipino troops.

“The Deputy Chief of Mission of the Embassy of the United States has received the notice of termination of the Visiting Forces Agreement,” Locsin tweeted. “As a diplomatic courtesy, there will be no further factual announcements following this self-explanatory development.”

The agreement will be terminated in 180 days unless both sides can negotiate a way to keep it. The U.S. Embassy in Manila acknowledged receipt of Manila’s notice and said Washington “will carefully consider how best to move forward to advance our shared interests.”

“This is a serious step with significant implications for the U.S.-Philippines alliance,” the embassy said in a statement. “Our two countries enjoy a warm relationship, deeply rooted in history. We remain committed to the friendship between our two peoples.”

Defense Secretary Mark Esper called the move “unfortunate,” adding, “I do think it would be a move in the wrong direction.” Both sides would have six months to come to a resolution before the agreement’s official end.

The U.S. is a longtime treaty ally, a major trading partner and the largest development aid provider to the Philippines.

Despite a 69-year alliance between the two nations, solidified by the 1951 Mutual Defense Treaty, President Duterte has lashed out against Washington in the past, specifically after the U.S. visa of ally Sen. Ronald dela Rosa was reportedly canceled over alleged human rights violations committed as national police chief.

After Duterte took office in 2016, dela Rosa enforced the president’s deadly anti-drug crackdown, carrying out a bloody campaign that reportedly killed thousands of mostly poor Filipinos, The Associated Press reported. Duterte threatened to terminate the security agreement after the visa cancellation and gave Washington a month to restore it. U.S. officials have not publicly reacted to the Philippine leader's demand.

In a speech Monday, Duterte said President Trump moved to save the agreement but added he rejected the idea. He accused the U.S. of meddling in Philippine affairs, including seeking the release of opposition Sen. Leila de Lima, whom he has accused of involvement in illegal drugs. She has dismissed the allegation as a fabricated charge meant to muzzle dissent.

“America is very rude. They are so rude,” Duterte said.

Aside from threatening to end the VFA, Duterte has said he will ban some critical U.S. senators from entering the Philippines.

Duterte has also barred Cabinet officials from traveling to the U.S. and turned down an invitation by Trump to join a special meeting the U.S. leader will host for leaders of the Association of Southeast Asian Nations in March in Las Vegas.

“All the engagements, all the freedom of navigation operations, all the exercises, all the joint training, having US military personnel in port, on the ground, on the flight line, does require that we have a mechanism that allows that, and that’s why the VFA is so important,” Cooper said in a teleconference with reporters on Monday.

Speaking before the Philippines Senate last week, Locsin proposed amending VFA, instead of scrapping it, arguing its termination would affect the joint exercises and other activities with U.S. forces “which the Philippine military and law enforcement agencies need to enhance their capabilities in countering threats to national security.”

The U.S. provided more than $550 million in security assistance to the Philippines from 2016 to 2019, Locsin said, adding that there may be a “chilling effect on our economic relations” if the Philippines draws down its security alliance with Washington.

Duterte first threatened to abrogate the VFA in late 2016 after a U.S. aid agency put on hold funds for anti-poverty projects in the Philippines. He has walked back on such threats but his government’s action on Tuesday is the most serious indication of his intent to set back military ties with the U.S.