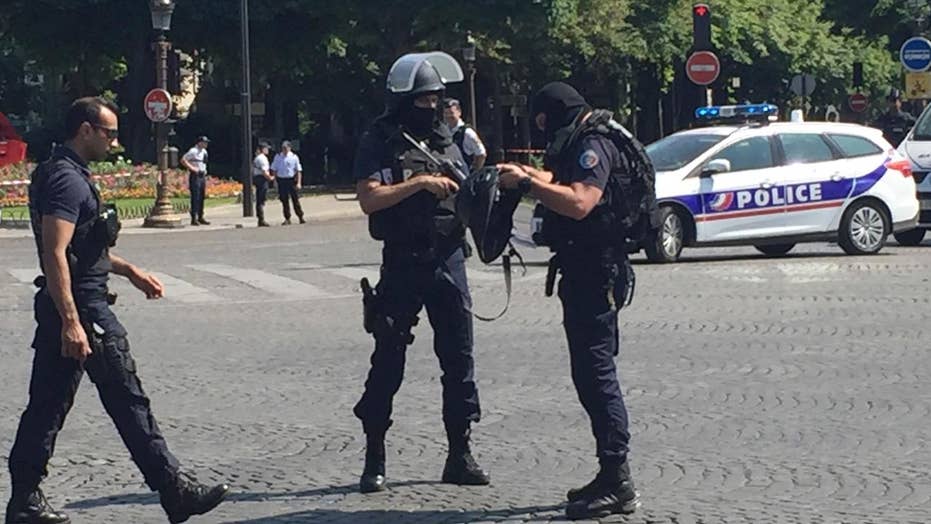 A suspect who tried to attack security forces on the Champs-Elysees shopping district in Paris Monday afternoon -- when he rammed his car into a police van -- had a rifle and explosives in his vehicle, French investigators said.

The attacker died shortly after the incident, the French Interior Minister Gerard Collomb said. The attacker, a 31-year-old man from the Paris suburb of Argenteuil, was badly burned after his car exploded when he deliberately crashed it into a police van. The police van caught fire, but it was quickly contained, officials said. The bomb squad was called to the scene.

Authorities discovered a gas tank and an AK-47 rifle in the attacker's car, Fox News confirmed. The man had been flagged by investigators earlier for extremism, French police said.

The attacker was identified as Adam Dzaziri. Dzaziri, who had been raised in the Salafi Islamic ideology, didn’t have a criminal record but he had been on France’s security watch list since 2015 due to ties to “the radical Islamist movement,” according to news.com.au.

France's anti-terrorism prosecutor has opened an investigation into the incident.

Eric Favereau, a journalist for Liberation newspaper who was driving a scooter behind the military officers, said he saw a car blocking the convoy's path, then an implosion in the vehicle. Favereau wrote that the officers smashed open the windows of the car while it was in flames and dragged out its occupant.

Other officers used fire extinguishers to put out the flames, Favereau said.

There were no other reported injuries.

Champs-Elysees is Paris' most popular avenue and one of the city's most famous tourist attractions. This was the second incident on the avenue this year. An attacker defending the Islamic State terror group shot and killed a police officer on the Champs-Elysees in April, days before a presidential election, prompting an extensive security operation. France is under a state of emergency after a string of deadly Islamic extremist attacks.

Collomb said said he will present a bill on Wednesday at a Cabinet meeting to extend the state of emergency from July 15, its current expiration date, until Nov. 1. He added that Monday's incident showed that a new security law "is needed" in France and the measure would "maintain a high security level" beyond the end of the state of emergency.

France has been under a state of emergency since the November 2015 attacks by Islamic extremists in Paris.

The incident also came after a van mowed down several people leaving a London mosque just after midnight on Monday. One person died and 10 people were injured in the assault.