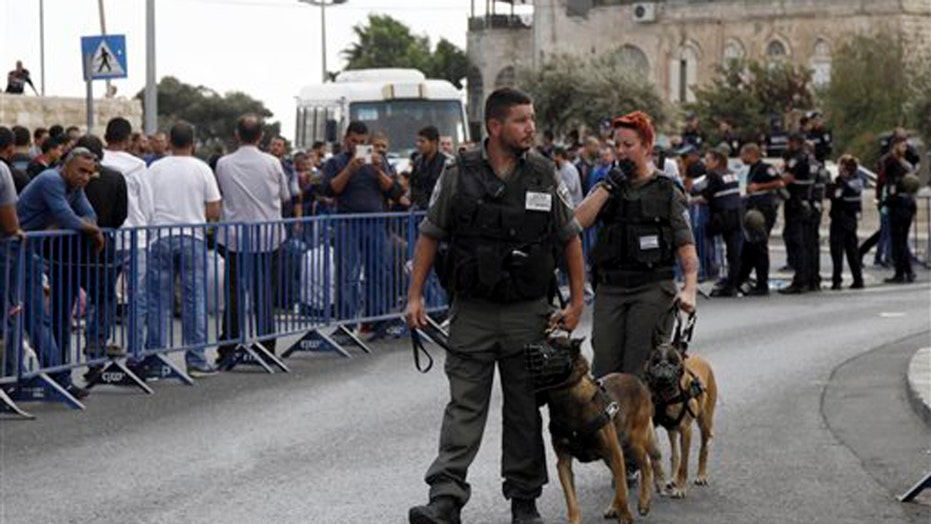 Series of stabbings in Israel, tension builds in Middle East

JERUSALEM – Palestinians carried out two stabbing attacks in Jerusalem on Saturday before being shot dead by police, while another two Palestinians were killed during a violent demonstration near the Gaza border fence, as violence continued to spread following a series of attacks against civilians and soldiers in the past week.

Jerusalem has seen a wave of stabbing attacks linked to tensions over a sensitive holy site in the Old City that is sacred to Jews and Muslims. In recent days the attacks have spread to the rest of Israel, while violent protests have erupted in the West Bank and along the Gaza border, where seven Palestinians were killed on Friday.

In the first stabbing on Saturday, a 16-year-old Arab attacked two Israelis who were walking from the Old City toward the city center, said police spokesman Micky Rosenfeld.

Police, who saw the men bleeding from stab wounds in their upper bodies and the knife-wielding Palestinian running toward them, opened fire, killing the attacker. The two victims were lightly wounded and evacuated to the hospital, Rosenfeld said. Photos taken by a witness to the attack showed a dazed-looking youngster in jeans and a sweatshirt holding a knife.

Later, just outside the Old City, another Palestinian stabbed two police officers, one in the neck. Rosenfeld said other police forces opened fire and killed the attacker, but also wounded one of their own. Three officers were taken to a hospital, one in serious condition.

On the Gaza frontier, meanwhile, protests resumed Saturday afternoon, with dozens of Palestinians throwing stones and rolling burning tires toward Israeli troops along the border fence. Gaza health officials said Israeli forces shot dead a 13-year-old and an 11-year-old. The Israeli military said it fired toward protesters who approached the border.

Later, the military said dozens of Palestinians breached the border and briefly entered Israel. The military said five were detained for questioning while the others retreated.

Military spokesman Lt. Col. Peter Lerner said that given the history of Palestinian cross-border attacks, Israel "must consider any breach of the buffer zone with Gaza to be a potential threat both to civilians and security forces."

The Gaza border has been largely calm since last summer's war between Israel and the Islamic militant group Hamas, which rules the coastal territory. A rocket was fired from Gaza into southern Israel overnight, without causing any casualties or damage. Israel has deployed an Iron Dome air defense battery in the region in case of further fire.

Rosenfeld said police in an Arab east Jerusalem neighborhood also came under attack overnight and responded with gunfire, hitting a 25-year-old. Health officials later confirmed the man had died of his wounds.

Violent protests broke out after the man's funeral, with rocks and firebombs hurled toward police, who opened fire and lightly wounded two people.

Some 1,500 people gathered in the Israeli-Arab city of Nazareth Saturday to demonstrate solidarity with the Palestinians. Other protests also took place in different Arab cities, where masked demonstrators clashed with police.

Recent days have seen a series of attacks by young Palestinians wielding household items like kitchen knives, screwdrivers and even a vegetable peeler. The youths had no known links to armed groups and have targeted Israeli soldiers and civilians at random, complicating efforts to predict or prevent the attacks.

The violence, including an apparent revenge attack in which an Israeli stabbed and wounded four Arabs on Friday, as well as increasing protests by Israel's own Arab minority, has raised fears of a new Palestinian intifada, or uprising.

At the start of the month, Palestinians shot two Israelis to death in front of their children in the West Bank. In a separate incident, a Palestinian wielding a knife killed two Israeli men and wounded a mother and toddler in Jerusalem before being shot dead.

Security forces were on high alert in Jerusalem in preparation for two big events Saturday evening that were expected to draw thousands: a Euro2014 qualifying soccer match pitting Israel against Cyprus, and an open-air concert by reggae rapper Matisyahu.

Leaders on both sides have called for calm. Israeli Prime Minister Benjamin Netanyahu has come under fire from hard-liners within his governing coalition, as well as opposition lawmakers, for not putting an end to the surging violence. Both sides held protests outside Netanyahu's residence Saturday night.

On Saturday, Netanyahu ordered the mobilization of three reserve border police companies to offer reinforcement amid the wave of attacks. In a previous measure meant to ease tensions, Netanyahu banned Cabinet ministers and lawmakers from visiting the sensitive Jerusalem holy site, fearing any high-profile spectacle could further enflame tensions.

The Jerusalem hilltop compound includes the Al-Aqsa mosque and is revered by Muslims as the spot where the Prophet Muhammad ascended to heaven. It is revered by Jews because it was the site of the two Jewish biblical Temples.

Many Palestinians believe Israel is trying to expand the Jewish presence at the site, a claim Israel adamantly denies and considers incitement to violence. Under a longstanding arrangement administered by Islamic authorities, Jews are allowed to visit the site during certain hours but may not pray there.

Palestinian President Mahmoud Abbas said his people had no interest in further violence and that he was committed to "peaceful popular resistance." Still, he voiced support for the protesters who have clashed with Israeli police at Al-Aqsa, hurling stones, firebombs and fireworks.