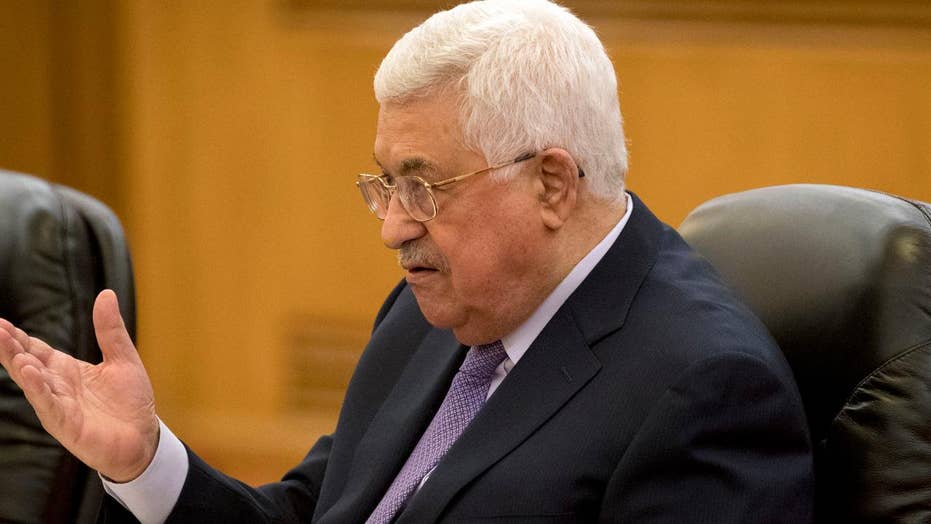 The controversy continues over Israel's decision to keep metal detectors at a holy site's entrances following a deadly attack; John Huddy has more for 'Special Report'

The Palestinian government, however, contends that the new law is aimed at computer hackers and other transgressors.

The ambiguously worded edict – which some see as a crackdown on news sites and social media comments -- allows the government of Palestinian President Mahmoud Abbas to imprison anyone deemed harmful to “national unity” or the “social fabric.”

Prison sentences range from one year to life for offenders who use digital means to endanger the safety of the state disrupt public order, or harm national unity or the social fabric, the new law says.

It’s “one of the worst” laws in the Palestinian Authority’s history and “a big setback to the freedoms in the West Bank,” said Ammar Dweik, head of the government-appointed Palestinian Independent Commission for Human Rights.

Other critics note that the law’s ambiguous phrasing means it can be abusively applied.

It effectively allows the government to detain anyone for any reason, said Ghazi Bani Odeh, a researcher for the Palestinian Center for Development and Media Freedoms (MADA).

“It opens the door wide to more violations of freedom of expression," he added.

"It opens the door wide to more violations of freedom of expression."

But Ibrahim Hamodeh, a prosecutor in the Palestinian attorney general’s office, denied that the edict is aimed at limiting free speech and dissent.

He said the law is about closing loopholes that have allowed hackers and other offenders to go unpunished.

“There is nothing about (restricting) freedom of expression in the new law,” he said, adding that the intention is to criminalize slander and defamation.

“One can criticize the president and his policy, but one cannot accuse the president or anyone else of treason or make fun of him in an image, or something like that,” he said.

"One can criticize the president and his policy, but one cannot accuse the president or anyone else of treason or make fun of him in an image, or something like that.”

On Tuesday, five journalists working for news sites affiliated with Hamas were detained on charges of violating the edict, an advocacy group for Palestinian journalists claimed.

Some of the journalists were detained on suspicion of “leaking sensitive information to hostile authorities,” a senior Palestinian security source told the official Palestinian news agency, the Jerusalem Post reported.

Separately, four other journalists were summoned for questioning regarding their social media posts criticizing the government.

Fada Arouri, a photojournalist for China’s Xinhua News Agency, was among those called in for questioning. He said he was told that his Facebook comments “could lead to disorder in the society.”