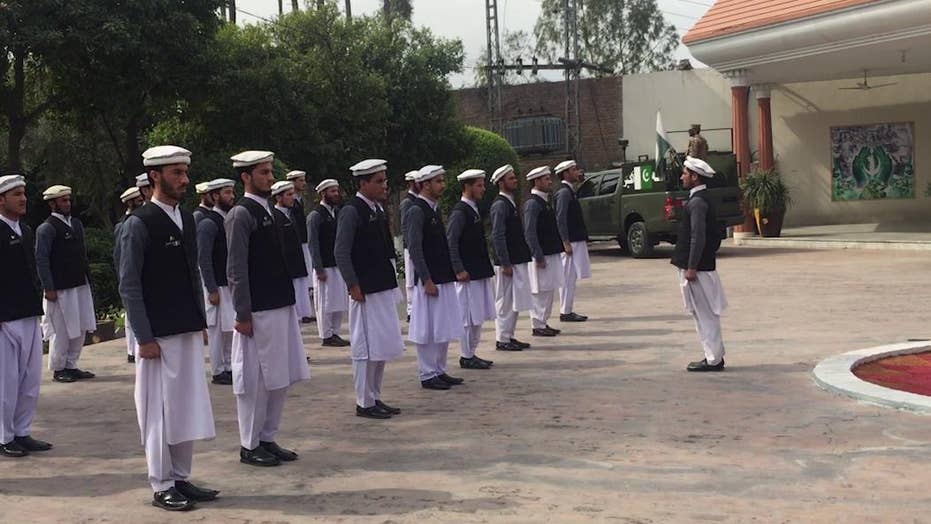 How to ‘rehab’ a radical Pakistani militant

Former militants attend a sort of “rehab for radicals” in Pakistan to learn life skills. The hope is they can find jobs instead of turning to a life of violence.

KHYBER AGENCY, Pakistan – Deep in the mountainous terrain of Pakistan’s Federally Administered Tribal Areas just miles from the Afghan border, around a dozen men - from their early 20s to their late 50s - salute and stamp feet to their national anthem.

The flag dramatically bursts open, and rose petals flutter down around their crisp black-and-white, traditional dress uniforms. Proud and emotional teachers look on as their students prepare to venture out into the wild western frontier.

It almost seems like the moment when a "Grease"-style song and dance number might break out - complete with “We Go Together” choreography. But Pakistani officials want the world to know this is serious stuff: This is no ordinary graduation, and these are no ordinary students.

They're now called “inductees," and have just completed at least six months of “deradicalization” rehabilitation. This particular group is made up of former members of groups like Lashkar e-Islam (LEI),  which in 2015 announced it was merging with the Taliban.

“This is not a jail, this is a deradicalization center. We want to ensure the gentlemen are skilled in their chosen vocation,” Pakistan Army official Zubair, who oversees security and programming at the center, told Fox News. Part jovial tour guide and part serious junior high science teacher in demeanor, Zubair said the center offers aims to "help them for a better life. The goal is for them to be useful members of society.”

Welcome to Rehab for Radicals, Pakistan-style. It’s called Saboon ll (meaning “First Ray of Sunlight”), and is a joint venture between the Federally Administered Tribal Areas and the Headquarters of the Pakistani Army’s Frontier Corps.

Following Pakistani military operations to clear terrorist pockets out of the area, some 650 militants subsequently surrendered. And by law, they could “neither be prosecuted nor released to the society.”

So, in January 2015, Saboon became the solution. And its doors in the foothills of the tribal area mountains opened wide.

Now, the center’s experts enthusiastically say, this crop is ready to re-enter the real world. Each graduate has been given a certificate of recognition and a Technical Training Diploma by the Khyber Institute of Technical Training, as well as a goodie bag filled with personal items, tools for their chosen tradecraft, and an NGO-donated farming kit.

Some even have a job lined up. That's apparently the magic ingredient that will keep the weapons away.

Zubair insists, with unwavering conviction, that rehab is also “helping out” the military. He pointed out what he noted were numerous examples of this throughout a recent Fox News tour of the facility: There is a gym, a patch of overgrown grass to practice agriculture tidbits, a health clinic where they can learn first aid. Then there are the classrooms, where students learn an array of skills from carpentry and computers to auto mechanics and mobile phone repair.

In contrast with their spirited security guards and teachers, the former fighters generally remain quiet, and expressionless. There is no hint of them being hardened fighters fresh from the Hindu Kush.

“When they come, all others, including us, are infidels in their view. That is the main challenge,” said one religious leader at the center. “But that is all changed now.”

The rules for release are minimum six months at the center, individual and group training, and an approved risk assessment from both a psychologist and a religious leader.

Recent grads must report to law enforcement every two weeks. If they are then deemed to be on their best behavior, the monitoring is reduced to once a month, then every two months. After a year, the “frequency of reporting” becomes very infrequent, managed on a case-by-case basis.

Social workers and psychologists also do home visits. “Many are uneducated, so that is a challenge,” one female worker said. “It is a hard job, but they do change.”

Program organizers claim 900 fighters have successfully passed through their doors - with a 100 percent success rate.

But then there are the critics, some of whome call that claim absurd.

“This is a ridiculous assertion. Intervention programs are not an exact science and absolutely not foolproof,” noted Robin Simcox, national security and foreign policy fellow at The Heritage Foundation. “They can do good, but we should never rule out that terrorists genuinely do recant their views.”