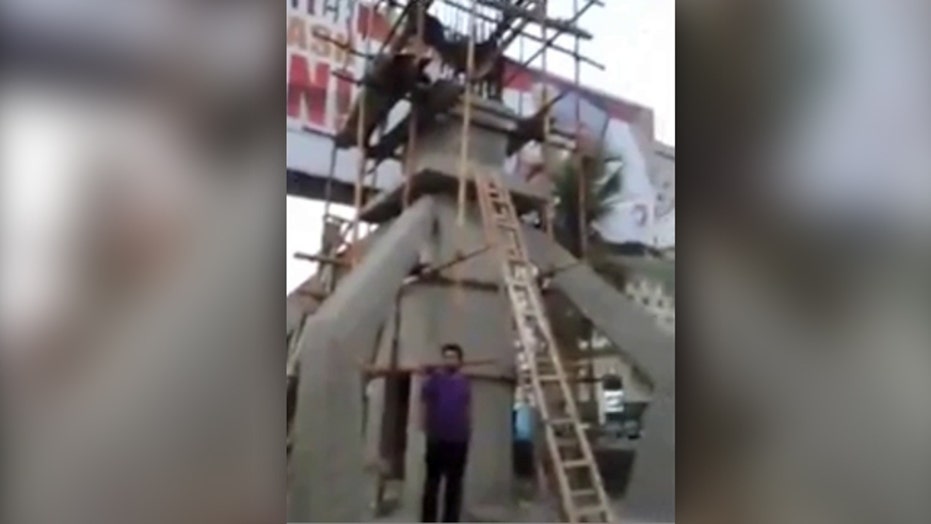 A Pakistani businessman who is building a 14-story cross in the heart of Pakistan's largest city claims he got the idea when God came to him in a dream.

Parvez Henry Gill, part of the small Christian minority in predominantly Muslim nation, is believes his 140-foot-tall cross will be a source of comfort and inspiration for the country’s followers of Christ, who often face persecution and violence.

“I said, ‘I am going to build a big cross, higher than any in the world, in a Muslim country,’” Gill told the The Washington Post. “It will be a symbol of God, and everybody who sees this will be worry-free.”

“It will be a symbol of God, and everybody who sees this will be worry-free.”

The cross is being built at the entrance to the largest Christian burial ground in Karachi, Gora Qabristan Cemetery, in the southern section of the city. Made of concrete and steel, the massive monument will boast a 42-foot wide crosspiece and will be the largest in Asia.

Tombstones in the graveyard are often defaced, but Gill hopes the cross while be a beacon of hope in his country for minority Christians and encourage them to remain in Pakistan.

“I want Christian people to see it and decide to stay here,” Gill said to the newspaper.

Pakistan's population of 180 million is about 90 percent Muslim, with Christians comprising just 1.5 percent.

In March, a teenager in the city of Lahore was doused in kerosene and burned alive. Nauman Masih, died from his injuries a few days later, according to local reports. A friend of Masih told local new agencies at his funeral that he had been murdered for his faith and that his attackers asked him if he was Christian before throwing fuel on him.

Also in March, 15 people were killed during two separate church services in Lahore by suicide bombers. And in November, an angry mob buried a Christian couple alive in a brick oven after they were wrongly accused of destroying a Koran.

Gill hopes his cross will send a positive message around the globe, and “tell the world that there are good people in Pakistan, too.”

Gill said that construction has been a risky job and has required some precaution since it began about a year ago. While the building team has both Muslim and non-Muslim members, many were reluctant to work on it.

While work has recently speeded up, there are still concerns.

“Security threats are everywhere and anything could happen any time and there is nothing we can do about it,” Anwar Sardar, general secretary of Karachi Christian Cemeteries Board (KCCB), which granted permission for the project, said recently.