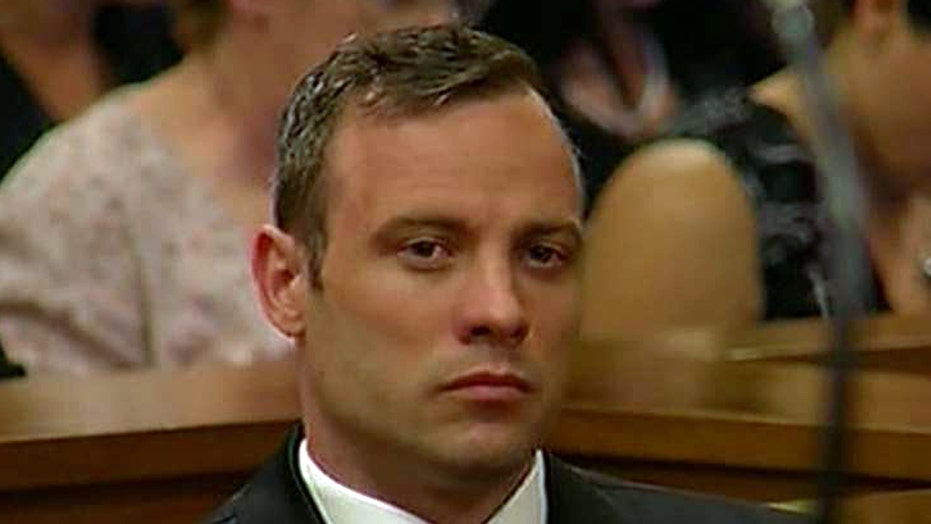 Ruling clears way for judge to sentence Pistorius to murder

PRETORIA, South Africa – Oscar Pistorius is a "broken" man whose mental state has deteriorated and he should be hospitalized and not jailed, a psychologist called by his defense testified at the start of a new sentencing hearing Monday.

Prosecutors, seeking a long jail term for the double-amputee Olympic runner after his conviction was changed to murder for killing girlfriend Reeva Steenkamp, immediately challenged that opinion of Pistorius. For one, they charged that Pistorius confronted a police witness in an aggressive manner at the courthouse on an earlier occasion.

Pistorius is currently living under house arrest after initially serving one year of a five-year prison sentence for manslaughter for shooting Steenkamp in 2013. But that manslaughter conviction was overturned last year by South Africa's Supreme Court, which convicted Pistorius of the more serious charge of murder.

Judge Thokozile Masipa, who initially acquitted Pistorius of murder, will decide the new sentence. The hearing is scheduled to run through Friday this week.

Pistorius' lawyers are arguing for leniency. South Africa has a minimum sentence of 15 years in prison for murder, although a judge can reduce that in some circumstances.

Dressed in a dark suit, Pistorius sat calmly on a bench during the testimony, mostly with his head down and sometimes covering his eyes with a hand.

The courtroom was packed with relatives, journalists and other onlookers. Police officers lined the wood-paneled walls. Barry and June Steenkamp, the parents of the model Pistorius killed by shooting multiple times through a toilet door in his home in 2013, were also present.

Clinical psychologist Prof. Jonathan Scholtz said Pistorius was "quite ill" and struggled with depression and post-traumatic stress disorder. Scholtz evaluated Pistorius in 2014, during his murder trial, and again last month.

Pistorius was now "despondent and lethargic, disinvested, and leaves his future in the hands of God," Scholtz said. He said he did not think Pistorius would be able to testify at the sentencing hearing because of his psychological problems.

Chief prosecutor Gerrie Nel pounced on that in his cross-examination of Scholtz, pointing out that Pistorius had recently given a TV interview but now claimed to be unable to testify in court.

Prosecutors had depicted Pistorius as an arrogant figure with a sense of entitlement and a love of guns. Nel subjected Scholtz to sharp questioning, referring to the courthouse incident with the police witness and trying to show that Pistorius was not a changed, remorseful man.

Nel quoted Pistorius as saying to the police officer: "Please give us space and privacy. You didn't do your job in any case."

The prosecutor said the defense team apologized for the spat. Pistorius' defense lawyer did not immediately comment on the allegation.

Nel also said Scholtz had disregarded a prison report that Pistorius was "aggressive and verbally violent" toward officials at the beginning of his imprisonment.

In his testimony, Scholtz recommended that Pistorius first be treated in a hospital rather than go to jail, and then work with underprivileged children. He noted that Pistorius had sold his guns, becomes jumpy even at the sound of gunfire on television, and is unlikely to resort to violence again.

He said Pistorius was subjected to several "traumatic and humiliating experiences" in prison, including being forced to shower while sitting on the concrete floor because of his disability, and being treated "like an animal in a cage."

Nel challenged Scholtz on some of the claims. For example, Scholtz said Pistorius told him that he had heard an inmate being raped by another, and later saw the body of the alleged victim after he had hanged himself. Nel disputed the assertion. Nel also said Pistorius was not confined to his cell for 18 hours a day, as the psychologist said he was, but rather was allowed to walk around a separate wing of the prison he shared with only one other inmate.

"He complained about everything," Nel said of Pistorius.