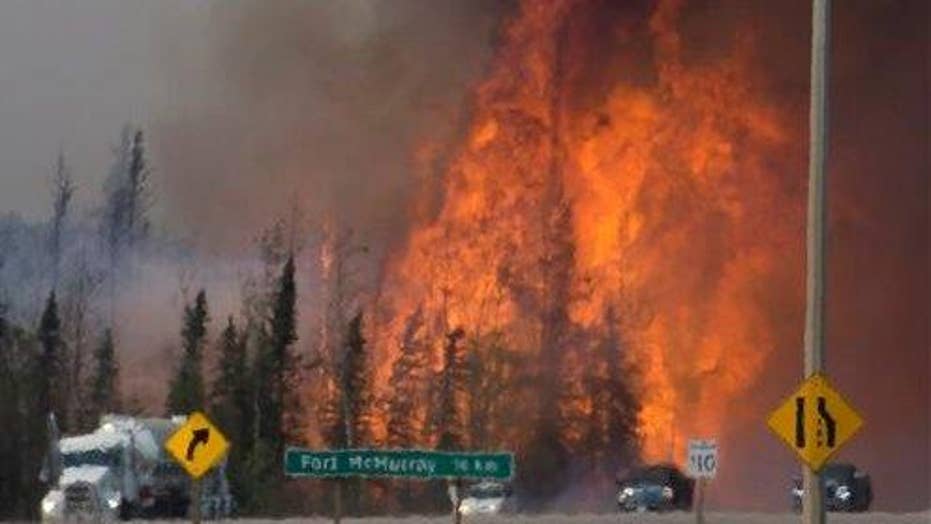 Thousands forced out of their homes in Alberta

LAC LA BICHE, Alberta – Canadian officials hoped to complete the mass evacuation of work camps north of Alberta's main oil sands city of Fort McMurray on Saturday, fearing a growing wildfire could double in size and reach a major oil sands mine and even the neighboring province of Saskatchewan.

Chad Morrison of Alberta Wildfire said the massive blaze in the province covered more than 156,000 hectares (385,476 acres) and could be 200,000 to 300,000 hectares (741,300 acres) by the end of Saturday because of high temperatures, dry conditions and high winds. Morrison expects to be fighting the fire in the forested areas for months.

"In no way is this fire under control," Alberta Premier Rachel Notley said.

Thousands of displaced residents were getting a sobering drive-by view of some of the burned-out neighborhoods as convoys continued Saturday. The images were largely ones of devastation — scorched trucks, charred homes and telephone poles, burned out from the bottom up, hanging in the wires like little wooden crosses. No deaths or injuries were reported.

Notley said about 12,000 evacuees have been airlifted from oil sands mine air fields over the past two days and about 7,000 have been evacuated in police escorted highway convoys. She said the goal was to complete the evacuation of evacuees from northern work camps by late Saturday.

Officials said the fire could burn to the edges of the Suncor oil sands facility, about 15 miles (25 kilometers) north of Fort McMurray. Non-essential staff have been evacuating and efforts to protect the site were underway.

Growth in Alberta Wildfires from May 4th to 5th | Graphiq

"This facility, it should be emphasized, is highly resilient to forest fires as we have seen in past when it's previously been threatened by very large fires," Notley said.

Oil sands mines are resilient to fires because they are cleared and have no vegetation, said Morrison. He said the sites also have very good industrial fire departments, and that the fire wasn't expected to reach the oil sands mines north of Suncor.

The fire and mass evacuation has forced a quarter or more of Canada's oil output offline and was expected to impact an economy already hurt by the fall in the price of oil. The Alberta oil sands have the third-largest reserves of oil in the world behind Saudi Arabia and Venezuela. Its workers largely live in Fort McMurray where some neighborhoods have been destroyed.

Police said many parts of smoke-filled Fort McMurray are burnt and visibility is low. Officers wore masks as they checked homes to make sure everyone was out.

More than 80,000 people have left Fort McMurray in the heart of Canada' oil sands, where the fire has torched 1,600 homes and other buildings. Gas has been turned off, the power grid is damaged and water is not drinkable. Officials said there is no timeline to return residents to the city, but the Alberta government has begun preliminary planning, though it stresses fighting the fire is still the first priority.

About 25,000 evacuees moved north in the hours after Tuesday's mandatory evacuation, where oil sands work camps that usually house employees were used to house evacuees. Officials are moving everyone south where it is safer.

Syncrude, a major oil sands mining company, also shut down operations and evacuated. The company said in a statement that while there is no imminent threat from fire, smoke has reached its Mildred Lake site. They intend to have all personnel out this weekend and started the evacuation early Saturday.

Syncrude said they will restore operations when there is no risk and said despite the extraordinary measures, the jobs of more than 4,800 employees remain secure.

Morrison of Alberta Wildfires said the fire is burning away from communities. He said cooler temperatures were expected Sunday and over the next week. "We feel that it will hold there if we get some cooler conditions over the next two or three days," he said.

They could get rainfall Sunday but significant rainfall is needed.

The 156,000 hectares (385,476 acres) includes burned areas and those areas still in flames. The fire started last Sunday and has destroyed more than 1,500 square kilometers (580 miles) of northern Alberta forest.

Lac La Biche, Alberta, normally a sleepy town of 2,500 about 175 kilometers (109 miles) south of Fort McMurray, was helping thousands of evacuees, providing a place to sleep, food, donated clothes and even shelter for their pets.

Jihad Moghrabi, a spokesman for Lac La Biche County, said that 4,400 evacuees have come through The Bold Center, a sports facility in town. At the center, tables were piled with clothes, towels and other items. The center was offering three free meals a day and other services, including mental health services. A kennel housed people's pets on site.

Philip Wylie, wife Suda and 13-month-old daughter Phaedra, were among those staying at the center after evacuating their apartment in Fort McMurray on Tuesday.

"Trees were blowing up against our vehicles," Philip Wylie said of the caravan drive out of town. "We don't know what we're going to go back to, or when we can go back."

Suda Wylie said the day they had evacuated started out clear, and they thought they would be fine. Then, in a matter of hours, she said she opened the blinds and "the sky was orange."

They rushed to pack, grabbed documents, passports and their laptops before they left, but thinking that they would be able to return home soon, only packed enough clothes for two days.

The family spent the first night camping on the property of a sandpit after the owner said they could set up camp near a pond. Once they realized that the fire was growing and they couldn't get home, they went to an evacuation center that was itself ultimately evacuated because of the fire. They arrived at The Bond Center late Wednesday night.

"Everything that I'm wearing right now, besides my shoes and my socks, is donation," Philip Wylie said.