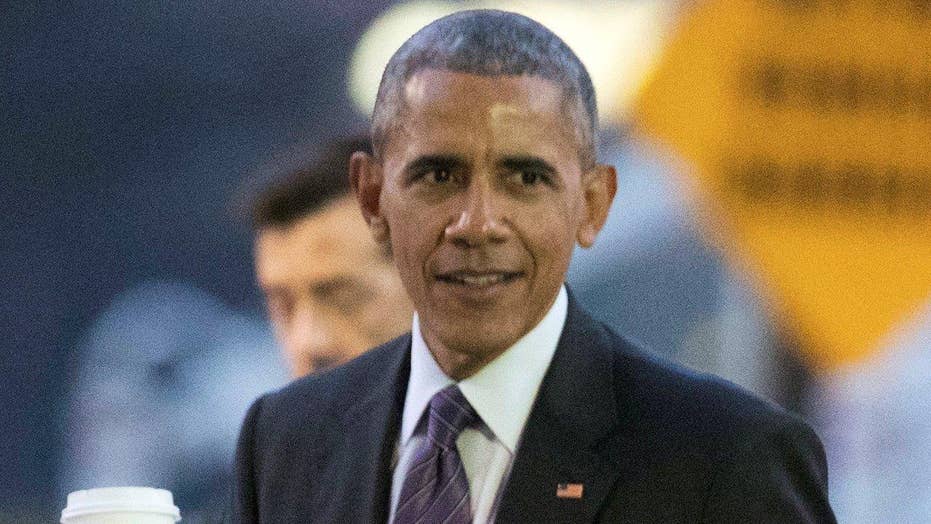 Obama focusing on regulatory footprint before end of term

The executive branch is on pace to enact more than 3,700 rules and regulations this year; James Rosen has the story for 'Special Report'

The Obama administration is introducing a last-minute barrage of costly environmental regulation pronouncements that Republicans have vowed to repeal as soon as possible after Donald Trump’s January 20 presidential inauguration.

The recent outpouring adds to the administration’s dubious record of producing more than 600 major regulations -- those estimated to cost more than $100 million each -- during its tenure, according to a study by the American Action Forum, a Washington-based think tank.

Case in point: an announcement by the Environmental Protection Agency, one of the administration’s most energetic rule-makers, on Wednesday that  after lengthy study, it would push ahead with tougher greenhouse gas emission standards, equivalent to 54.1 miles per gallon fuel efficiency, for passenger cars and light trucks for the years 2022-2025.

EPA says the standards will prevent emission of some 6 billion metric tons of greenhouse gases over the vehicles’ life span. Technically speaking, EPA’s administrator has until April 18, 2017,  to make a so-called “final determination” about the rules -- but is doing it sooner, the agency says, for reasons of “long-term regulatory certainty and stability.”

Translation: EPA Administrator Gina McCarthy is certain to be out of the job by then, and the ruling will likely hit a brick wall in a much more climate-skeptical Trump administration.

The public has until December 30 -- three weeks before Inauguration Day -- to comment on the move.

Within hours, the EPA announcement was decried by Sen, Jim Inhofe, R-Okla., chairman of the Senate Environment and Public Works Committee, as  “another administrative avenue for President Obama to force his climate ideologies on American businesses and consumers,” through a fuel economy program that is “broken and rife with inequalities.”

Inhofe said he looked forward “to working in the next Congress with the new administration to pare back all of the legacy-saving regulatory actions this administration will continue to advance as their January 20 deadline approaches.”

Inhofe’s legacy-saving jibe was apt enough: the fuel economy final determination makes explicit reference to the Paris climate agreement signed by the U.S. and more than 190 other countries, which also came into force this month -- and from which President-elect Trump vowed on the campaign trail to withdraw (Trump has since declared he is “keeping an open mind” about the document.)

Moreover, the determination, while it makes no additional regulations post-2025, makes the case for further emissions reductions, averaging 4.3 percent annually, for the following quarter-century in order to meet the long-term goals of the Paris agreement.

Cars and trucks are hardly the only products to get the eleventh-hour regulatory treatment from EPA and other agencies, in the waning months of the administration.

In August, EPA and the Department of Transportation finalized additional follow-on standards through 2027 for emissions from medium- and heavy-duty trucks and other vehicles that the agencies said would save 1.1 billion metric tons of greenhouse gases, even while they pushed up the price of big trucks by some $14,000 by some estimates.

Transportation Secretary Anthony Foxx called the new rules “a huge win for the American people.” The estimated cost of the regulation, according to American Action Forum, is about $29.3 billion.

The EPA’s first-ever regulations covering methane emissions from the oil and gas industry were finalized in May, and significantly toughened from an earlier version. They are now the focus of a court battle led by the state of Texas, which called the tough emission standards a “gross demonstration of federal over-reach.”

Meantime, the most expansive -- and expensive -- regulatory change of all, the administration’s Clean Power Plan, which aims to reorganize much of the nation’s entire electrical generating system to reduce greenhouse gas emissions, has been stayed by the Supreme Court while an appeals court rules on its legality.

But there is much more. In all, estimates run to nearly 100 new rules that could still emerge from administration agencies before power passes to the Trump administration; earlier this month, House Majority Leader Kevin McCarthy officially warned federal agencies not to finalize any more rules and regulations before inauguration.

As the latest passenger car and truck determination shows, the message hasn’t exactly gotten through. Republicans have further threatened to use the Congressional Review Act starting in January to repeal any regulation the Obama administration finalized after May 30, but that too could prove to be more work than they realize -- with the administration’s final rule-making binge as the ultimate tsunami.

The biggest single force behind the latest upwelling of gas rules is the goals that the Obama administration set to cut U.S. greenhouse emissions by 17 percent from 2005 levels by 2020, and 26 to 28 percent by 2030 -- long after the administration departs.

In its second biennial report on progress toward those goals, presented earlier this month, at a follow-on to the United Nations-sponsored Paris climate agreement meeting in Marrakech, the Administration announced that “factoring in all of our planned additional measures, including measures that have been proposed by not yet finalized,” the U.S. was “on track” to hit the 17 percent figure.

The “additional measures also have the potential to drive our emissions down to 22-27 percent below 2005 levels by 2025” -- tantalizingly close to the draconian stretch goal.

Among the areas where the additional gains could come: changes in U.S. land-use and forestry; new standards for equipment and appliance efficiency, tougher building standards for energy efficiency, and even greater adoption of biofuels.

The administration also has been seeking to lock in its efforts internationally, through new multilateral agreements and integrated greenhouse reduction plans with neighboring Canada and Mexico.

As part of a 20-nation effort called Mission Innovation, the administration announced, among other things, that it hoped to double U.S. spending on clean-energy research and development to some $12.8 billion by 2021 -- even though the Obama team will be long gone.

A billionaires’ club of tycoons, including Bill Gates and George Soros, also have been enlisted in the effort, to mobilize billions more in private-sector financing for the clean-energy effort.

A shower of additional “clean” transportation and infrastructure projects were further included in the Obama administration’s proposed 2017 budget, ranging from the start of a $7 billion annual spend on advanced rail technology to $750 million more toward a promised $3 billion for the U.N.-sponsored Green Climate Fund, which Congress has already opposed without success.

An administration spokesperson underlined to Fox News that “clean energy R and D has enjoyed bipartisan support during a number of administrations and across sectors.” The official pointed to a Senate Appropriations Committee endorsement last April of more than $37 billion in energy and water development funding.”

The Obama budget is now a dead letter, in the process of being replaced by short-term financing for the federal government through the early months of next year.

Republican legislators have vowed that the short-term fix will itself be a “clean” project -- that is, not festooned with special interest deals and boondoggles, or any of the huge laundry list of projects contained in the still-born budget.

They could even succeed. But the real challenge may come in the mountain of infrastructure spending that President-elect Trump and the opposition Democrats seem to agree is needed to jump-start American economic growth in 2017 and the years ahead.

A mammoth wave of spending, after all, is how the Obama administration launched itself in the first place on its path to a legacy that the victorious Republicans now say they deplore.

The administration spokesperson put it this way: “While we can’t speak to what the future administration may or may not do, investing in clean energy R & D to increase U.S. competitiveness, strengthen infrastructure and enhance national security remains an important priority for the Obama administration.”