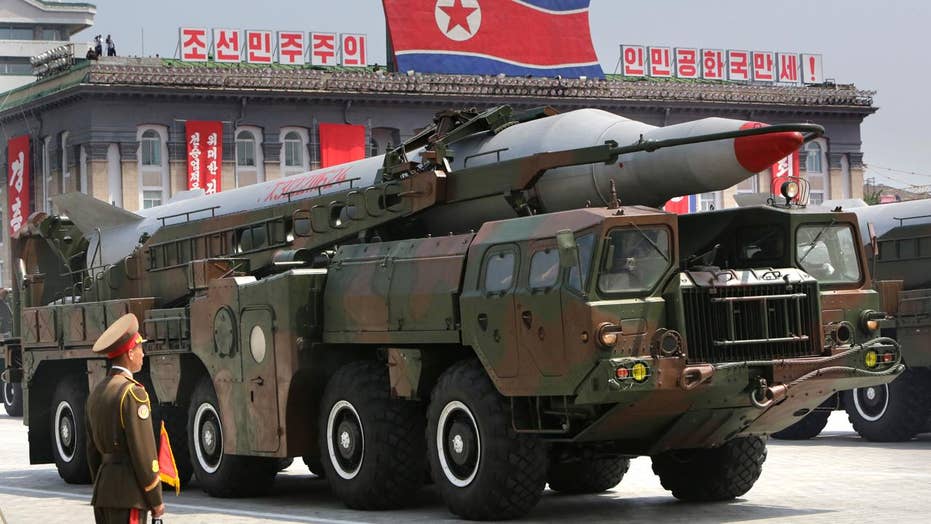 North Korean dictator Kim Jong Un, once a source of global ridicule, is no longer being treated as a joke now that the Hermit Kingdom's destructive power can match his increasing belligerance.

The 33-year-old, third-generation strongman has long been a punchline for everything from his “dangerous obsession with cheese” to his prodigious girth in a nation of starving subjects.

The satirical paper The Onion named him “Sexiest Man Alive” in 2012, and Reuters reported - quite seriously - that his full, self-designated title is "Dear Respected Comrade Kim Jong Un, Chairman of the Workers' Party of Korea, Chairman of the State Affairs Commission of the Democratic People's Republic of Korea and Supreme Commander of the Korean People's Army."

But with North Korea closer than ever to being capable of launching a nuclear attack on the U.S., mockery of Kim has given way to real concern around the world.

To kick off 2017, Kim used his annual address on state-run television to boast that his regime was in the final stages of preparations to test-launch an intercontinental ballistic rocket.

Kim has proven even more of a wild card than his father.

"Research and development of the cutting-edge tech weapons are actively progressing and strengthening our defense capabilities, including last stage preparation of tests for Intercontinental Ballistic rocket launch have been continuously succeeding," Kim said.

“We can expect an [intercontinental ballistic missile] test this year with full capability within the next few years,” former CIA official Bruce Klingner told Fox News earlier this month.

IS IT TIME FOR OUR DEALMAKER IN CHIEF TO TALK WITH NORTH KOREA?

Spicer added that Trump “also emphasized that the administration is taking steps to further enhance our ability to deter and defend against North Korea’s ballistic missiles using a full range of the United States’ military capabilities.”

The 33-year-old dictator told his countrymen in January that North Korea is close to possessing the ability to strike around the world. (Associated Press)

Experts believe that North Korea already has the ability to strike the U.S.-friendly nations of Japan and South Korea.

U.S. Secretary of State Rex Tillerson will visit South Korea Friday, as part of his first official trip to the region that also includes Japan and China. It is expected he will discuss North Korean containment with leaders in Seoul.

“The answer to the North Korean threat isn’t bombing missile sites or putting boots on the ground, but putting technology in the sky that both the U.S. and Japan could deploy in a very short time—technology that can all but eliminate Pyongyang’s menace,” he wrote in a recent Wall Street Journal Op-Ed.

“Technology exists now for stopping a North Korean missile launch much earlier, in its boost phase," Herman wrote. "It’s called boost-phase intercept, or BPI, and the U.S. and Japan have the means to deploy it."

The youngest son of infamous former North Korean leader Kim Jong Il, Kim Jong Un assumed power when his father died in 2011. His bizarre and brutal tenure as supreme leader has been unpredictable to say the least. Said to be obsessed with basketball, he hosted former NBA star Dennis Rodman in 2014.

A favored method of execution is to blow the doomed away with anti-aircraft guns.

While his father seemed to issue threats and rattle sabres as a negotiating ploy, always pulling back after gaining concessions from his targets, Kim seems to have inherited his father's brutality but not his savvy.

"Kim Jong Un does not listen to any voice, and this leads us to view Kim Jong Un's mental state as uncontrollable," said South Korea's first female president, who did not outlast her Pyongyang counterpart. She was ousted last week in a corruption scandal.

Article headlines paint a picture that would be comical, if the situation weren’t so grave.

News reports from around the world still poke fun at the rotund rogue dictator, but take on an increasingly ominous tone these days.

- The Sun: "Kim Jong-un laughs maniacally as he watches missile test ‘training for attack on US bases in Japan’ – as Americans deploy THAAD missile defence system to South Korea"

"Only regime change in Pyongyang will definitely end the North Korean missile and nuclear threat," Herman wrote. "Meanwhile, unmanned BPI could allow us all to rest easier—and deprive Kim Jong Un of his chief tool for international blackmail.”