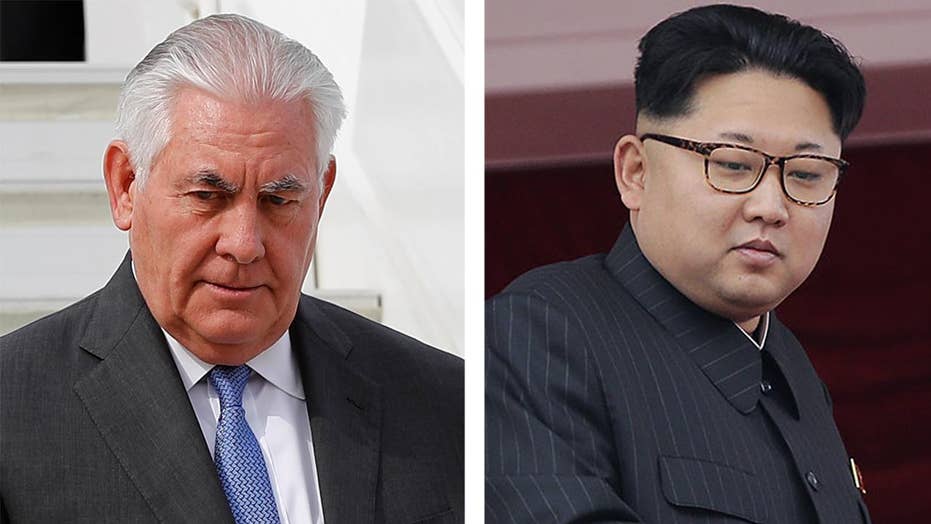 While Tillerson expresses a desire for a diplomatic solution, he says the U.S. is using sticks, not carrots, to get Kim Jong Un to the table; reaction from the Washington Examiner's Tom Rogan.

As North Koreans return home this week from the Pyeongchang Winter Games, possibly without any medals, Olympians hope to avoid the gulags — a fate the losers of the 1966 World Cup are believed to have experienced.

Twenty-two North Koreans participated in the 2018 Olympics, with the support of the nation’s handpicked cheering squad, for the regime’s ninth representation in a Winter Games.

Competing in figure skating, skiing and ice hockey — as part of a joint team with South Korea — the country has failed to medal in any event, surely disappointing leader Kim Jong Un, whose family allegedly sentenced the failed World Cup athletes to concentration camps for the loss.

The North Korean team which lost in the 1966 World Cup was allegedly sentenced to concentration camps for the loss. (Syndication International/Mirrorpix/Newscom via ZUMA Press)

A survivor of the North Korea gulags, according to the U.K.’s Daily Star, wrote about meeting the World Cup squad at the Yodok gulag, where the team reportedly said they were imprisoned for losing 5-3 to Portugal.

In 2010, the losing North Korea World Cup team reportedly endured a six-hour “grand debate” in which they were criticized for their “betrayal of the trust of Kim Jong Un," South Korean newspaper The Chosun Ilbo reported.

Will thaw between North, South Korea go beyond the Olympics?

On 'Journal Editorial Report,' Amb. John Bolton weighs in on the politics at play at the sporting event.

“Considering the high hopes North Koreans had for the World Cup, the regime could have done worse things to the team than just reprimand them for their ideological shortcomings," an intelligence source told the outlet at the time.

"In the past, North Korean athletes and coaches who performed badly were sent to prison camps,” the source added.

North Korea has only won two Winter Olympic medals: a silver and a bronze, in speedskating and short-track speedskating. Kim has long pushed for stronger athletes, and in 2015 vowed to improve the country’s lackluster record.

In a statement titled "Let Us Usher in a New Golden Age of Building a Sports Power in the Revolutionary Spirit of Paektu,” Kim called on the ruling party to help athletes win at the Olympics, world championships and other international contests.

"Only sportspeople can cause the flag of our republic to be hoisted in the sky of other countries in peace time," the statement said.

But the North was apparently unprepared for this year’s Games as the country didn’t even have a roster ready until January.

Only two of the 22 athletes that ended up coming to the Olympics had qualified in pre-Games' competitions. It entered seven men and 15 women. All but three of the women were on the joint ice hockey team, which gave up 22 goals and scored just once in its first four games.

With so few athletes prepared when Kim announced on New Year's Day that he wanted to send a delegation to the Games, the North instead dispatched more than 140 musicians, a demonstration taekwondo team, the 229-woman strong cheering squad and 21 journalists, despite the Olympics having received virtually no coverage back home in the North.

But, despite their losses thus far, North Korea might have a chance to medal.