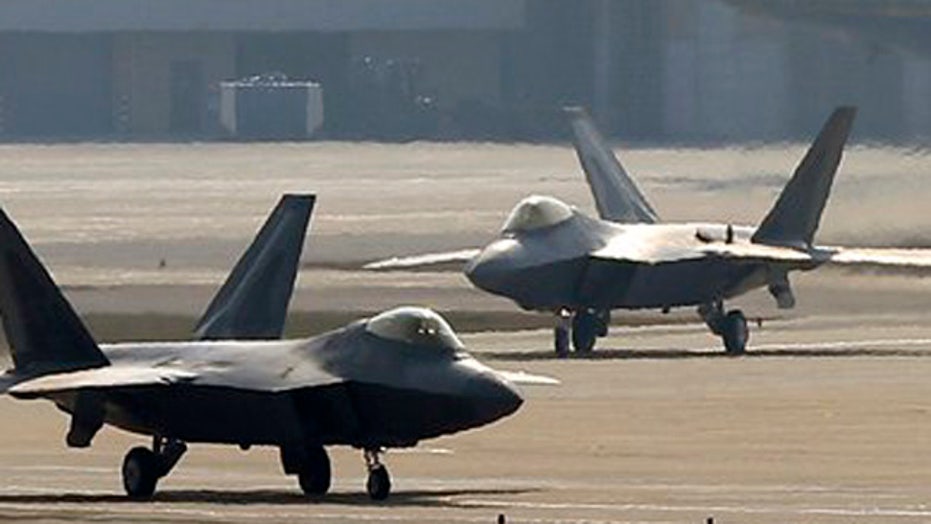 Amb. John Bolton breaks down North Korea's recent threats towards the US and South Korea and 'The Daily Show'-inspired diplomatic flare-up with Egypt

PAJU, South Korea – North Korea on Wednesday barred South Korean workers from entering a jointly run factory park just over the heavily armed border in the North in the latest sign that Pyongyang's warlike stance toward South Korea and the United States is moving from words to action.

The Kaesong move came a day after the North announced it would restart its long-shuttered plutonium reactor and a uranium enrichment plant, both of which could produce fuel for nuclear weapons that Pyongyang is developing and has threatened to hurl at the U.S. but which experts don't think it will be able to accomplish for years.

The North's rising rhetoric over recent weeks has been met by a display of U.S. military strength, including flights of nuclear-capable bombers and stealth jets at the annual South Korean-U.S. military drills that the allies call routine but that North Korea claims are invasion preparations.

The Kaesong industrial park started producing goods in 2004 and has been an unusual point of cooperation in an otherwise hostile relationship between the Koreas, whose three-year war ended in 1953 with an armistice. Its continued operation even through past episodes of high tension has reassured foreign multinationals that another Korean War is unlikely and their investments in prosperous dynamic South Korea are safe.

"The Kaesong factory park has been the last stronghold of detente between the Koreas," said Hong Soon-jik, a North Korea researcher at the Seoul-based Hyundai Research Institute.

He said tension between the Koreas could escalate further over Kaesong because Seoul may react with its own punitive response and Pyongyang will then hit back with another move.

It is unclear how long North Korea will prevent South Koreans from entering the industrial park, which is located in the North Korean border city of Kaesong and provides jobs for more than 50,000 North Koreans. The last major disruption at the park amid tensions over U.S.-South Korean military drills in 2009 lasted just three days.

Seoul's Unification Ministry spokesman Kim Hyung-suk said Pyongyang was allowing South Koreans to return home from Kaesong. Some 33 workers of about 860 South Koreans at Kaesong returned Wednesday. But Kim said about 480 South Koreans who had planned to travel to the park Wednesday were being refused entry.

Trucks streamed back into South Korea through its Paju border checkpoint in the morning, just minutes after heading through it, after being refused entry into the North.

Pyongyang threatened last week to shut down the park, which is run with North Korean labor and South Korean know-how. It expressed anger over South Korean media reports that said North Korea hadn't yet shut the park because it is a source of crucial hard currency for the impoverished country.

About 120 South Korean companies operate factories in Kaesong which produced $470 million of goods such as clocks, clothing and shoes last year that are trucked back to the South for export to other countries. The industrial park is crucial for the small businesses that operate there to take advantage of North Korea's low wages but not important for the South Korean economy overall.

It has more significance to cash-strapped North Korea since, according to the South Korean government, wages for North Korean workers totaled some $81 million last year. That has underlined the risks that North Korea's brinkmanship will result in a miscalculation that results in an even more dangerous polarization of the Korean peninsula.

Barring entry to South Koreas is a "slap in the face" after the South Korean government recently extended medical aid to the North, said Lee Choon-kun, a North Korea researcher at the Korea Economic Research Institute, a Seoul-based think tank. "I see this as a start for more provocative actions," he said.

"The North has made too many threats not to stop short of any real action."

Kaesong, initially conceived as a test case for reunification and reconciliation, also provides an irksome reminder for Pyongyang that what it lacks, the South has in abundance — material prosperity. An enormous gap emerged between the two Koreas in the decades after the Korean War as the South embraced a form of state-directed capitalism while the North adhered to communist central planning.

Every morning, North Korean workers commute to the complex on the edge of Kaesong on South Korean-made Hyundai buses. Once inside the gates of the complex, it's a world apart. The paved streets and sidewalks are marked with South Korean traffic signals and signs and the parking lots are filled with the Hyundai, Samsung and KIA cars driven by South Korean managers.

Inside several factories visited by The Associated Press last year, the posters on the walls are not party slogans but safety warnings. "Beware of fires," read one; "Wash your hands" read another. While most factories in North Korea are drafty, and few have running water, the facilities in Kaesong are equipped with hot water, flush toilets and air conditioners.

In the rest of the Korean Peninsula, it is illegal for Koreans from North and South to interact without government permission. But inside Kaesong, North Korean workers work side by side with South Korean managers, discussing orders and mapping out production.

However, they tend not to socialize with one another. At most factories, North Korean workers take their meals in cafeterias that serve basic stews and rice while the South Koreans dine separately.

"They were working normally when I called them in the morning," said Park who returned to Seoul after being refused entry into Kaesong. "The problem is food. I hope North Korea would at least let us send food. We have to send food and some materials for production every day."

On Tuesday, a senior South Korean government official said Seoul has a contingency plan for its citizens in Kaesong. But he said the government hoped the tension would not lead to a shutdown of the complex. He spoke on condition of anonymity, saying he was not authorized to speak publicly to the media.