U.S. ambassador to the United Nations addresses emergency meeting of the U.N. Security Council on suspected chemical attack in Syria.

U.S. Ambassador to the United Nations Nikki Haley delivered a forceful repudiation of Syrian President Bashar al-Assad and his supporters while delivering remarks to the U.N. Security Council on Monday, following an alleged chemical attack in Syria that killed at least 40 people over the weekend.

“We are on the edge of a dangerous precipice,” Haley said. “The great evil of chemical weapons use that once unified the world in opposition is on the verge of becoming the new normal. The international community must not let this happen.”

Saturday's suspected poison gas attack unfolded in a rebel-held town near Damascus amid a resumed offensive by Syrian government forces after the collapse of a truce. Syrian activists, rescuers and medics said families suffocated in their homes in Douma, northeast of Damascus.

Recalling a similar chemical attack in Khan Sheikhoun in April 2017 that killed nearly 100 people, Haley lamented, “the day we prayed would never come has come again.” The 2017 attack prompted the U.S. to launch dozens of cruise missiles at a Syrian airfield to dissuade Assad from using chemical weapons in the future, officials said.

But during the weekend, images of dead and sick women and children again circulated following another alleged chemical attack. 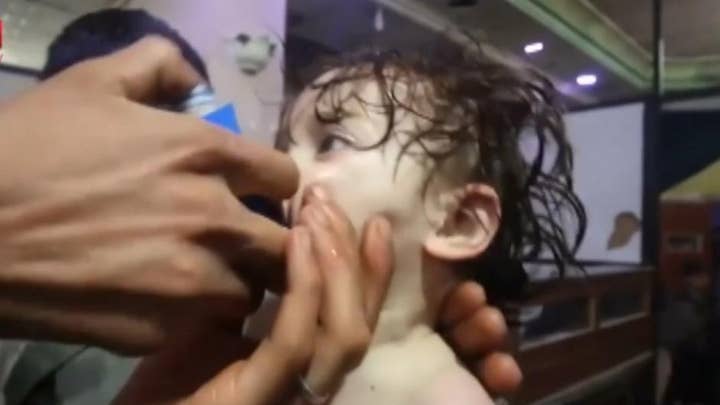 “Only a monster does this,” Haley argued. “Only a monster targets civilians, and then ensures that there are no ambulances to transfer the wounded. No hospitals to save their lives. No doctors or medicine to ease their pain. I could hold up pictures of all this killing and suffering for the Council to see, but what would be the point? The monster who was responsible for these attacks has no conscience to be shocked by pictures of dead children.”

The U.N. ambassador also hit Russia and Iran for their alleged roles in “enabling the Assad regime’s murderous destruction.”

“Russia and Iran have military advisers at the Assad regime’s airfields and operations centers. Russian officials are on the ground helping direct the regime’s ‘starve and surrender’ campaigns, and Iranian allied forces do much of the dirty work. When the Syrian military pummels civilians, they rely on the military hardware given by Russia. Russia could stop this senseless slaughter, if it wanted. But it stands with the Assad regime and supports it without hesitation,” Haley said.

“The United States is determined to see that the monster who dropped chemical weapons on the Syrian people held to account,” Haley continued, emphasizing that “meetings are ongoing” and “important decisions are being weighed as we speak.” 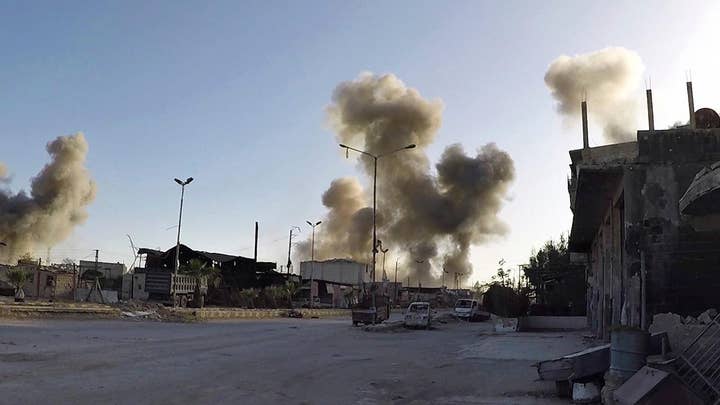 Haley also said: “We are beyond showing pictures of dead babies. We are beyond appeals to conscience. We have reached the moment when the world must see justice done. History will record this as the moment when the Security Council either discharged its duty or demonstrated its utter and complete failure to protect the people of Syria. Either way, the United States will respond.”

Haley’s comments followed reports earlier Monday that Israel conducted an airstrike on an Assad air base in Syria on Sunday night. The airstrikes reportedly killed 14 people, including Iranians, at a military airport near the city of Homs.