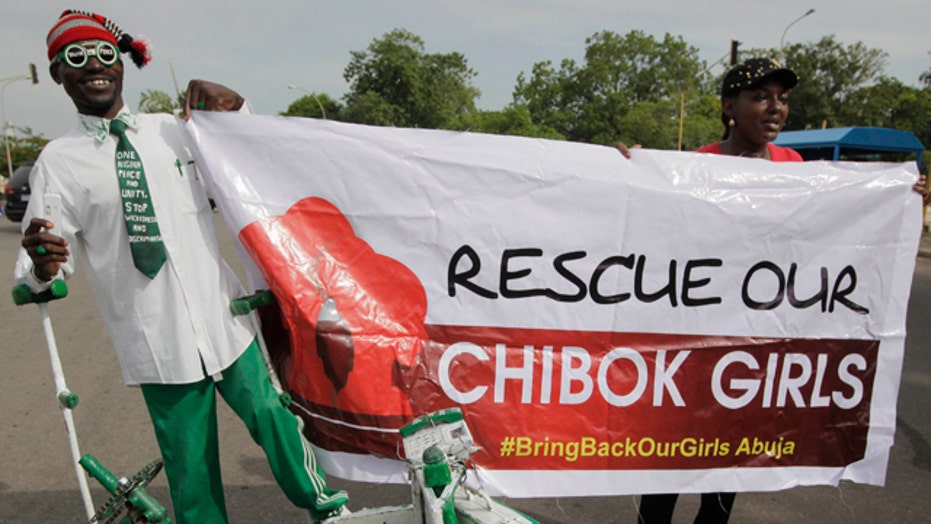 Nigeria offered a 50 million naira ($300,000) reward Wednesday to anyone with information that could lead to the rescue of almost 300 schoolgirls abducted by Boko Haram extremists last month.

According to Reuters, police urged Nigerians to call in with "credible information."

Boko Haram insurgents are holding the 276 teenage girls hostage and are threatening to sell them into slavery.

"I abducted your girls," Abubakar Shekau, Boko Haram's leader, said in a video Monday, describing the girls as "slaves" and said "By Allah, I will sell them in the marketplace."

The hour-long video starts with fighters lofting automatic rifles and shooting in the air as they chant "Allahu akbar!" or "God is great."

The U.S. has offered to send a team to Nigeria to help the search efforts.

A senior federal law enforcement source told Fox News that although the FBI has a permanent presence in Lagos, Nigeria, it is, "still unclear, what, if any, supplemental resources FBI is providing."

The FBI's elite Hostage Rescue Team is not in play at this time, the source said.

Islamic militants killed hundreds of people in an attack on a border town in Nigeria's remote northeast, a state government official said Thursday.

Shops and homes were set ablaze and razed in the attack Monday night on Gamboru Ngala, on Nigeria's border with Cameroon, Borno state information commissioner Mohammed Bulama told The Associated Press by telephone.

He said the fatality "figures are high -- hundreds -- but we are still awaiting details from the military authorities."

As many as 300 people were killed in the attack, according to local newspapers. The militants sprayed gunfire into the crowds of people at a busy market that is open at night when temperatures cool in the semi-desert region, reported ThisDay newspaper.

Nigerian federal Senator Ahmed Zannah said the attack lasted about 12 hours, according to the newspaper. The insurgents set homes on fire and gunned down residents who tried to escape from the flames, reported the paper.

Fox News' Shayla Bezdrob and The Associated Press contributed to this report.