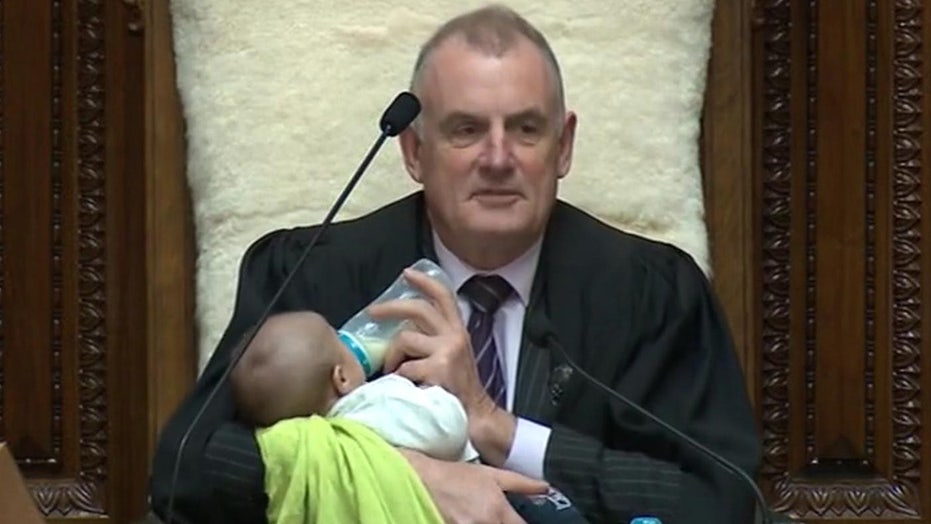 A New Zealand lawmaker took a page from the country’s prime minister when he brought his newborn son to work on Wednesday.

Tamati Coffey, a Labour representative for Waiariki, attended his first parliamentary debate after returning from paternity leave. He brought his son Tutanekai Smith-Coffey, who was born in July, to sit with him.

A picture of him holding the baby in parliament was shared by Green Party MP Gareth Hughes on Twitter.

“Lovely to have a baby in the House, and what a beautiful one @tamaticoffey,” Hughes wrote.

Meanwhile, the cuteness level rose tenfold when Speaker Trevor Mallard took on the role of babysitter.

“Normally the Speaker’s chair is only used by Presiding Officers but today a VIP took the chair with me,” Mallard, a father of three, said in a tweet sharing two photos from the session.

Coffey, who welcomed baby Tutanekai with his partner Tim Smith via surrogacy, told Newshub that he felt “really supported” by his colleagues in parliament.

“Babies have a way of calming down the intense environment of Parliament and I think we need more of them around to remind us of the real reason we are all here,” he said.

Last September, Prime Minister Jacinda Ardern made history when she brought her daughter Neve Te Aroha to the U.N. General Assembly. Ardern, who is only the second elected leader to give birth while in office after Pakistan's Benazir Bhutto in 1990, was speaking at the Nelson Mandela Peace Summit.

Australian senator Larissa Waters also made history in 2017 when she became the first woman to breast-feed a baby in the country’s federal parliament.