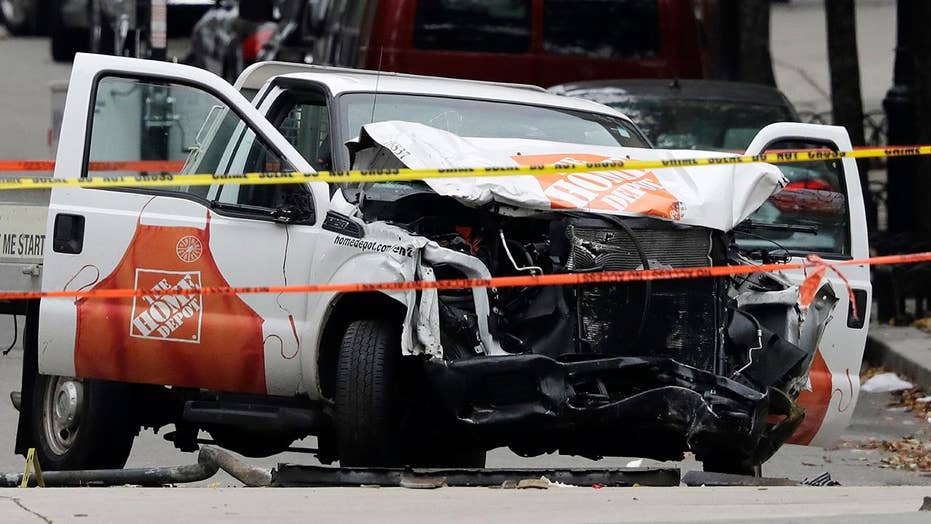 Greg Palkot reports on string of incidents where terrorists use vehicles to attack.

The New York truck attack is just the latest in a string of deadly strikes by terrorists using vehicles. For jihadists, trucks and cars are fast becoming the weapons of choice.

In London there have been two such attacks just this year, with a total of 13 deaths and dozens of injured, while in Barcelona a van smashed through a pedestrian street in August and killed 14.

Last year, a terrorist driving a truck struck a Christmas market in Berlin and left 13 dead. Earlier in the year a shocking truck attack in Nice, France left 86 people dead.

The terror group Islamic State took credit for many of these attacks.

“[This kind of attack] is highly encouraged by ISIS because it’s simple, because it’s easy and because people have access to it,” Mansour Al-Hadj of the Washington–based Middle East Media Research Institute (MEMRI) said.

In online articles, the group extolls the "deadly and destructive capability of motor vehicles."

For one, experts say, a truck or car is easier to access and deal with than explosives and weaponry, and can do as much harm. Also, with security high around sensitive sites, vehicles can more easily hit vulnerable targets. And they are hard to fight against.

“It’s impossible to prevent all of these attacks,” according to Karin Von Hippel, director general of London’s Royal United Services Institute, “especially when it’s on the amateur side of the coin.”

The danger of this technique is that it can easily prompt copycat attacks.

“People aren’t that creative, basically,” Von Hippel went on to say. “They see what works elsewhere, what causes havoc elsewhere, and then they do the same thing.”

And maybe more. As IS loses ground on the battlefield in Iraq and Syria, it could send its fighters back to the home front. Being such a simple and effective weapon, the fear is that brutality on wheels will only increase across the world.