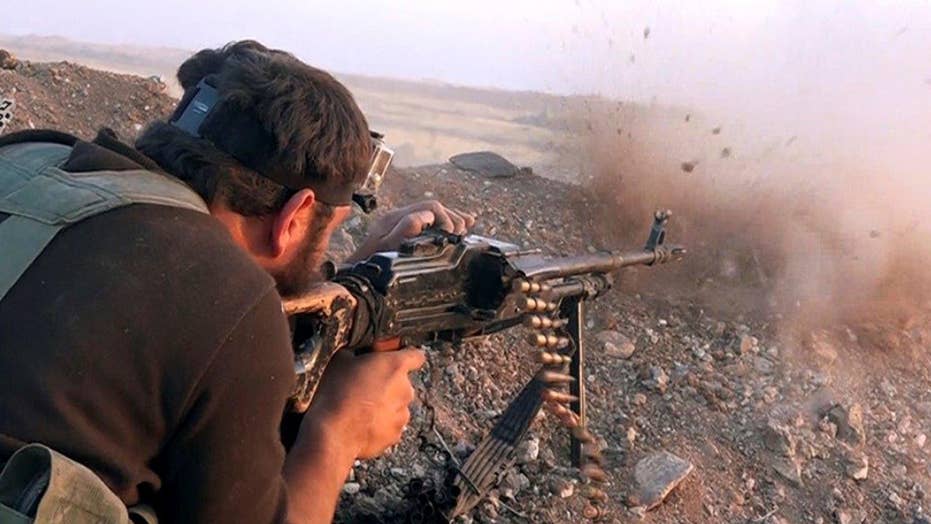 A U.S.-hosted meeting of major world and regional powers made only piecemeal headway on creating a new, multilateral track for ending the beleaguered country's grinding war.

U.S. Secretary of State John Kerry convened top diplomats from Russia and regional powers like Saudi Arabia, Turkey and Iran on Saturday for a 4 1/2-hour meeting in Switzerland. The talks came amid heightened urgency about the city of Aleppo, the latest flashpoint in a war that has killed up to a half-million people, sparked a refugee crisis and offered a territorial base to the radical Islamic State (ISIS) group.

Ministers put a brave face on the Lausanne meeting, which Kerry said was "exactly what we wanted" -- a statement that testified mostly to low expectations. The main result was pledges to resume contact on Monday.

"Nobody wants to do this in a sloppy way," said Kerry, who only recently accused Moscow of war crimes.

Russia has put a priority on separating Al Qaeda-linked militants on a U.N.-designated list of terrorist organizations from "moderate" rebels backed by the United States. For that to happen, Washington says the aerial onslaught in eastern Aleppo must stop.

Neither side has budged in the chicken-and-egg dispute over months of negotiation.

Kerry said the discussion was driven by the "urgency of Aleppo, the urgency of trying to find something that works other than military action."

Ministers offered suggestions that "really might be able to shape some different approaches," he said, without elaborating. No official news conference or joint statement followed Saturday's meeting.

The Syrian-Russian offensive in Aleppo prompted the U.S. to end discussions this month over a proposed military alliance against ISIS and Al Qaeda-linked militants. Last week, Kerry accused both parties of war crimes for targeting hospitals and civilian infrastructure in the Arab country.

Nevertheless, Kerry reunited with Russian Foreign Minister Sergey Lavrov at the lakeside Beau-Rivage Palace in Lausanne, speaking with the Russian for almost 40 minutes before the larger gathering. For all the talk in Washington about a possible Plan B, U.S. hopes for diplomatic progress appeared to rest squarely on Russia's cooperation.

"There are a few ideas we discussed today in this circle of countries that can influence the situation," Lavrov told Russian news agencies. "We agreed to continue contacts in the next few days aiming at agreements that could advance the settlement. We spoke clearly in favor of a quick launch of a political process."

On Saturday, Syrian and Russian airstrikes hit several rebel-held Aleppo neighborhoods amid clashes on the front lines in Syria's largest city and onetime commercial center, according to the Britain-based Syrian Observatory for Human Rights and the Aleppo Media Center, an activist collective. Also, opposition fighters backed by Turkish airstrikes launched an offensive to try to capture Dabiq from ISIS, which confers special status to the northern Syrian town in its ideology and propaganda.

In another sign that Turkey and Russia have repaired relations since last year's Turkish downing of a Russian fighter plane, Turkish Foreign Minister Mevlut Cavusoglu appeared to endorse Russia's position on the significance of U.S. and Turkish-backed opposition forces separating themselves from Al Qaeda-linked militants.

"There was no resolution on the cease-fire," Cavusoglu acknowledged.

Despite fiercely criticizing Syria and Russia, the United States doesn't seem to have an answer.

President Barack Obama and the Pentagon have made clear their opposition to any U.S. military strikes against Syria President Bashar Assad's military. The U.S. is uneasy with providing more advanced weaponry to the anti-Assad rebels because of their links to extremist groups. And sanctions on Moscow are seen as unlikely step, given their limited impact after Russia's annexation of Ukraine's Crimea territory in 2014 and the weak appetite among America's European partners for such action.

Underscoring the lack of options, Obama directed his national security team on Friday to renew diplomatic efforts to reduce the bloodshed in Syria.

But it's unclear how the larger format for discussions might change Russia's calculus.