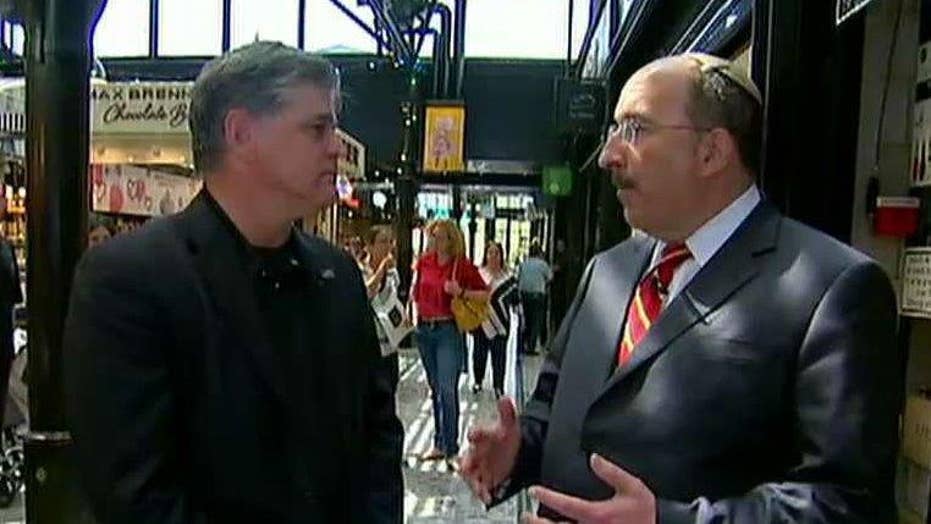 'Hannity' visits the site of terror attack in Israel

The spokesman for Israel Prime Minister Benjamin Netanyahu told Fox News' "Hannity" Thursday that peace between the Israelis and Palestinians requires "the fundamental acceptance of the Jewish State."

David Keyes spoke to Sean Hannity at the Sarona Market in Tel Aviv, where Palestinian terrorists shot and killed four Israelis and murdered 16 others last year.

"They ordered brownies. They were dressed in suits. They tried to blend in," Keyes said of the attackers, "and they stood up and they murdered four people in cold blood."

Keyes noted that "every time we’ve had a real partner for peace, Israel has actually worked out peace deals which have lasted decades, [as] in the case of Egypt and Jordan."

"Look, everyone in this region deserves to live in peace," Keyes added, "and there’s nobody who would want peace more than the Israeli people and the Israeli Prime Minister."

Hannity also toured the market with Dore Gold of the Jerusalem Center for Public Affairs, who decried Palestinian leader Mahmoud Abbas for "rewarding those who engage in terrorism."

"The real stumbling block for making peace," Gold said, "is the culture of hatred that the Palestinian Authority has built."