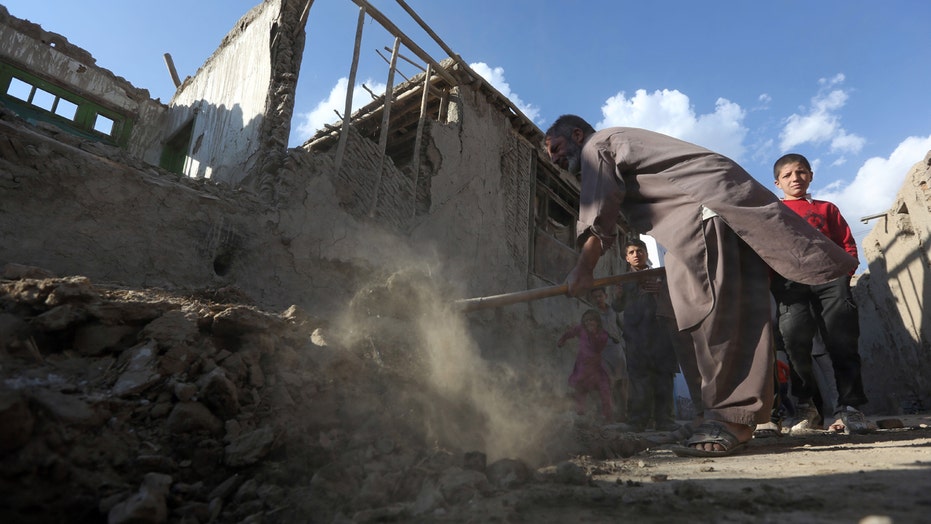 Rescuers were struggling to reach quake-stricken regions in Pakistan and Afghanistan on Tuesday as officials said the combined death toll rose to 339.

Afghan authorities were scrambling to access the hardest-hit areas near the epicenter. Teams on foot were sent to the most remote regions to assess damage and casualties, but air relief drops were not expected to begin for some days.

According to Afghan and Pakistani officials, 258 people died in Pakistan and 78 in Afghanistan in the magnitude-7.5 quake, which was centered deep beneath the Hindu Kush mountains in Afghanistan's sparsely populated Badakhshan province that borders Pakistan, Tajikistan and China. Three people died on the Indian side of the disputed region of Kashmir.

In Pakistan, the Swat Valley and areas around Dir, Malakand and Shangla towns in the mountains of Khyber Pakhtunkhwa province were also hard-hit. Officials said 202 of the dead were killed in Khyber Pakhtunkhwa.

The Pakistani town closest to the epicenter is Chitral, while on the Afghan side it is the Jurm district of Badakhshan.

More than 2,000 people were injured in Monday's temblor, which also damaged more than 4,000 homes in Pakistan, officials said.

In Afghanistan, Qameruddin Sediqi, an adviser to the public health minister confirmed 78 dead and 466 wounded, based on numbers reported by hospitals across the country.

"We believe the exact numbers are much higher because not all people bring the bodies to the hospitals so there are many that are not being counted. And there are still areas we don't have access to so we are not aware of the situation there," he said.

Badakhshan Gov. Shah Waliullah Adeeb said more than 1,500 houses there were either destroyed or partially destroyed.

The province's casualty figures of 11 dead and 25 injured "will rise by the end of the day, once the survey teams get to the remote areas and villages," Adeeb said.

Helicopters were needed to reach the most remote villages, many inaccessible by road at the best of times, he added. Now, landslides and falling rocks have blocked the few existing roads. Food and other essentials were ready to go, he said, but "getting there is not easy."

Badakhshan is one of the poorest regions of Afghanistan, despite vast mineral deposits. It is often hit by earthquakes, but casualty figures are usually low because it is so sparsely populated, with fewer than 1 million people spread across its vast mountains and valleys. It also suffers from floods, snowstorms and mudslides.

In Baghlan, southwest of Badakhshan, Jawed Bahsarat, spokesman for the provincial police chief reported at least three dead and 31 wounded. More than 350 houses had been destroyed or damaged. He too said the number was expected to rise as officials and relief workers reached remote districts.

Nangarhar province on the eastern border with Pakistan was particularly hard hit, despite its distance from the epicenter. Enamullah Maikheil, spokesman for the Nangarhar public health hospital, said at least 28 people died and 141 were wounded. More than 1,000 homes were destroyed and many livestock killed.

In Pakistan, casualties and damage were also being assessed, said Ahmad Kamal, the spokesman for Pakistan's National Disaster Management Authority. Bajur tribal region bordering Afghanistan was also affected by the quake, with dozens of homes damaged in other tribal regions.

Helicopters and military planes were transporting relief supplies and military engineers were working on restoring communication lines disrupted by landslides, said Lt. Gen. Asim Saleem Bajwa, the army spokesman. The landslides were also hampering rescue attempts in some areas, and roads were being cleared to ease access.

A magnitude-7.6 quake hit Pakistan on Oct. 8, 2005, killing more than 80,000 people and leaving more than 3 million homeless, most of them in the northwest of the country and in the divided region of Kashmir.

That quake was much shallower than Monday's - 10 kilometers (6 miles) below the surface, compared to the depth of 213 kilometers (130 miles) on Monday - and thus caused greater damage, said Mohammad Hanif, an official at the Meteorological Department.

In the Swat Valley town of Mingora, resident Jamal Ali Shah said the earthquake "was like the Day of Judgment." He sobbed as he sat outside his damaged home with his belongings around him, fearing the building would collapse in an aftershock.

Pakistan's Prime Minister Nawaz Sharif visited the earthquake-hit town of Shangla in the northwestern Khyber Pakhtunkhwa province, where at least 49 people were killed and 80 were injured in the earthquake.

He said his government would soon announce a relief package to help quake victims.

Monday's quake shook buildings in the capital, Islamabad, and cities elsewhere in Pakistan and Afghanistan for up to 45 seconds in the early afternoon, creating cracks in walls and causing blackouts.

In Afghanistan's Takhar province, 12 students at a girls' school were killed in a stampede as they fled a shaking building.

Sonatullah Taimor, a spokesman for the governor of Takhar province, said so far authorities had recorded 14 people dead there - including the schoolgirls. More than 50 were injured and 200 houses destroyed. He said food, blankets and tents were in short supply, though people had been warned to sleep outside - in near-freezing temperatures - in case of aftershocks.