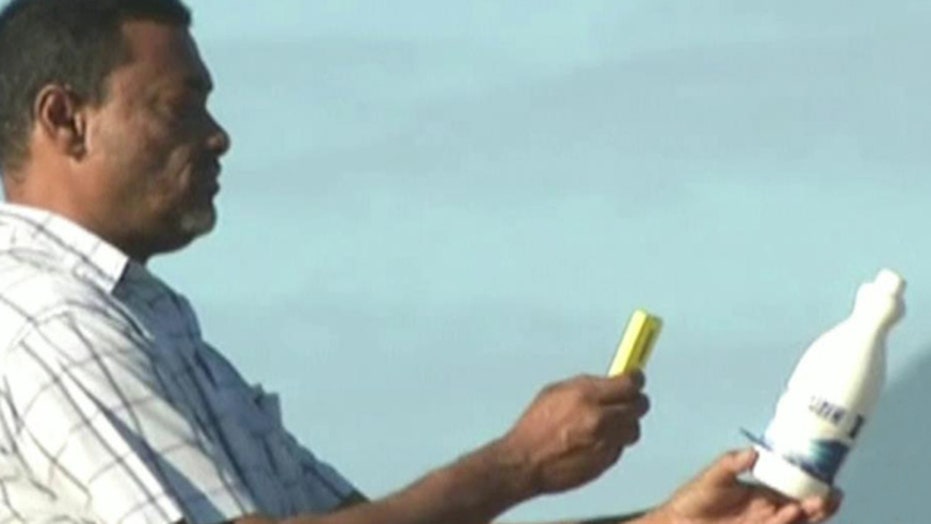 Local workers on a Reunion Island beach in the Indian Ocean found more debris-- including a bottle of laundry detergent from Jakarta, Indonesia Friday-- which could be further evidence of wreckage believed to be from missing Malyasia Airlines Flight MH370.

A Malaysian official and aviation experts said Thursday that a sea-encrusted section of a plane wing found washed up on Reunion Wednesday is almost certainly part of the Boeing 777, potentially the biggest breakthrough in the search for the missing jet.

Items found on the Saint Andre beach on the western coast of the French island east of Madagascar Friday will be examined by a team of experts looking to determine if they came from the plane that’s been missing since March 8, 2014 with 239 passengers and crew onboard.

Malaysian investigators are expected in Reunion Friday, and debris will be sent to a French military laboratory near Toulouse -- the hub of Europe's aerospace industry --for examination. The wing part--which could arrive Saturday morning, according to the Paris prosecutor's office-- will be analyzed in special defense facilities used for airplane testing and analysis, according to the French Defense Ministry.

July 31, 2015 - A liquid soap container label-- marked Jakarta, Indonesia-- was part of newly-discovered debris washed onto the beach at Saint-Andre on the French island of Reunion in the Indian Ocean. French authorities are studying a piece of plane debris found on Reunion Island to determine whether it came from missing Malaysia Airlines Flight MH370. (REUTERS)

Philippe Siden, who is leading the cleanup operation on Reunion Island, explained what he found to Reuters.

The jet was en route from Kuala Lumpur to Beijing when it disappeared, creating one of the most baffling mysteries in aviation history.

The plane piece was found washed up on Reunion, a volcanic island of 850,000 people, located roughly 2,300 miles from the broad expanse of the southern Indian Ocean off Australia where search efforts have focused. Officials and experts said currents could have carried wreckage that way, thousands of miles from where the plane is thought to have crashed.

If investigators can confirm the debris is from MH370, experts will try to retrace its drift back to where the bulk of the plane likely sank on impact. But they cautioned there's no guarantee investigators can find the plane's vital black box recorders or other debris, and would be unlikely to provide any more precise information about the jet’s final resting place.

A multinational search effort now focused on the southern Indian Ocean has come up empty.

"Nothing has been confirmed, but obviously this is, by far, the most encouraging sign so far," Australian Prime Minister Tony Abbott told Sydney radio station 2SM. "We have long thought it went down somewhere in the Indian Ocean and, at last, it seems that we may be on the verge of some confirmation."

A French law enforcement helicopter is scouring the waters around Reunion in hopes of spotting more debris, and Malaysian authorities were headed to the island and to Toulouse.

Environmental worker Johnny Begue, 46, told The Associated Press that he stumbled across the plane part on Wednesday morning while collecting stones to grind spices. A colleague, Teddy Riviere, corroborated his account, but authorities wouldn't say who discovered the component.

"I knew immediately it was part of an aircraft, but I didn't realize how important it was, that it could help to solve the mystery of what happened to the Malaysian jet," Begue said.

Begue told Reuters Friday he and co-workers are hoping what they find on the beach will help the victims’ families find answers.“It's been a while that they've been looking for their loved ones. I don't know if this piece of wreckage really belongs to the MH370 but if it is, the families can start getting some closure,” Begue said.

July 30, 2015 - Johnny Begue (R), who found plane debris Wednesday on this beach in Saint-Andre, on the French Indian Ocean island of La Reunion, walks with his friend Andre Tevane. Begue found a flaperon, which help pilots control an aircraft in flight, on Wednesday. French authorities are studying the piece to determine whether it came from Malaysia Airlines Flight MH370. (REUTERS)

"The most important part of this whole exercise at the moment is to give some kind of closure to the families," said Australian Transport Minister Warren Truss, whose country is leading the search for the plane in a desolate stretch of ocean off Australia's west coast.

Ghyslain Wattrelos, a French businessman whose wife and two children were on the doomed flight, told French BFMTV the debris discovery  had been "extremely painful."

"This doesn't give hope, this is a moment I have been fearing," he said. "As long as there wasn't any evidence of a crash, of wounded, of dead or whatever, there was a little glimmer of hope for us."

Jacquita Gomes, whose husband, Patrick, was a flight attendant on the missing plane, is anxious for the results of the analysis, but wants authorities to ensure they're conclusive before announcing them. "It's going to be a nail-biting weekend but we cannot rush it," said Gomes, of Kuala Lumpur. "We have been waiting for more than 500 days. The agony continues and I hope there will be answers soon."

Air safety investigators, including one from Boeing, have identified the component as a "flaperon" from the trailing edge of a Boeing 777 wing, a U.S. official said. The official wasn't authorized to be publicly named.

"It is almost certain that the flaperon is from a Boeing 777 aircraft," Malaysian Deputy Transport Minister Abdul Aziz Kaprawi told Reuters.

Investigators have found what may be a maintenance number on the wing piece, which may help investigators figure out what plane it belongs to, Truss said.

Truss expects French investigators will also try to determine how the part separated from the rest of the aircraft, and whether it shows evidence of fire or other damage, which might explain how the plane crashed.

The fact that the part was found 2,600 miles from the current search site does not mean officials are looking in the wrong place, said Australian Transport Safety Bureau Chief Commissioner Martin Dolan, who is leading the hunt. It actually gives them reassurance that they're in the correct spot, given that ocean modeling predicted that currents would eventually carry any floating wreckage to the African coast. The discovery is therefore unlikely to alter the seabed search, he said.

"We remain highly confident in our work defining the search area," Dolan said.

Over the past 16 months, hopes have repeatedly been raised and then dashed that the plane, or parts of the plane, had been found. In the end, none was from Flight 370.

In Beijing Zhang Qian, whose husband, Wang Houbin, was on the plane, said she hopes this is not another false lead.

"I don't want to see any news about suspected debris," she said. "What I want is a verified result."

Meanwhile, Zhang Qihuai, a lawyer representing some of the passengers' families in China, said a group of about 30 relatives had agreed to proceed with a lawsuit against the airline if the debris was confirmed to be from MH370.

"When we find things like that we are able to investigate whether similar parts or similar manufacturers of parts have come under scrutiny in the past," Wheeler said.

If Boeing was found by expert evidence to be the cause of the accident, families may seek to sue the aircraft manufacturer in the U.S., helping them claim millions of dollars in compensation, Wheeler said.

Boeing declined to comment on widely circulated photos of the debris.

But Daniel Rose, a partner at the Kreindler & Kreindler firm in New York-- which represents more than 50 victims' families-- said the discovery was unlikely to trigger a wave of lawsuits.

Families are pursuing a settlement with insurer Allianz through Kreindler, he said, but the firm could sue before a two-year statute of limitations under the Montreal Convention-- which governs such accidents-- expires in March 2016.