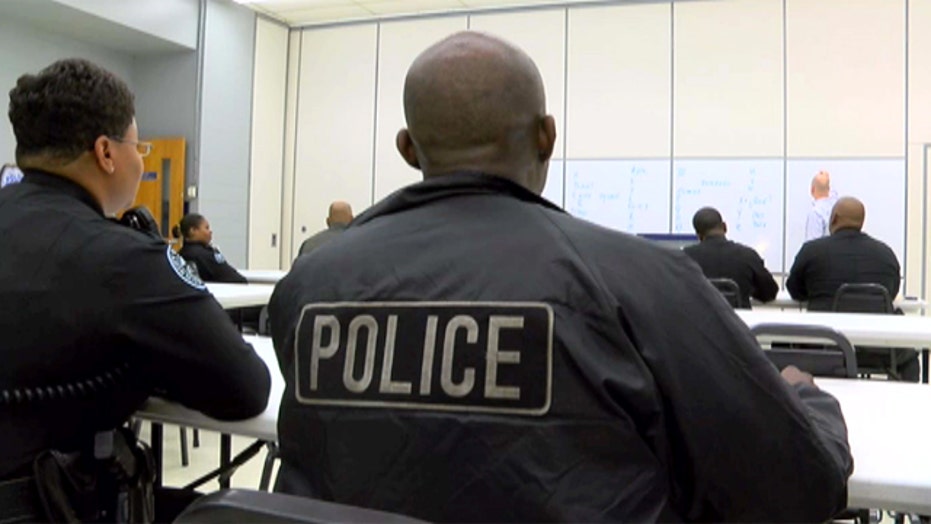 Kyle Rothenberg reports how studying the Spanish language is mandatory for police officers in Jackson, Mississippi

“The purpose of this program is for our officers to learn basic commands,” said Vance. “We’re not looking to make anybody fluent.”

Each Spanish class is two-hours long and mandatory for all officers. If an officer refuses to attend the class – which has never happened – he or she could face disciplinary action that will be determined on a “case by case basis,” a police spokeswoman said.

“The program is designed for people who have no knowledge of the Spanish language,” said Dr. Brian Phillips, who is one of the professors teaching the class on a volunteer basis. He believes it is critically important for first responders — like police officers — to learn Spanish.

“Anytime you have a life-threatening situation, you could be causing problems for that person who does not understand the system when there is a language barrier,” said Phillips.

Latinos have been drawn to Mississippi the past few decades because of the state’s burgeoning chicken processing industry. Jackson, the state’s capital and its largest city, has a population of about 200,000 – roughly 2 percent of whom are Latino, according to the latest U.S. Census data.

The Spanish class started in early February and was created in partnership with a group called Bilingual Works to better serve the growing minority population during times of crisis. Funding is also provided by Bilingual Works, according to the program’s President Enrique Diaz.

Other Jackson city departments who employ first responders – including firefighters – are also taking the class.

“If there is an emergency and someone is trying to get help – it could be a life or death situation,” Diaz said. “If there is a language barrier, that person could die.”

But some critics do not fully agree with Jackson Police Department’s decision to have all their officers learn Spanish.

“We should be encouraging legal immigrants to become citizens learning English,” said Bob Dane, spokesperson for the Federation for American Immigration Reform. “It is a disincentive for immigrants to learn English when we fully accommodate their every need and the language of their choice.”

Local Hispanics in Jackson said they hear a lot of stories about their community having a hard time communicating with police, which they said it leads to unnecessary arrests because of a minor misunderstanding.

“It’s been pretty bad for [Latinos]” said Marco Lopez, owner of Taqueria La Guadalupe restaurant in Jackson. Lopez said there have been situations where police arrive at a crime scene and the victim cannot communicate with the cops. “Sometimes it looks like police are not fair, but it’s just because they don’t understand what happened.”

Some Hispanic community leaders said Mississippi and other southern states have fallen behind on figuring out how to properly communicate with minority groups.

“There’s been a major problem throughout the state,” said Mississippi Immigrant Rights Alliance Executive Director Bill Chandler. “Latino immigrants have been reluctant to call law enforcement," Chandler added, because the countries they come from have corrupt police departments.

Others say Mississippi is on the right track.

“It’s about time for Mississippi to get involved in the culture and other languages so they can communicate better with the community,” said Karla Vazquez, a legal assistant and interpreter for Elmore and Peterson, a local law firm in Jackson, Mississippi.

“I’ve been here [in Mississippi] since 2005 and I can see there is a lot of miscommunication,” said Vazquez, who grew up in Mexico. “I see it with police officers and I see it in court.”