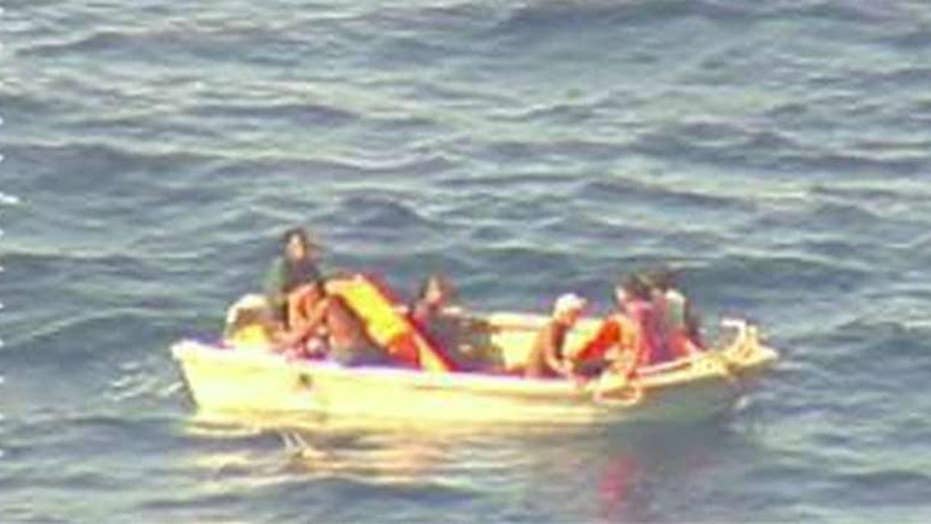 Six adults and an unconscious baby were rescued Sunday from a life raft in the Pacific Ocean after drifting for four days in the blazing sun without water.

The survivors had scrambled onto the small wooden dinghy after their ferry sank, authorities said.

While aboard the dinghy, they drifted for more than 110 miles from the nearest major island when they were found, and debris likely from the ferry was floating around the raft, officials said.

The ferry had been carrying at least 50 people while traveling between two islands in the remote nation of Kiribati, said Darryn Webb, New Zealand Defence Force air commodore. It was not yet clear what caused the ferry to sink, authorities said.

The search crew on a military plane had used radar to locate the dinghy while searching for survivors.

The plane dropped supplies to the survivors -- including food, water and a radio -- while a fishing boat had changed its course to pick up the survivors Sunday afternoon.

"Our heart goes out to the baby and to all those remaining of the 50-plus people," he said.

While thankful the life raft was found, Webb said it was also heartbreaking the ferry had sunk and the others were still missing, as there has been no sign of any other survivors.

Questions remain as to why it took Kiribati authorities so long to tell New Zealand officials the ferry was missing.

New Zealand rescuers say they weren't told about the missing boat until Friday, eight days after the ferry had left. Webb said a Kiribati plane had earlier searched for the ferry but didn't have sophisticated radar equipment.

Kiribati is a remote, impoverished nation of 33 atolls that is home to about 108,000 people.