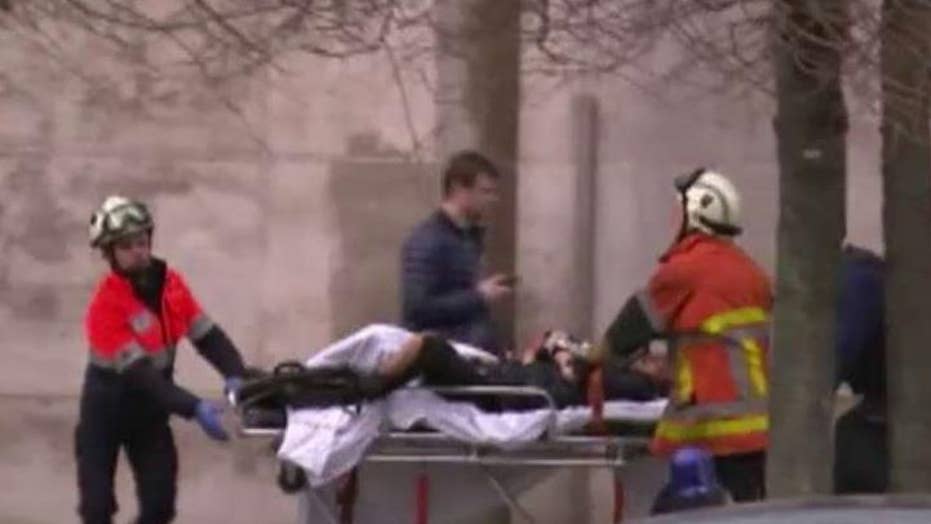 Why is Brussels such a hub for Islamic terror activity?

The three terror suspects seen on surveillance video Tuesday moments before bombs exploded at Zaventem Airport in Brussels should have raised alarms with security officials and even a vigilant public, said U.S. experts with foreign intelligence.

While it might be easy to sport red flags in retrospect, the trio believed responsible for an attack and came minutes before a coordinated attack at a nearby Metro station acted and dressed like terrorists, said Don Hubbard, a private security expert who once headed security worldwide for Trans World Airlines. Two wore black shirts and single gloves that investigators believe may have hidden detonating devices.

“If I saw men in the check in area, wearing a single glove, that alone would have been enough for me to take them aside and subject them to further scrutiny,” said Hubbard, a former FBI agent. “If I didn’t like how they answered questions, security would have potentially stopped any attack.”

ISIS claimed credit for the attacks, which together left 34 dead. The airport bombers are believed to have set off suicide vest bombs and possibly suitcase bombs laden with nails. The surveillance photo released by Belgian authorities contained several clues visible to trained eyes, but the solitary gloves were a dead giveaway, several told FoxNews.com.

“They were only wearing a glove on one hand. That should've been a red flag - an inconsistency with the norm,” said Tony Schiena, a security expert and trainer who heads the London-based Multi Operational Security Agency Intelligence Company (MOSAIC). “Only the left hand - to hide the detonator or possibly a “dead man” switch - meaning there's no backing out. Either way, the vest will detonate.”

Their clothing and behavior were other clues, said Ed Bridgeman, a professor and criminal justice expert who chairs the criminal justice and technology program at the University of Cincinnati.

“In the past, individuals have used a 'dead man’s switch' hidden in a single glove that allows them to trigger a detonator if they shot or get caught,” said Ed Bridgeman, a professor and criminal justice expert who chairs the criminal justice and technology program at the University of Cincinnati. “Behavioral clues are key. How were these men dressed?  Were they dressed for appropriately for the climate and a long airplane ride? Were they acting suspicious?”

The airport is one of Europe’s busiest, and the attacks came just after 8 a.m., when it was crowded. Still, airport security in other nations may have spotted the bombers before they were able to strike, said Bridgeman. The Israelis in particular, he said, have been carefully monitoring passengers coming through their airports for years, for both behavior and dress.

A former police officer, Bridgeman said, “We stopped the drug mules from using airlines years ago by looking for clothing and demeanor that stands out. PoIice officers also use this technique and scrutinize people’s mannerisms and appearance.”

Sharp-eyed plainclothes security officials should pay particular attention to the body language of passengers in the check-in lines, watching for things such as any dress that appears wrong for the season, and anything else about an individual that, based on the agents’ training and experience, seemed “wrong” or out of place, Hubbard said.

Late Tuesday, police were searching for the third person in the video, who did not wear a black glove and may have been an escort, according to authorities. He is believed to have possibly been wearing some sort of disguise, and was reportedly seen fleeing the airport following the explosions.

Part of the problem is there is no international standard for airport security. While some places, such as London, do a robust job of protecting travelers and profiling suspects, other places such as West Africa, are still lacking, said Wayne Black, owner of Wayne Black & Associates, a Florida-based company that specializes in security and threat assessment.

Federal agents at major airports in Miami and Los Angeles are trained in behavioral recognition, Black said, which is essential for security. But vigilance must be constant, he said.

“These attacks happen and we raise our guard for 30 days and then drop it,” Black said. “That’s just human nature.”

To spot potential danger, Bridgeman said, “You don’t have to have Marine recon or Navy SEAL training or be ‘ninja-like’ in perception.

Public awareness - and courage to speak up - is key to preventing terrorist attacks, he added.

“If you see something that is out of place, if it looks wrong, then it probably is,” Bridgeman said. “Then you have to take the next step to overcome political correctness injected into society and report it.”

The attack took place just four days after Salah Abdeslam, the main remaining suspect from November’s attack in Paris, was taken into custody. Interrogating Abdeslam and other information gathering also could have put Brussels police on better footing said Hanan "Richter" Yadin, president and CEO of the Texas-based Instinctive Shooting International and an Israeli who trains U.S. security forces for overseas combat.

“The question is where was intel?” Yadin asked. “Where was heighten security order in public transportation?”