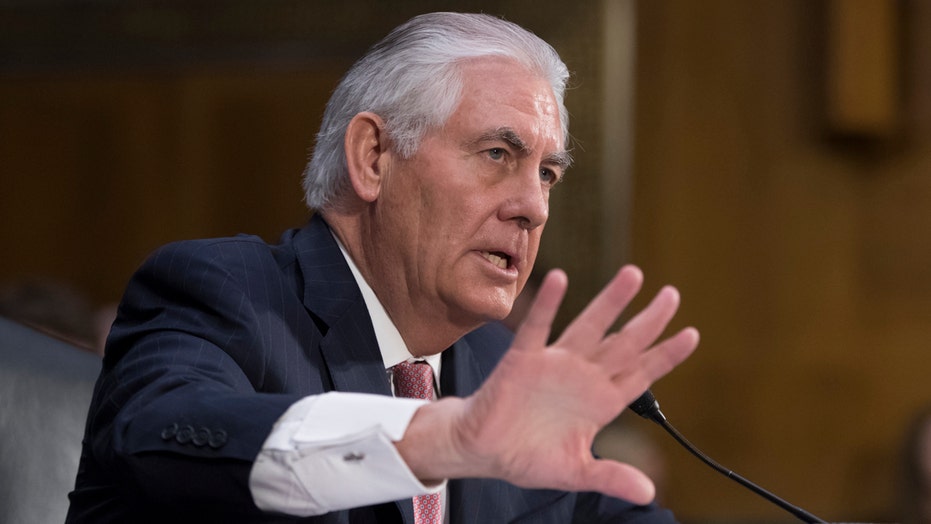 China escalated its war of words against the incoming Trump administration Friday, declaring in state media that Secretary of State nominee Rex Tillerson's warning over Beijing's military buildup in the South China Sea could signal the first shots of "a military clash."

During his confirmation hearing in front of the Senate Foreign Relations Committee on Wednesday, Tillerson accused Beijing of "declaring control of territories that are not rightfully China's," comparing its island-building efforts and deployment of military assets to Russia's 2014 annexation of Crimea -- an action that ended up prompting tough U.S. and European sanctions.

He added: "You're going to have to send China a clear signal that first, the island-building stops, and second, your access to those islands is also not going to be allowed."

CHOICE OF MATTIS TO RUN PENTAGON WINS SUPPORT FROM DEMOCRATS

China was quick on the saber-rattling in a Global Times op-ed. "China has enough determination and strength to make sure that his rabble-rousing will not succeed. Unless Washington plans to wage a large-scale war in the South China Sea, any other approaches to prevent Chinese access to the islands will be foolish."

Analysts suggested that Tillerson misspoke. Blocking Chinese access to the islands "could spark armed conflict," said Mark Fitzpatrick of the International Institute for Strategic Studies. "I can't help but think that he did not mean it this way."

Still, the Chinese op-ed continued, "If Trump's diplomatic team shapes future Sino-U.S. ties as it is doing now, the two sides had better prepare for a military clash."

An estimated $5 trillion of trade passes through the South China Sea each year. China has reclaimed more than 3,000 of acres of land and constructed military-grade infrastructure, and reportedly installed weaponry, on reefs and islets, mostly in the Spratly Island chain.

China denies any intent to restrict freedom of navigation but has objected when the U.S. Navy has sailed close to the islands.

Beijing frequently has used its media to fire back at President-elect Donald Trump and his team. After Trump suggested raising fees for Chinese imports in November, China threatened to slash the shipments, potentially leaving Americans without new iPhones.

"Large orders for Boeing planes would switch to Europe, U.S. auto sales in China would face setbacks, Apple phones would essentially be crowded out, and U.S. soybeans and corn would be eradicated from China," the Global Times warned.